The Saudi Arabian GP has been suspended after 14 laps to allow track workers to repair the Safer barriers at Jeddah's Turn 21.

Haas' Mick Schumacher lost control at the corner and veered off course and hit the barrier broadside.

Fortunately, the German emerged unscathed from the crash but the incident, which occurred after 10 laps with Lewis Hamilton leading the race from Valtteri Bottas and Max Verstappen, triggered a Safety Car which in turn incited both Mercedes drivers to pit for a set of hard tyres.

Verstappen remained on track however and assumed the lead.

But after three laps behind the Safety Car, race control deployed the red flag and cars made their way back to the pitlane.

However, as allowed by the rules, Red Bull will be able to execute a tyre change on Verstappen's car in the pitlane which equates to a free stop for the Dutchman who will therefore restart the race from first place.

But the Mercedes drivers will target reaching the end of the race on their hard tyres, as will leader Max Verstappen. 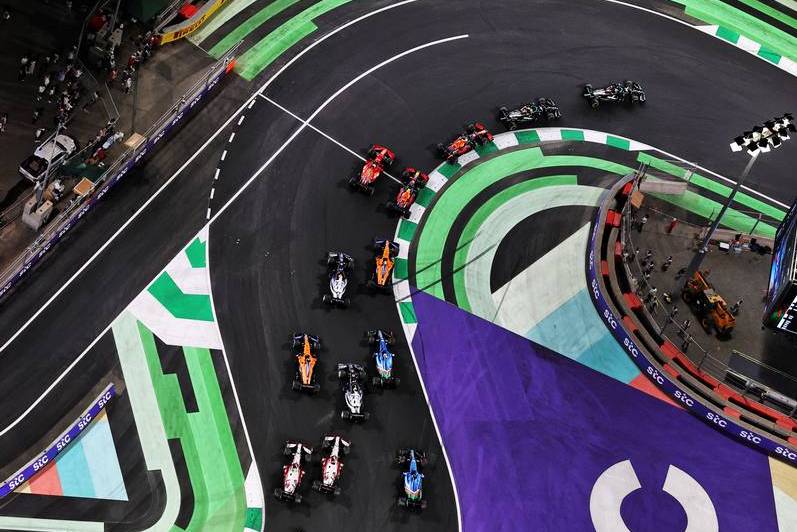 After a second standing start, Hamilton outran Verstappen to the first corner, but the Dutchman ran across the run-off area to reclaim the lead while Alpine's Esteban Ocon also overtook Hamilton.

However, two separate incidents brought out the red flag for the second time of the evening. Red Bull's Sergio Perez was touched from behind by Ferrari's Charles Leclerc which wreaked havoc among the field.

Further back, Nikita Mazepin collected the Williams of George Russell which created even more chaos.

Meanwhile, race director Michael Masi offered Red Bull the opportunity for Verstappen to give back to Hamilton the position illicitly gained. Red Bull accepted, thus leaving Ocon as the new leader, with Hamilton and Verstappen behind.

Or a rather unexpected leading trio!