Calderon's ROKiT-sponsored machine will be run by Foyt alongside the outfit's entries of full-time rookies Dalton Kellet and Kyle Kirkwood who will tackle all IndyCar rounds.

"I’m thrilled and very thankful to Jonathan Kendrick, ROKiT and AJ Foyt Racing for the opportunity to race in the NTT IndyCar Series," commented the 28-year-old racer.

"Ever since I started my single-seater career in the United States 11 years ago, IndyCar has been a reference for me and it’s a dream come true to be on the grid this year!

"I can’t wait to get to St Petersburg for the first race of the season! I’m well aware of the challenge ahead, but this is the chance of a lifetime and I’m keen on making the most of it."

2022 INDYCAR DRIVER ! A dream come true to be back in the🇺🇸 thanks to Jonathan Kendrick, @rokit and @AJFoytRacing for the opportunity! Can’t wait to Rokit! 🚀🏎 follow the #11 Rokit Chevrolet!😉 pic.twitter.com/4VqqhDNZ4i

Calderon, who has raced in the past two seasons in the Japanese Super Formula championship and in the WEC with Richard Mille Racing Team, tested with Foyt last summer at Mid-Ohio, and the outing obviously impressed team boss Larry Foyt.

"I’m thrilled with the continuation and expansion of the ROKiT AJ Foyt Racing Team," said Foyt.

"We welcome Tatiana Calderón in car number 11 joining Kyle Kirkwood in car 14, both in the very cool ROKiT liveries. Tatiana showed a lot of potential in her test at Mid-Ohio. With Dalton Kellett in the No. 4 K-Line Insulators Chevrolet, I think our three-car team is in for an exciting season.

Calderon's path to IndyCar started in karting in her native Columbia before she moved to single-seaters in 2011, first racing in the US and then in Europe where she eventually joined the junior ranks of GP3 before stepping up to the FIA Formula 2 Championship in 2019. 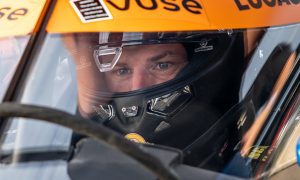