A brilliant last minute lap for Red Bull's Sergio Perez saw the Mexican claim his first ever Formula 1 pole position ahead of Ferrari drivers Charles Leclerc and Carlos Sainz, leaving Max Verstappen set to line up in fourth on the grid.

There was a huge shock at the end of Q1 when Lewis Hamilton missed the cut for the first time in over five years and was eliminated, meaning that the Mercedes will start from 16th place on the grid in tomorrow's Saudi Arabian Grand Prix.

The first round also saw a heavy accident for Williams Nicholas Latifi, while Yuri Tsunoda played no part in the session after suffering further reliability issues with the AlphaTauri. There was also a huge accident for Mick Schumacher in Q2 that puts the Haas driver's participation in tomorrow's race in doubt.

After the fraught meetings in the early hours about the security situation in Jeddah following the missile strike on an oil depot on the outskirts of the city, Formula 1 had made the decision to proceed with this weekend's event. Today teams and drivers refocussed on final practice, with Ferrari's Charles Leclerc just staying ahead of Red Bull's Max Verstappen in FP3. However that had been in daylight conditions, and the true test was how the order would be decided in the surprisingly chilly (for the desert) night time conditions after the sun had done down and the circuit lights came on for qualifying. 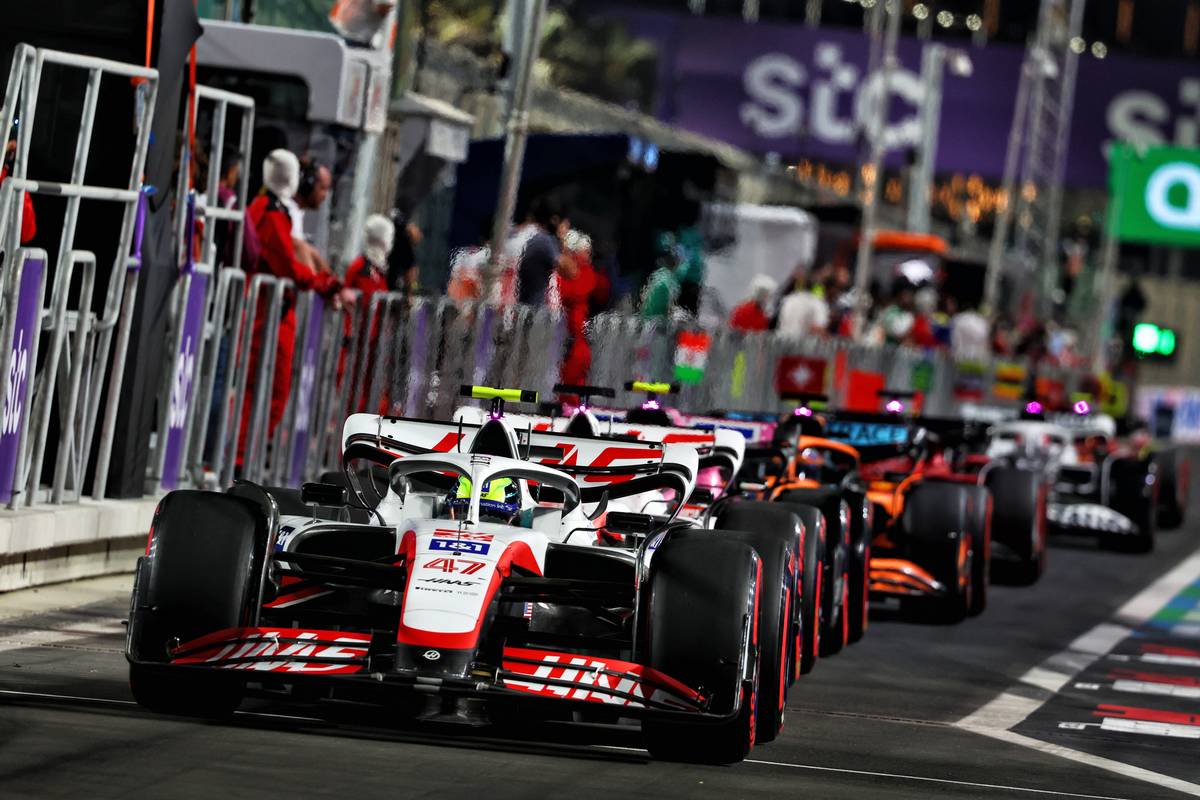 First to head out when the track went green were the two Haas cars of Kevin Magnussen and Mick Schumacher, but it wasn't long before they were joined by some of the big names including both Ferraris (Leclerc and Carlos Sainz) and Mercedes (Lewis Hamilton and George Russell), the latter pair bucking the trend for soft tyres by starting on sets of mediums. Confident in their pace, the Red Bulls were among the last to make a move.

The first time on the books came from Magnussen with a lap of 1:30.425s, a solid effort given his lack of running time so far this weekend and enough to keep him over a tenth ahead of his team mate as well as McLaren pair Lando Norris and Daniel Ricciardo. Russell picked up fifth on his initial run, but Hamilton slid wide and had to abandon his own.

The two Ferraris were just making their runs when the session was red-flagged for an accident for Nicholas Latifi, the Williams spinning into the barriers at the exit of turn 13: "I don't know how the rear just let go there," reported a winded Latifi as a result of the hard impact. "First time I had that limitation all weekend. Very strange, I have to understand why," he added after being checked over and released by the paddock medical centre. 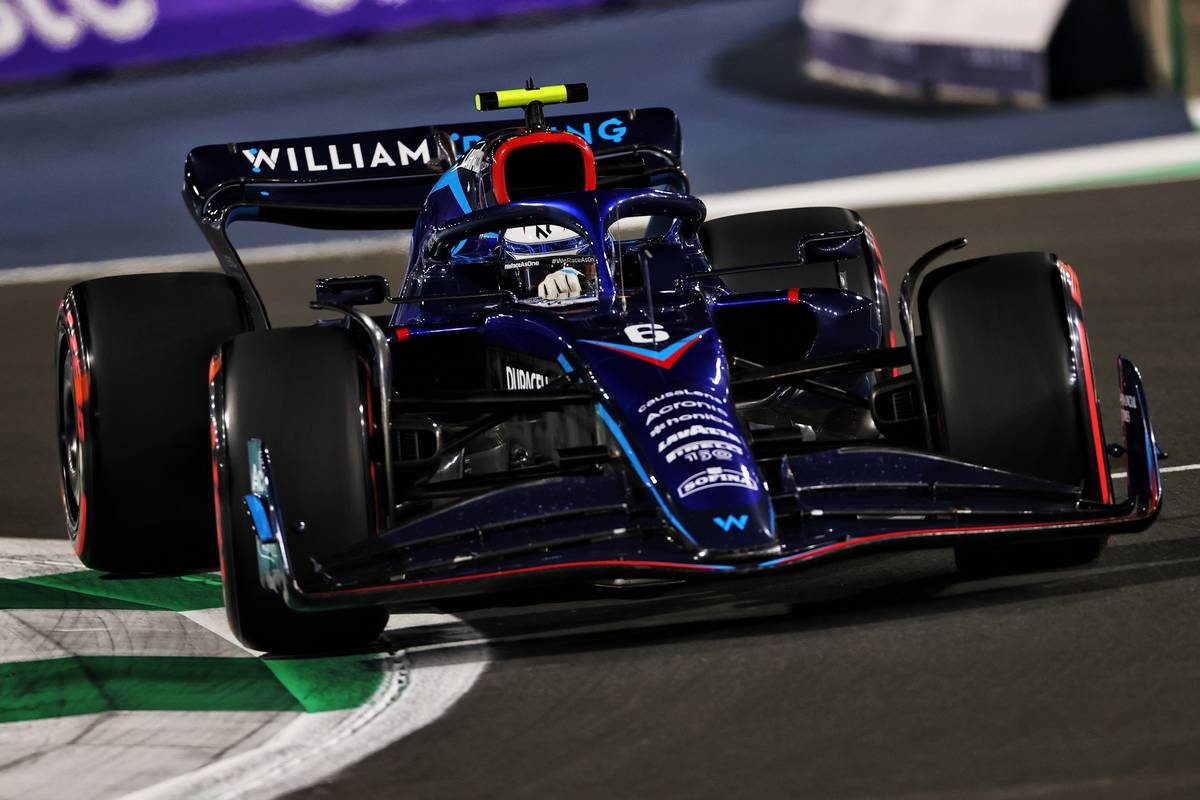 There were still just over 11 minutes on the clock when the session resumed after a seven minute delay while the FW44 was removed by track workers. A queue of cars yet to set a time was waiting at the end of pit lane to get a quick start, and Mercedes had switched their cars to the softs this time. It proved a short tour for Yuki Tsunoda who was summoned back to the AlphaTauri garage with more reliability issues after the team replaced a slew of engine components overnight after his juddering end of Friday's session.

Alfa Romeo's Valtteri Bottas briefly went to the top, but he was soon displaced by the Red Bulls of Verstappen and Sergio Perez, who in turn were deposed by the Ferraris with Sainz' 1:28.855s proving two tenths quicker than Leclerc and almost half a second ahead of Verstappen. Russell brought a dash of hope for Mercedes by slipping into fourth ahead of Bottas, Norris and Perez, but Hamilton was remarkably still struggling to get anywhere close to the top ten.

A better lap from Verstappen saw the Red Bull move to second within a tenth of Sainz, while Pierre Gasly and Kevin Magnussen were into the top ten. But Hamilton was still struggling badly and his latest run was not an improvement, and as a result he was pushed down into the elimination zone with just one more chance to scramble to safety along with Nico Hulkenberg and Alexander Albon, Tsunoda and Latifi having already been sidelined and out of the running.

Hamilton made a slight improvement that put him into 15th, but almost immediately the Aston Martin of Lance Stroll went quicker again. It meant Hamilton had dramatically missed the cut at the end of Q1 for the first time since Brazil 2017, a shocking outcome that no one had predicted coming into the evening session. "So sorry guys," a mortified Hamilton said over the Mercedes radio when he was told the news. "I just struggled with the balance of the car, not where we want to be ... Unfortunately just went the wrong way with the set up." The team told pit lane reporters that there was no glaring issue with the car but it had clearly lacked pace and they would need to dig into the data overnight. 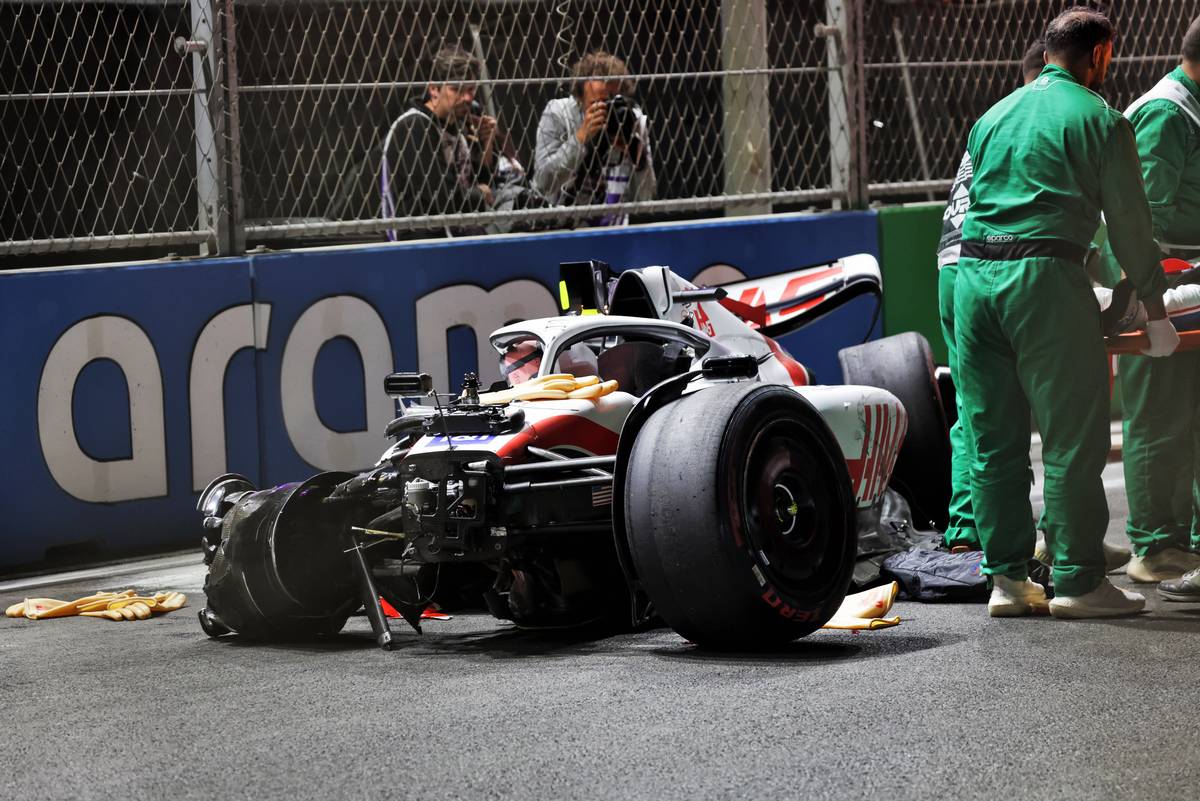 Both Haas cars had made it through to the second round and duly led the field back out on track when Q2 got underway, but it wasn't long before Leclerc was back at the top with a time of 1:28.883s which was a fraction ahead of Perez followed by Sainz and Alpine's Fernando Alonso, with Russell - now alone in flying the Silver Arrows banner, and the only car currently running on mediums - up to fifth place from Norris and Schumacher.

Verstappen was a little late arriving at the party but immediately picked up third, just a blink of an eye behind his team mate. Bottas also had some sweet revenge on his old team by going sixth, a tenth quicker than his Mercedes successor Russell. Left at risk of elimination at the end of the first runs were Guanyu Zhou, Daniel Ricciardo, Kevin Magnussen, Lance Stroll and Esteban Ocon. The Frenchman was distinctly unhappy after Ricciardo blocked his hot lap by moving across his path to avoid another car, an incident that will be reviewed by the race stewards after the end of qualifying.

Second runs were just beginning when Schumacher - provisionally through in ninth place at this point - got on the kerb at the exit of turn 10 which sent the Haas careening into the barrier in a very nasty impact. With the car's digital communications knocked out by the impact, there was evident concern about the driver as the medical car was scrambled. Schumacher had to be extracted from the race car on a medical back board, but was reported to be conscious and talking with the medics as he was driven back to the medical centre for evaluation and treatment. He was subsequently airlifted to the nearby hospital for further scans as a safeguard, but the team was relieved to report that he appeared "physically fine". However, whether he would be able to take part in Sunday's race remaines very much in doubt - even if the team could build a completely new car in time. "We need to see what position we are in with spare parts," commented team principal Guenther Steiner.

It took a while for the medics to do their work - for the shattered Haas to be scooped up, the carbon fibre debris to be swept up, oil spillage to be steamed off and the bent barrier repaired, with new race director Niels Wittich arriving on the scene to check the work before the session - now running almost an hour behind schedule - could resume with five minutes remaining in Q2. Magnussen and Leclerc led the field back into action and there was time for Sainz to go top by a tenth from Leclerc, while improvements from Gasly, Magnussen and Ocon left Russell squeaking through to the final pole shoot-out by just 0.033s in tenth which left Norris joining Ricciardo, Zhou, Schumacher and Stroll on the other side. 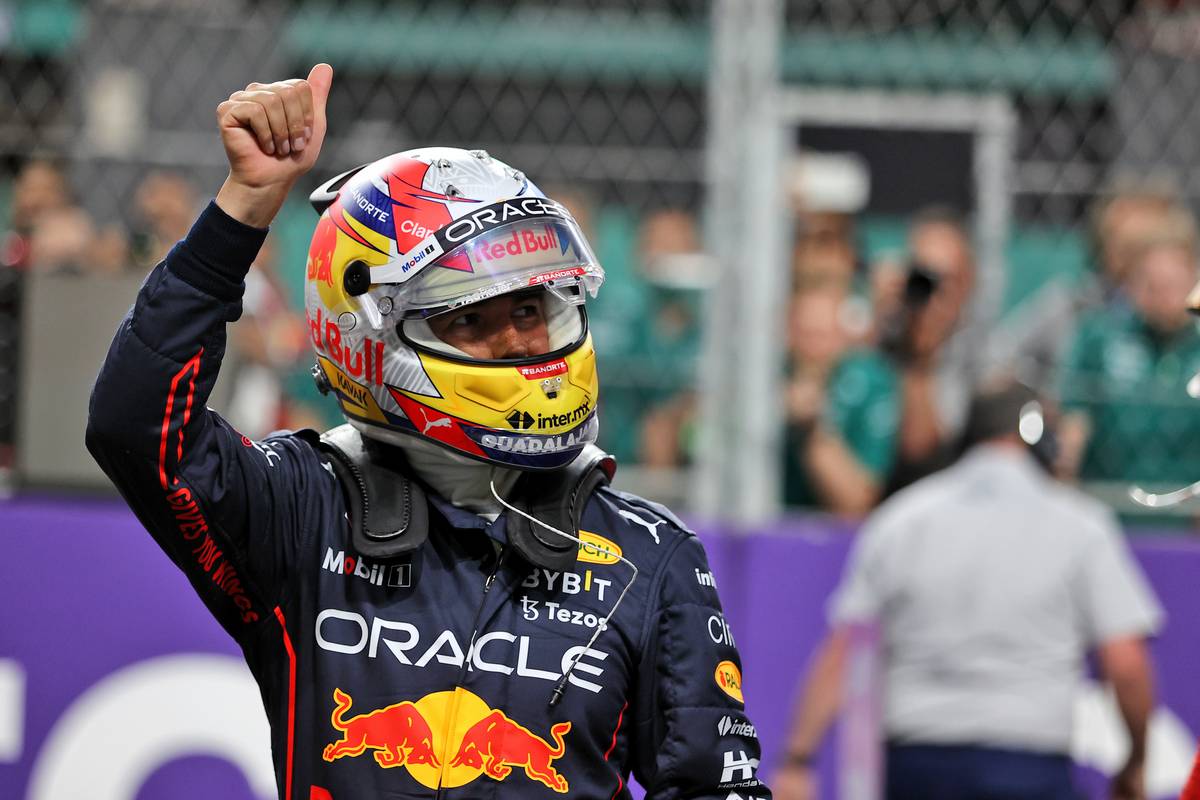 Q3: Perez soars to maiden pole ahead of Leclerc and Sainz

Verstappen was first out on track followed by Leclerc, Gasly and Sainz, with Perez opting to hold back momentarily and Russell saving himself for a single run toward the end. Verstappen went for his now-characteristic two-lap warm-up leaving the two Ferrari drivers to lay down the gauntlet, Sainz continuing to hold the upper hand with a time of 1:28.402s putting him a slender 0.044s quicker than Leclerc.

Perez picked up third ahead of the Alpines of Ocon and Alonso, but it was an unusually sluggish effort from Verstappen who was only sixth ahead of Gasly, Bottas and Magnussen when he finally completed his run complaining of "zero grip on this tyre". Russell then had the track more or less to himself as he embarked on his run, which saw him split the Alpines in fifth.

By then the two Ferrari drivers were already back out for their last attack runs, with Verstappen completing a quick turnaround and hot on their heels. Leclerc was pushing right to the limit and finally bested his team mate with a time of 1:28.225s, but even this wasn't good enough to stay ahead of a surging Sergio Perez who clinched his first-ever pole with a phenomenal time of 1:28.200s that Verstappen wasn't able to match, the reigning world champion having to settle for fourth instead.