Red Bull's Max Verstappen bounced back from his heartbreaking retirement in last week's season opener to take victory this time round in the Saudi Arabian Grand Prix, at the culmination of a hard-fought battle with Ferrari's Charles Leclerc.

Leclerc had earlier taken the lead when Ferrari bluffed pole sitter Sergio Perez into making an early pit stop, and then gained a further advantage when a safety car was scrambled for an accident involving Williams' Nicholas Latifi.

Carlos Sainz joined Verstappen and Leclerc on the podium, with Mercedes' George Russell fifth. A tough race for his team mate Lewis Hamilton saw the former world champion forced to settle for a single point in tenth.

The desert might have been lost in the impenetrable darkness of night, but there was no problem spotting Jeddah Corniche Circuit from any distance, the ribbon of track picked out in vivid high definition intensity by the glare of the spotlights as the cars assembled on the grid for the start of the race. There were just 18 cars this week: Mick Schumacher's Haas had been withdrawn overnight following his huge crash in qualifying, although the driver himself was looking a picture of health as he watched on from pit lane; and Yuki Tsunoda's AlphaTauri had suffered more reliability issues on the way out of pit lane and failed to make it to the grid. 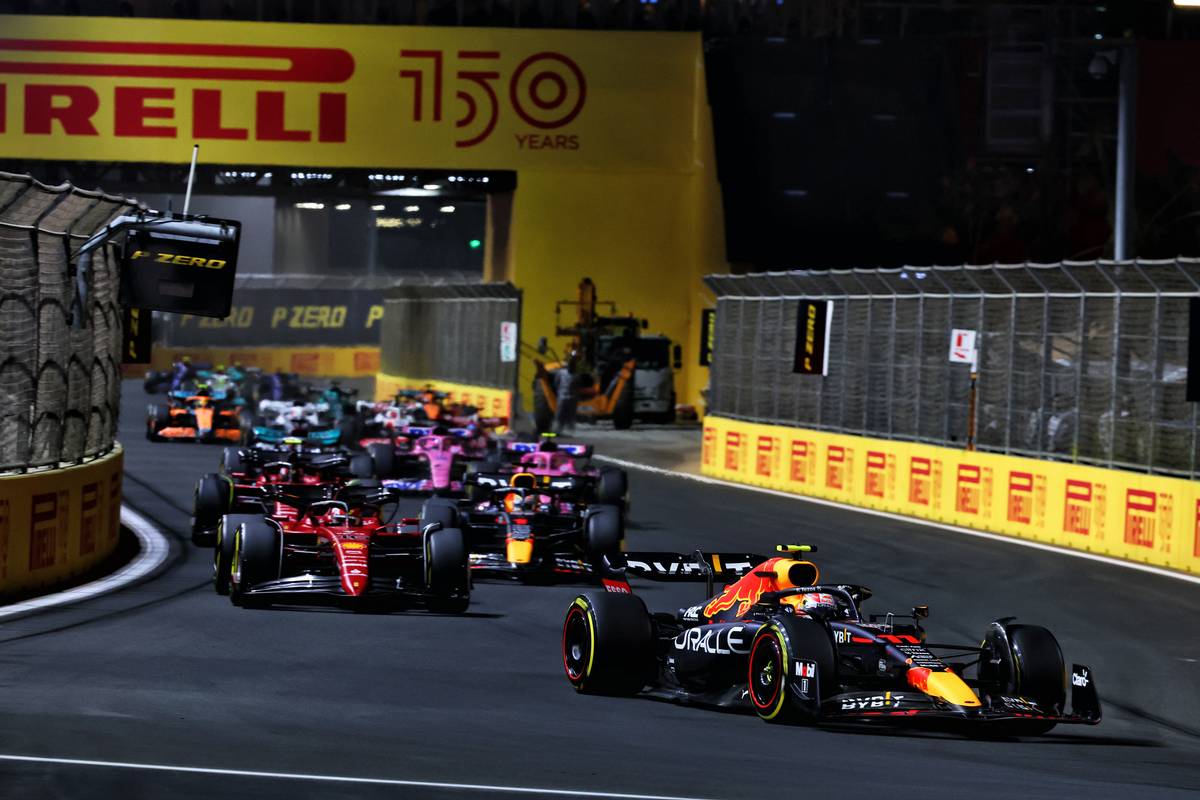 Red Bull's Sergio Perez and Ferrari's Charles Leclerc took up their places at the front. Meanwhile Carlos Sainz was in position in third place alongside Max Verstappen despite some frantic last minute repairs on the F1-75's electrical wiring loom by the Ferrari mechanics. The leaders were all on the medium tyres; a long way further back, Lewis Hamilton was one of just three drivers to have opted for the hard compound as he lined up in a forlorn 15th after a nightmare time on Saturday. He'd already made up one place before the start thanks to Schumacher's withdrawal and duly started behind McLaren's Daniel Ricciardo, who had been handed a three place penalty for impeding Esteban Ocon in qualifying.

But all that was past was prologue, and now all that mattered was what would happen in the next two hours. Perez was able to hold the lead over Leclerc into turn 1, but Sainz couldn't fend off Verstappen who succeeded in taking third. Ocon was initially able to consolidate fifth, but four laps into the race he was dispatched by Mercedes' George Russell diving into the final corner. The rest of the top ten consisted of Fernando Alonso, Valtteri Bottas, Kevin Magnussen and Pierre Gasly, the French driver having his hands full with McLaren's Lando Norris. The big loser at the start was Guanyu Zhou whose Alfa Romeo went into anti-stall dropping him to last place from where he soon commenced his recovery drive with early passes on Nicholas Latifi, Alex Albon and Nico Hulkenberg.

With seven laps complete, Perez had moved out of DRS range of Leclerc, and the top four had pulled almost ten seconds clear of Russell. The big battle on the track was between Alpine team mates Alonso and Ocon who were scrapping furiously (and without intervention from the pit wall) over sixth, with Bottas running close behind the pair in the Alfa waiting for any opportunity to strike. Further back, Ricciardo was the first driver to make a scheduled pit stop on lap 9 and to change to the hard tyres, which helped Hamilton up to 12th from where was able to make quick work of Norris and get within touching distance of the top ten and much-needed championship points. 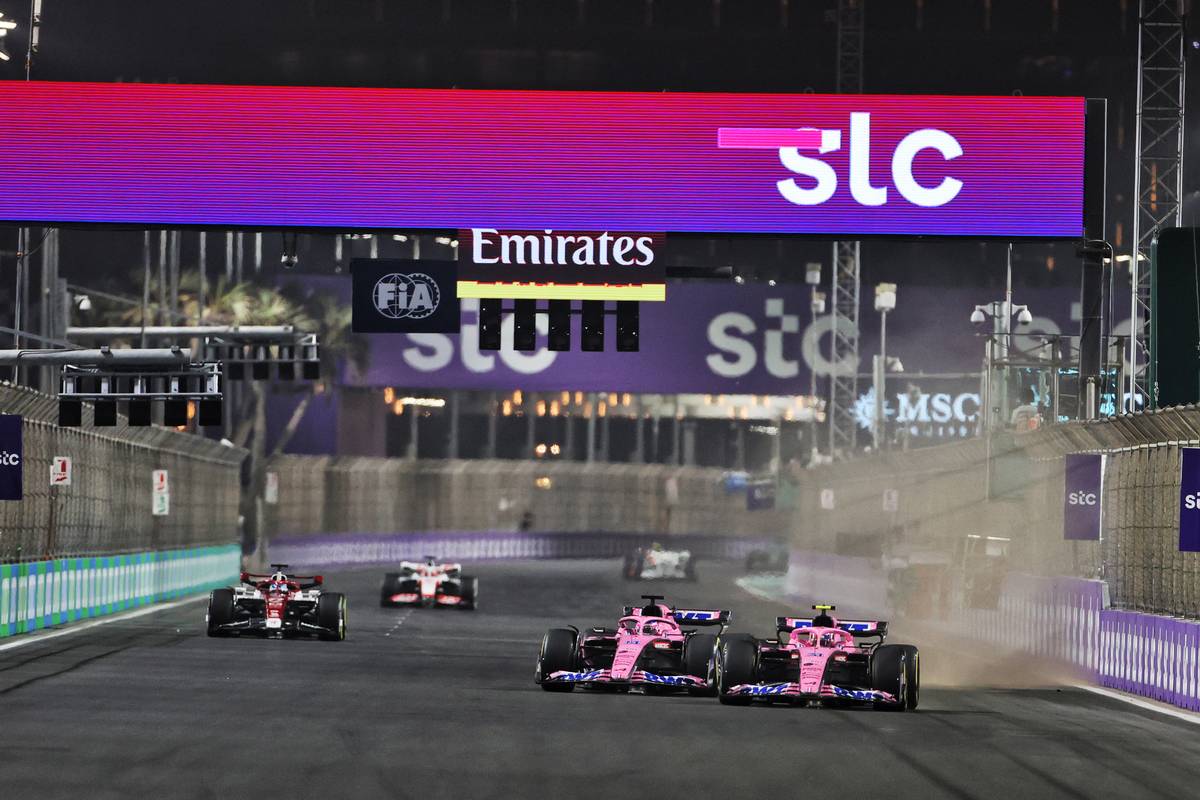 After some white-knuckle moments between its drivers, Alpine finally got on the radio to instruct Ocon to hold position behind Alonso. That took the fire out of the spat but left Ocon vulnerable to Bottas using the opportunity to close up and pass him on lap 15.

More backmarkers had cycled through pit lane by now but the first of the leaders to come in was Perez reacting to Ferrari's instruction to Leclerc to "box to overtake" which proved to be a bluff and he stayed out while Perez dropped out of the lead. Even as the teams digested this, a safety car was deployed after Nicholas Latifi thumped his Williams nose-first into the wall at the final corner after getting on the power too early and losing the rear end. That gave Leclerc and Verstappen the chance for a 'free' pit stop under the caution leaving Perez in third ahead of Sainz and Russell. Having started on the hard tyres and with no need to make a stop this early, Magnussen and Hamilton were next followed by Alonso, while Hulkenberg (also yet to stop) and Bottas rounded out the top ten when racing resumed on lap 21.

Leclerc managed to dive into turn 1 first despite Verstappen working the slipstream for all it was worth. Behind them, Sainz took third after race control decreed that Perez give up the position as it was judged that the Ferrari had been just in front when the safety car was scrambled. That put the Mexican in the crosshairs of Russell, but the Mercedes didn't have the pace to do anything with the gift-wrapped offer - just as Hamilton was similarly struggling to pass Magnussen. 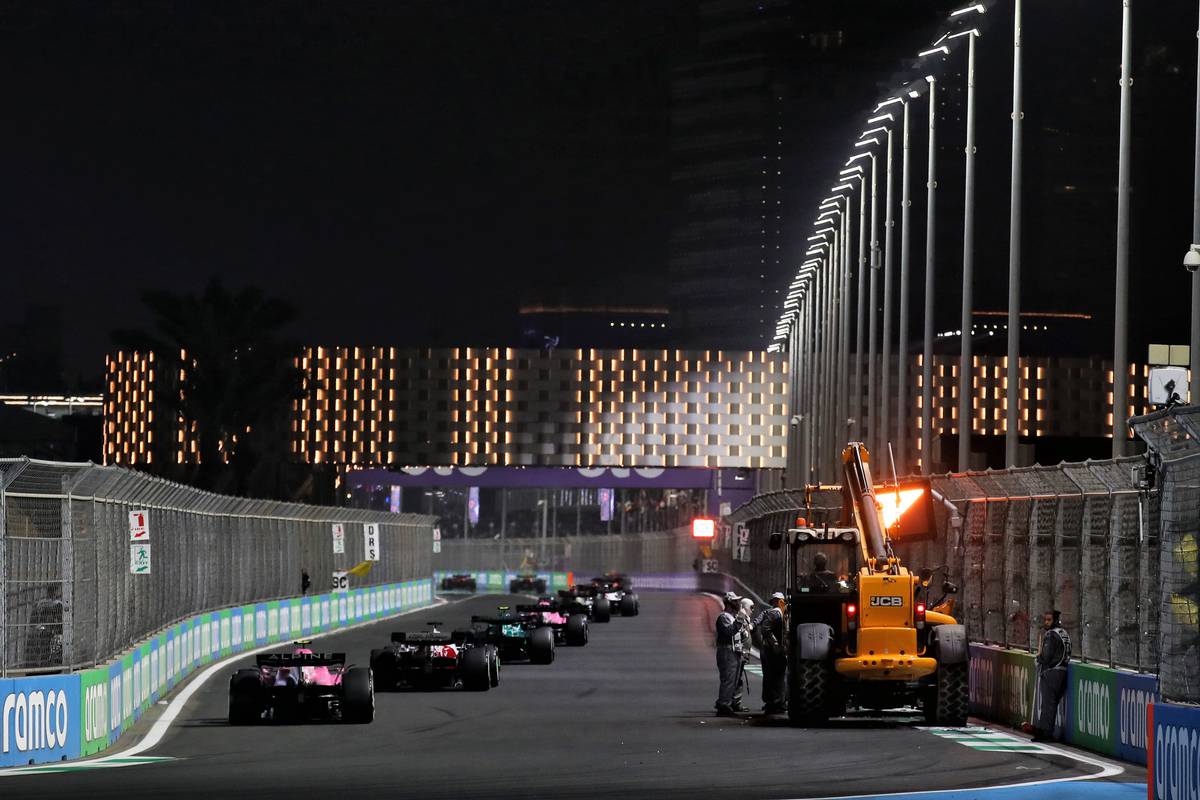 Verstappen punched in some fastest laps to cut the distance to Leclerc, but the Ferrari responded in kind and the top two started to pull away from Sainz and Perez, with Russell and Hamilton working together in fifth and sixth to get the maximum mutual DRS advantage. Hamilton reported there were no wear issues on the hard tyres, and the plan was clearly to run as long as possible before switching compounds in the hope that another safety car might materialise. However a pass for seventh by Alonso on Magnussen on lap 35 suggested that the hard tyres might also be reaching the end of their effective life.

In fact it was the Alpine rather than the tyres that expired first. The car suddenly lost power on lap 36 leaving it crawling back to pit lane, albeit without immediately triggering the safety car that those yet to make their stops so badly needed. Moments later there was a second roll of the dice with Ricciardo likewise losing power and coming to a halt close to pit lane entry, with Valtteri Bottas also choosing this moment to expire on pit lane. Confusion about the timing of a Virtual Safety Car and the closing of pit lane entry to remove the stricken MCL36 meant Hamilton was too late to take advantage of the VSC and make his stop, while Magnussen and Hulkenberg had been more fortunate.

Hamilton finally came in as soon as pit lane was reopened, but by now the VSC was ending and without that assistance he dropped out of the top ten. Leclerc had continued to hold the lead with two seconds over Verstappen, but as racing resumed the Red Bull stormed the restart and threw everything he had into his attack. Leclerc was able to withstand the initial pressure, but Verstappen struck again at the end of lap 43 and succeeded in taking the position - only for Leclerc to counterstrike with DRS down the straight and snatch it straight back, just as he had done repeatedly in Bahrain a week ago. There was a replay of the battle one lap later and this time both cars virtually came to a halt in turn 1, Verstappen with a big lock up allowing Leclerc to scramble away to relative safety. 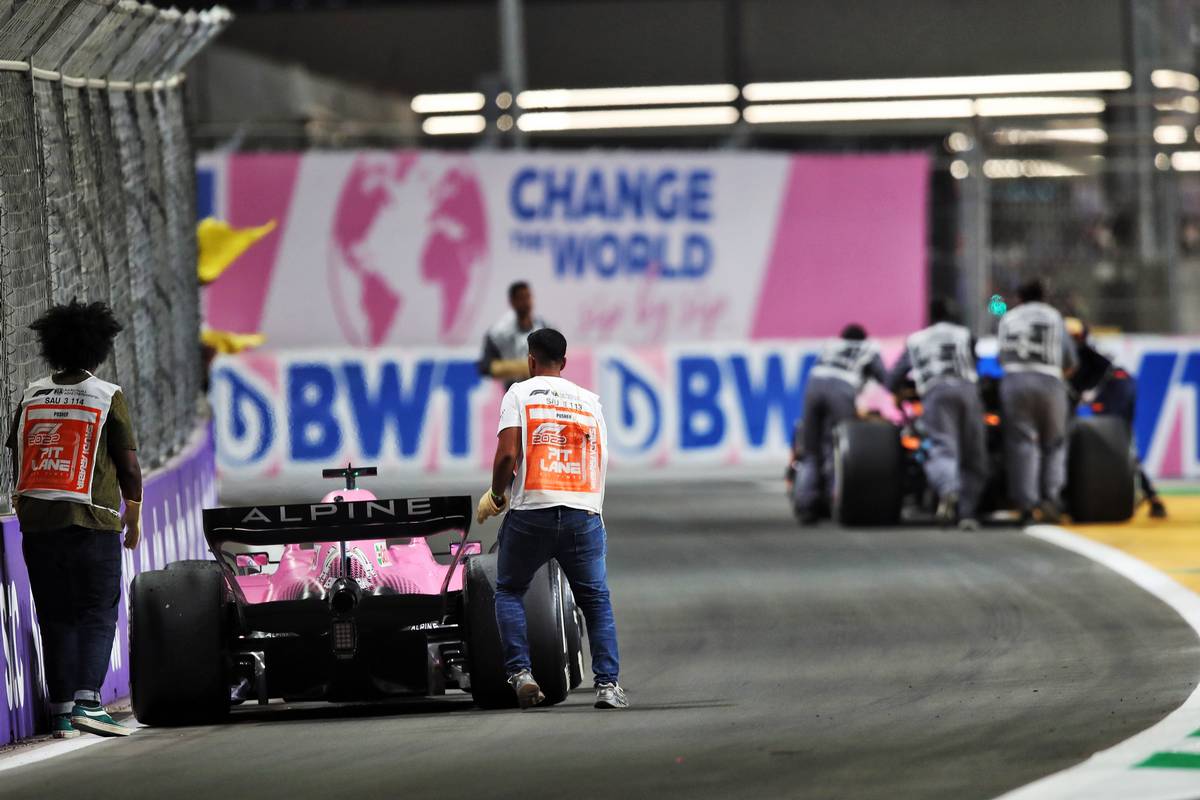 Just when it looked like Leclerc had survived, a small mistake by the Ferrari at the end of lap 45 allowed Verstappen back into DRS range and battle was resumed. Leclerc got out of shape heading into the final corner and that was all Verstappen needed to finally pull off the pass and keep the position. Verstappen was faster on the next lap leaving Leclerc too far behind to launch an attack of his own. Next time round the briefest of yellow flags for a collision between Alex Albon and Lance Stroll at turn 1 meant that DRS was disabled, thwarting Leclerc's hopes of attacking for another lap. He was running out of time.

Verstappen was still ahead going into the last lap, and it came to a drag race to the line out of the final corner. Verstappen's margin was just enough to see him take the win by the narrowest of margins, with Sainz joining them on the podium ahead of Perez and Russell.

Ocon finished in sixth with a desperate final lunge to the line ahead of Norris followed by Gasly and Norris, while Hamilton picked up a consolation point in tenth. Zhou finished in 11th after a mix-up during his first stop meant he had failed to serve a five second penalty for going off track while overtaking Albon during the opening laps, and got a replacement drive-through penalty instead. Hulkenberg and Stroll were the last of the 13 finishers, with Albon among the six retirees.