Charles Leclerc became the first non-Mercedes driver to claim pole position for the Australian Grand Prix since 2013, with the Ferrari's 1:17.868s putting him three tenths ahead of Red Bull duo Max Verstappen and Sergio Perez.

Lando Norris confirmed McLaren's improved form this weekend with fourth on the grid, followed by Mercedes pair Lewis Hamilton and George Russell. However it was a disappointing finish for Carlos Sainz who will have to start from ninth.

Aston Martin's torrid weekend continued with Lance Stroll involved in an accident with Williams' Nicholas Latifi that brought out a red flag and put both cars out in Q1. There was also a heavy crash for Fernando Alonso in Q3 after the Alpine suffered an apparent hydraulic issue while on a flying lap.

It had been a lively start to the day in final practice, with McLaren's Lando Norris unexpectedly taking the top spot ahead of Ferrari's Charles Leclerc in a session interrupted for two red flags, both for Aston Martins hitting the wall. That had left the team scrambling over the lunch break to make repairs in time to get Sebastian Vettel and Lance Stroll out in time for the start of Q1.

Elsewhere it continued to be a tough weekend for both Mercedes drivers, and even Max Verstappen had looked less than happy in the Red Bull this weekend at Albert Park circuit. Some of that may have been the result of drivers adapting to the withdrawal of one of the four DRS activation zones on safety grounds at short notice. It all promised a fascinating and unpredictable qualifying under the mainly clear blue skies and warm sunshine of a late summer afternoon in Melbourne. 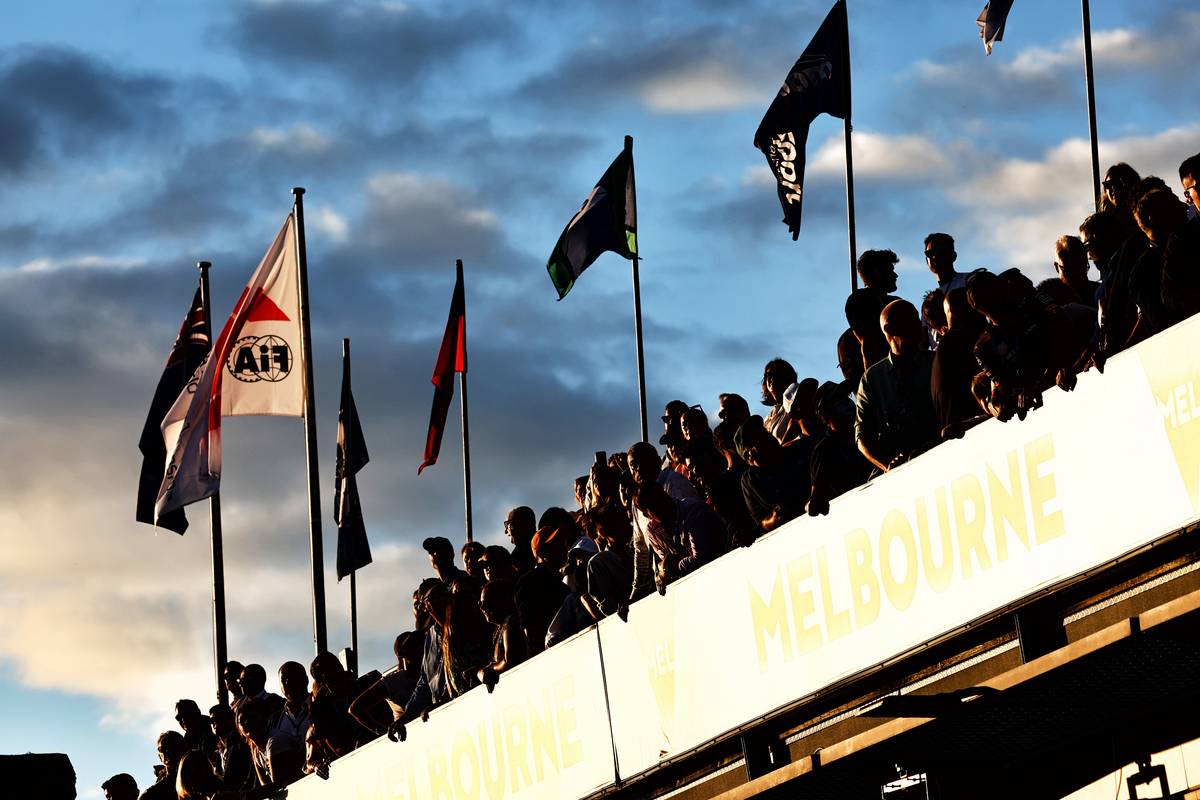 The two Haas cars of Kevin Magnussen and Mick Schumacher were quick to head out on the soft compound tyres when the lights went green. They were accompanied by Alex Albon in the Williams, who is already assured of a three place grid penalty hanging over him for colliding with Stroll at the end of the Saudi Arabian GP. They weren't on their own for long, and soon the track was filling up with traffic with drivers eager to get their first laps on the board.

Schumacher was best of the first three with a time of 1:21.125s, but that was swiftly smashed by Leclerc's 1:19.391s. The time was over a second clear of AlphaTauri's Yuki Tsunoda and Alpine's Guanyu Zhou before Norris affirmed his FP3 by slipping into second albeit four tenths off the Ferrari. Leclerc was then displaced by his team mate Carlos Sainz, while Verstappen overcame traffic issues to make his bow in third. He was soon demoted to fourth as his team mate Sergio Perez went a tenth better to split the Ferraris at the top.

Leclerc was quick to respond and went back to the top with a time of 1:18.881s, already faster than the last time F1 conducted qualifying in Melbourne in the days before COVID, while Verstappen finally enjoyed a clear run to go second by 0.044s from the Monegasque. Also out on track was Lewis Hamilton, and while he achieved a purple first sector the Mercedes continues to look a handful as his final time was only good enough for 11th behind team mate George Russell, both drivers still over a second slower than the frontrunners.

Verstappen and Perez put in new runs that propelled them to first and second ahead of Leclerc and Sainz, followed by Alpine's Fernando Alonso and Alfa Romeo's Valtteri Bottas. Norris was now in seventh ahead of improved times from Hamilton and Russell, with Esteban Ocon rounding out the top ten. At risk of elimination were Williams pair Albon and Nicholas Latifi together with Magnussen, as Stroll finally emerged from the garage and headed out in his repaired AMR22 to attempt to set a lap time, even as frantic engineers continued to work on Vettel's car in the garage. 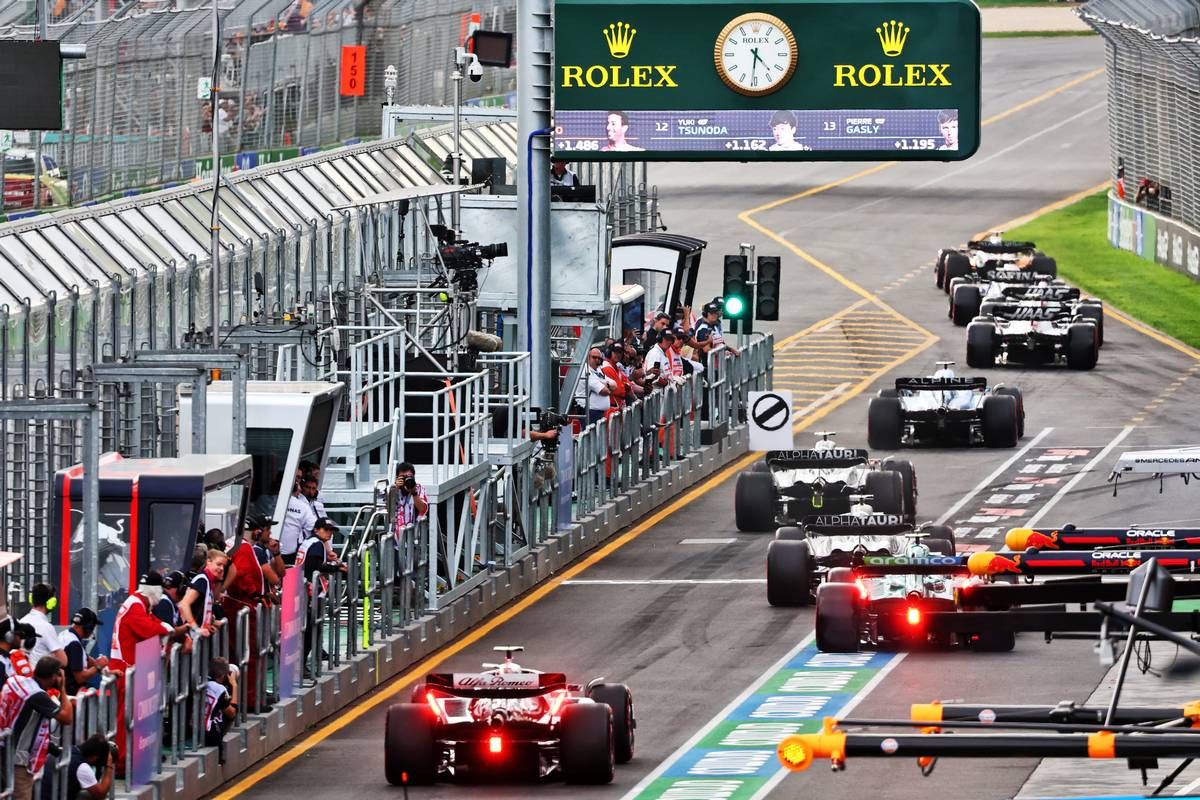 However, with two minutes remaining on the clock, the red flags were being waved for a huge impact into the wall for Latifi. The Williams' rear wheel had been clipped by Stroll going through the turn 6 complex sending him spinning off. Both drivers were quick to get on their respective team radios to blame the other for the collision, which seemed like a case of mutual misunderstanding that will be reviewed by the stewards after the end of the session.

"I just tried to go back past to prepare my out-lap and he just turned into me," Latifi said. "I saw he aborted his lap and I wanted to get on with my own preparation lap. It's clear on the video, so not much more to say." There was extensive damage to the Williams that took some time for the track workers to clear up, while Stroll's front suspension had also been broken by the impact. The silver lining was that it gave the Aston pit crew valuable extra minutes to work on Vettel's car.

With only two minutes remaining it was going to be a close call as to whether the cars could get out and around the 5.303km circuit while finding clear track in time to cross the start line before the chequered flag came out. There was certainly no time for a leisurely double warm-up lap to get the tyres up to temperature by the time they needed to get up to speed. Feeling secure in their positions, the top seven decided to opt out of the melee and remained in the pits, which helped reduce the congestion somewhat.

Unsurprisingly in these circumstances, there were no surprises when the dust settled. Schumacher had been on the bubble but made it through to Q2 when Albon and Magnussen missed the cut. Vettel had indeed been able to get out and set a time, but it was only good enough for 18th meaning he was also left on the sidelines together with the crumpled Latifi and Stroll. 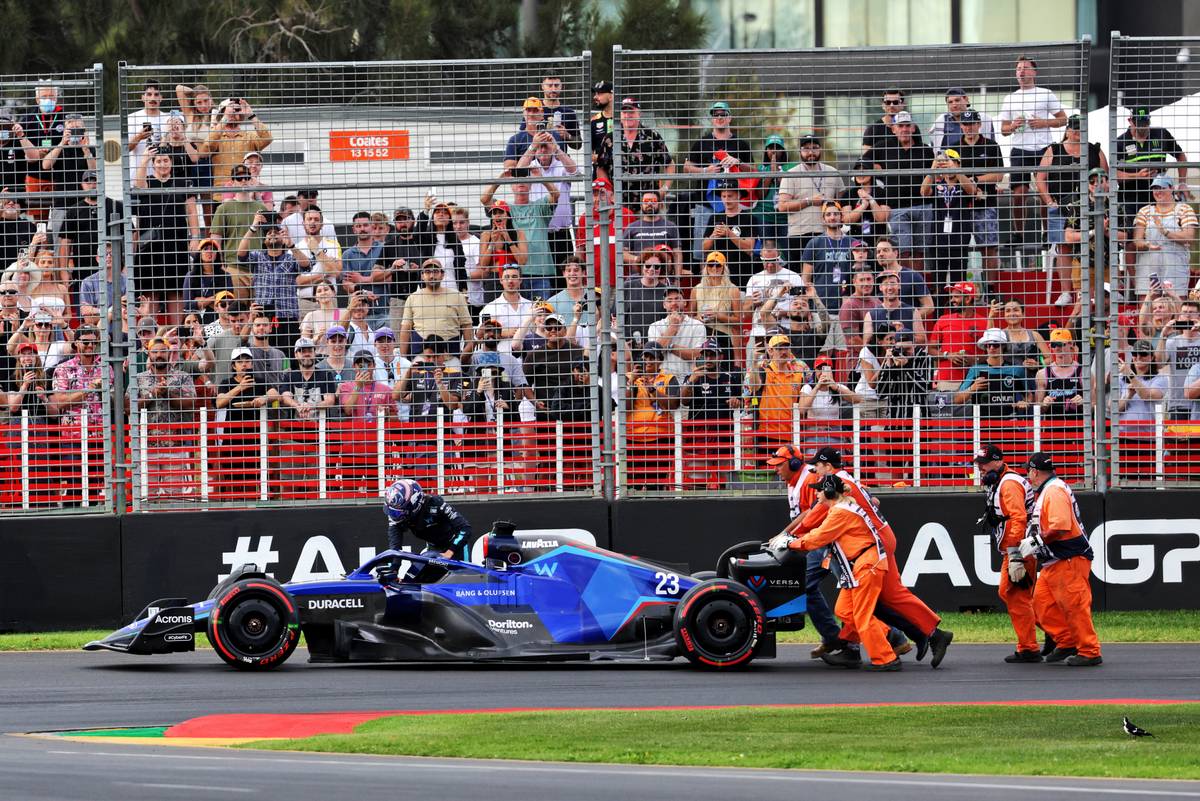 There was a slight delay to the start of the second round as marshals had to remove Albon's car from the race track after it had come to a premature stop at the end of Q1. Verstappen was first to head out when the session finally resumed, followed by Hamilton, Russell and Schumacher, and the AlphaTauris of Tsunoda and Pierre Gasly also wasted little time getting down to business. Even though just 15 cars remained in the running, the track was soon looking very busy again leading to the usual frustrations for the drivers with slower cars getting in the way on their flying laps.

Verstappen opened the bidding with a time of 1:18.611s, with Perez in second ahead of Leclerc and Sainz. The partisan crown then roared their approval of local hero Daniel Ricciardo taking temporary possession of fourth but he was quickly displaced by Norris, and then by Alonso slotting into second between the two Red Bulls. Meanwhile Hamilton's day was showing no signs of improvement as he was only fast enough for eighth ahead of Gasly and Ocon despite investing in two warm-up laps to wake up the sleepy soft tyres.

Perez took over the top spot from Verstappen with a time of 1:18.340s, but did so while yellow flags were out at turn 11 for Russell briefly running off, meaning he would have to visit the stewards after the session. Once he was back up to speed, Russell moved up to sixth ahead of Ricciardo, backing Hamilton down to ninth place in the process which was getting dangerously close to the cut line.

The final minutes saw both Ferraris improve with Sainz and Leclerc splitting the Red Bulls in second and third. Verstappen was complaining of a lack of rear grip at low speed, but he was still fourth ahead of Alonso, Norris and Russell. Hamilton did better with his final run and moved up to eighth to secure his progression to the final top ten pole shoot-out along with Ricciardo and Ocon. Missing out were Gasly, Bottas, Tsunoda, Zhou and Schumacher. It meant that five teams - Red Bull, Ferrari, Alpine, McLaren and Mercedes - had got both of their drivers through to the final round.

Q3: Leclerc beats Verstappen and Perez to pole after big accident for Alonso

With the sun now low in the sky, the drivers were finding it hard to see. Leclerc, Hamilton and Verstappen were among those to make an urgent request for a new helmet with the darkest-possible visor tint available before they headed back out again for the final 12-minute round.

Verstappen was first out again, exiting pit lane pursued by a brace of Ferraris. A big lock-up on his lap limited him to 1:18.399s, but even so Perez was only one thousandth faster when he completed his own first push lap. While the two Ferraris completed a second warm-up lap, it left the crown cheering on Ricciardo who took up temporary residence in third.

Leclerc had just gone top by 0.159s ahead of the Red Bulls when the red flags were out once more, this time triggered by heavy crash for Alonso who had run into the gravel at turn 11, and from there direct to the barrier. Replays suggested that the car had been stuck in fourth gear, and a hydraulic issue was suspected on the A522 that has been proving fast but worryingly unreliable so far this season. It was a frustrating end to qualifying for Alonso who had been looking strong all weekend up to now, and had even just set the quickest time in the middle sector.

There were seven minutes remaining when the session resumed, with the pressure on Sainz who had been just metres away from crossing the line and setting a time when the session had been halted. Russell was in a similar situation also having been unable to set a representative lap time before the stoppage, while Hamilton's single completed Q3 run to date had left the seven-time world champion just seventh quickest and a second off provisional pole. The two Mercedes were quick to head out when the session resumed, running closely together suggesting that they were considering some sort of aerodynamic tow, but with the W13 needing two warm-up laps there was too time left to pull off any such Hail Mary antics. 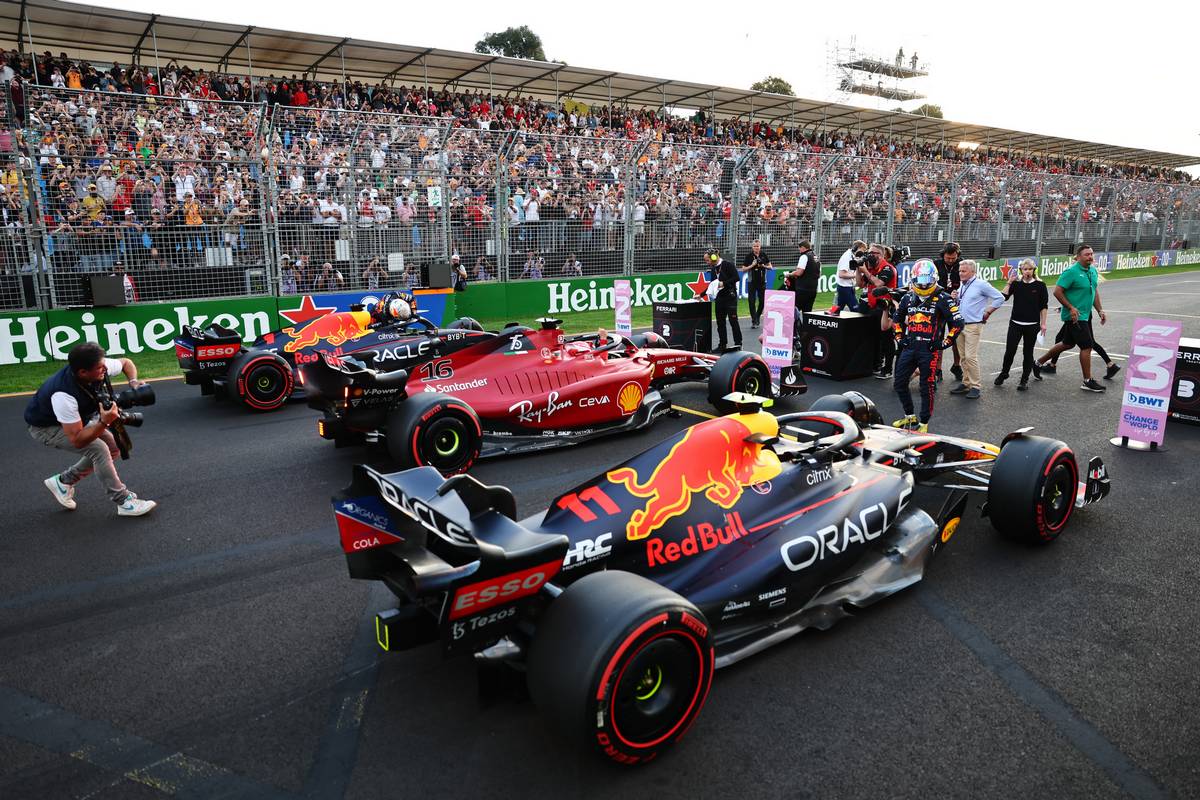 On his run, Perez improved his time but was still a thousandth off Leclerc's earlier effort. Russell finally put a time in the Q3 books and secured for himself a commendable fourth place between Verstappen and Ricciardo. Verstappen then found sufficient extra speed to depose Leclerc from the top by 0.085s, but the Ferrari immediately regained pole by almost three tenths.

With Perez unable to do better than third, there were also strong final laps from Norris and Hamilton to move up to fourth and fifth followed by Russell, Ricciardo and Ocon. The big surprise was Sainz whose final run went awry leaving him in ninth place.