Lando Norris will line up in third despite running off in the final seconds, with Kevin Magnussen securing a second row start for Haas ahead of Fernando Alonso and Daniel Ricciardo.

Neither Lewis Hamilton nor George Russell made it through to the final round of qualifying, after Q2 was paused following an accident for Ferrari's Carlos Sainz and rain then started to fall again before the resumption.

There had already been an earlier red flag in Q1 after Alex Albon's Williams suffered a right rear brake failure and left debris on the track, while Esteban Ocon had also been left on the sidelines due to a gearbox issue on the Alpine.

Imola had finally shaken off a full morning of heavy rain, but the track at the Autodromo Enzo e Dino Ferrari was far from bone dry as the teams prepared for the start of Friday afternoon qualifying. With the risk of further rain during the hour put at a significant 40 per cent, who would get their strategy right this afternoon and claim pole position for tomorrow's sprint race? 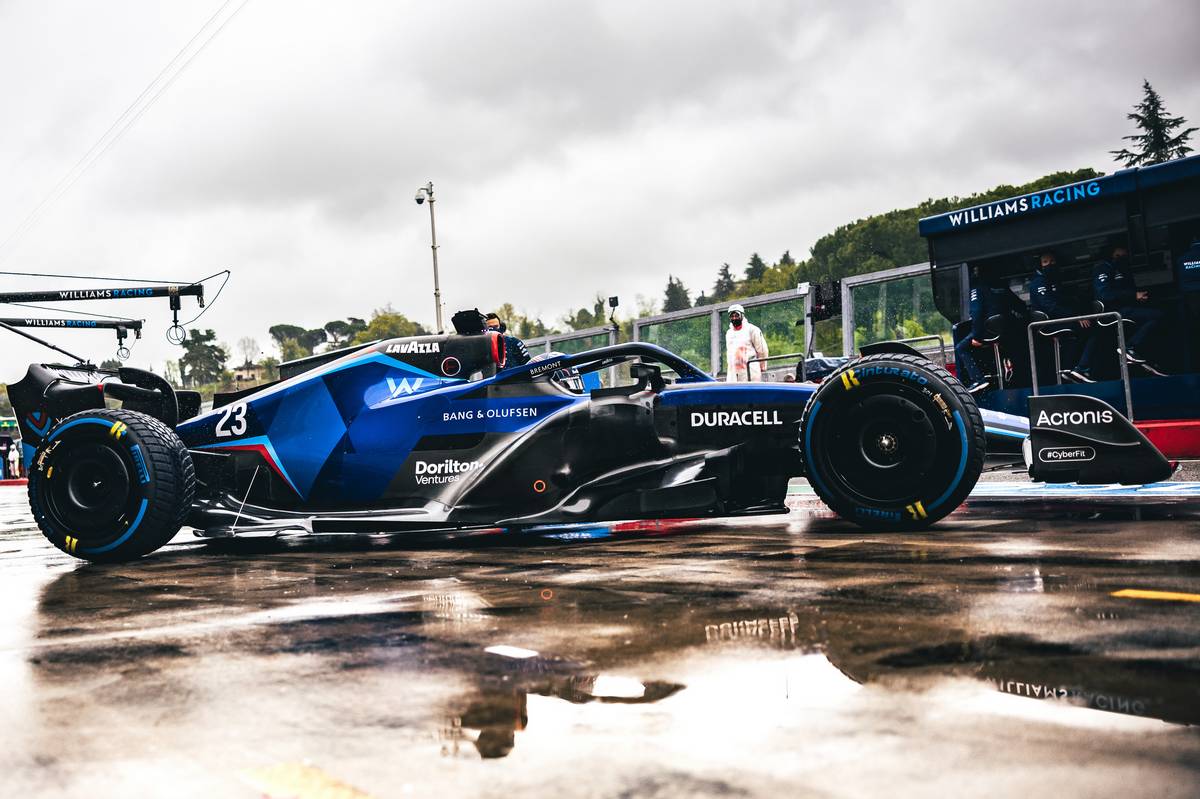 Q1: Leclerc and Verstappen lead the way as Mercedes struggle to make the cut

Alfa Romeo pair Valtteri Bottas and Guanyu Zhou were first to head out on a set of slick tyres, while most of those around them initially stuck to the safety of the intermediates. Lewis Hamilton quickly confirmed to the Mercedes pit wall that a dry line was already emerging, and sure enough the early honours went to Lance Stroll with a time of 1:23.419s having also elected to start on the slicks. The Aston Martin's time was a second quicker than Bottas had managed on this first run, and already a full six seconds swifter than Charles Leclerc's session-topping time in the fully wet first free practice.

The session was then interrupted by a red flag after a brake fire on the right rear wheel of Alex Albon's Williams quickly destroyed the tyre and scattered rubber and carbon fibre across the track as he attempted to limp back to pit lane. The clean-up was quick and efficient, and there was still 12 minutes on the clock when the session resumed with everyone having now taken the opportunity to switch onto the soft tyres. Alpine's Esteban Ocon was at the head of the queue to get back to work followed by Sebastian Vettel, Zhou and then Nicholas Latifi in the sole remaining Williams. 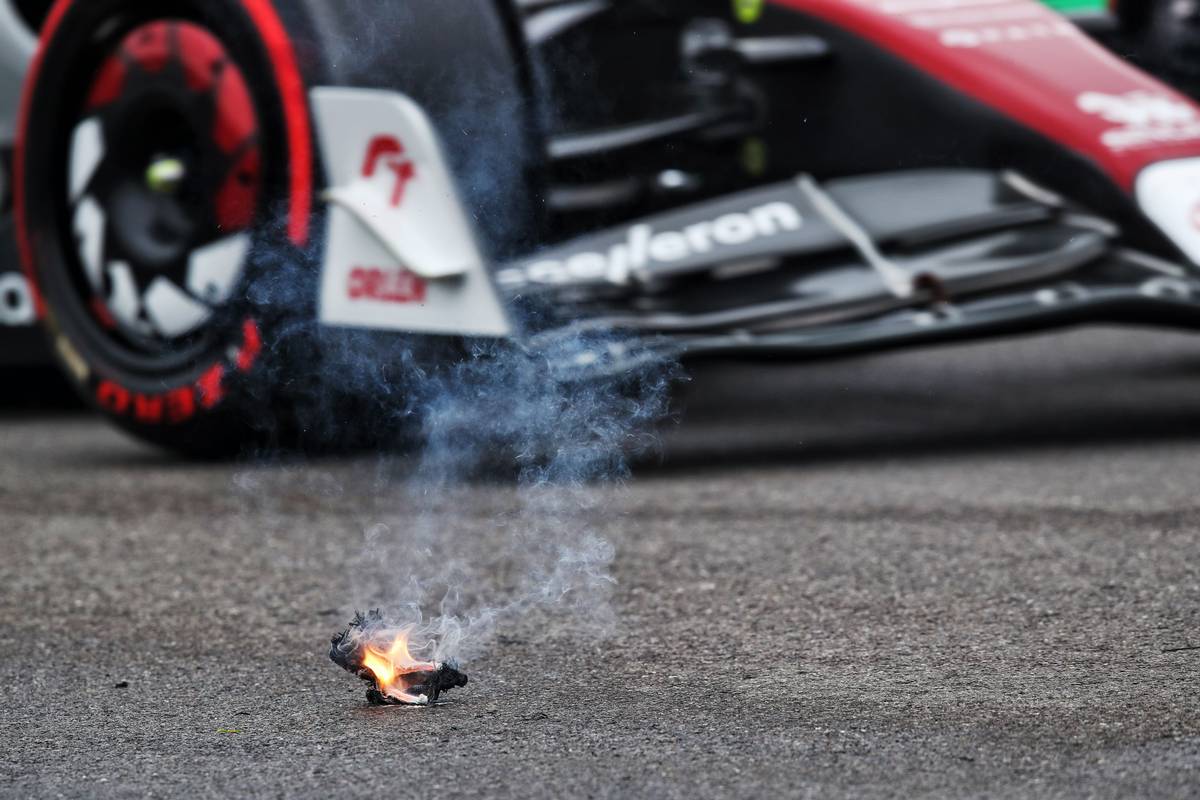 The improving track conditions meant that Stroll's time at the top didn't last long, with Vettel ousting his team mate with a time of 1:23.095s which was 0.145 quicker than Ocon's effort. Bottas, Stroll and then Fernando Alonso took turns to go quicker still, with the Alpine's time of 1:21.363s proving quicker than Max Verstappen could manage in the Red Bull.

Lando Norris soon found the extra speed necessary to briefly go top before the Ferraris of Carlos Sainz and Charles Leclerc resumed control, Sainz moving the goalposts to 1:20.319s which was enough to thwart Verstappen on his next push lap by three hundredths of a second. Hamilton also completed a flying lap but was only good enough for seventh, which was then pipped by his team mate George Russell. Both were soon pushed out of the top ten by improvements from McLaren pair Lando Norris and Daniel Ricciardo among others, before Leclerc reclaimed his grip on the top spot with a lap of 1:18.796s, half a second ahead of Verstappen and Sainz with Zhou ending up an impressive fourth ahead of Sergio Perez.

As the clock counted down, there was a mad scramble by the drivers to put in one final push to ensure they made Q2. Both Stroll and Vettel were at risk of falling short but their final laps promoted them into P10 and P11 respectively, and it was Hamilton who was left on the bubble and surviving the cut by just 0.004s after the W13 visibly suffered from major porpoising. Russell also made it through having made a late stop for fresher tyres, but it was a painful display by the reigning constructors champions.

Instead it was the two AlphaTauris of Yuki Tsunoda and Pierre Gasly who found themselves on the wrong side of the line, along with Latifi and Ocon after the latter was left becalmed in the pits with a gearbox issue. Albon was also out, having failed to set a time after the earlier brake fire ruled him out of further running. 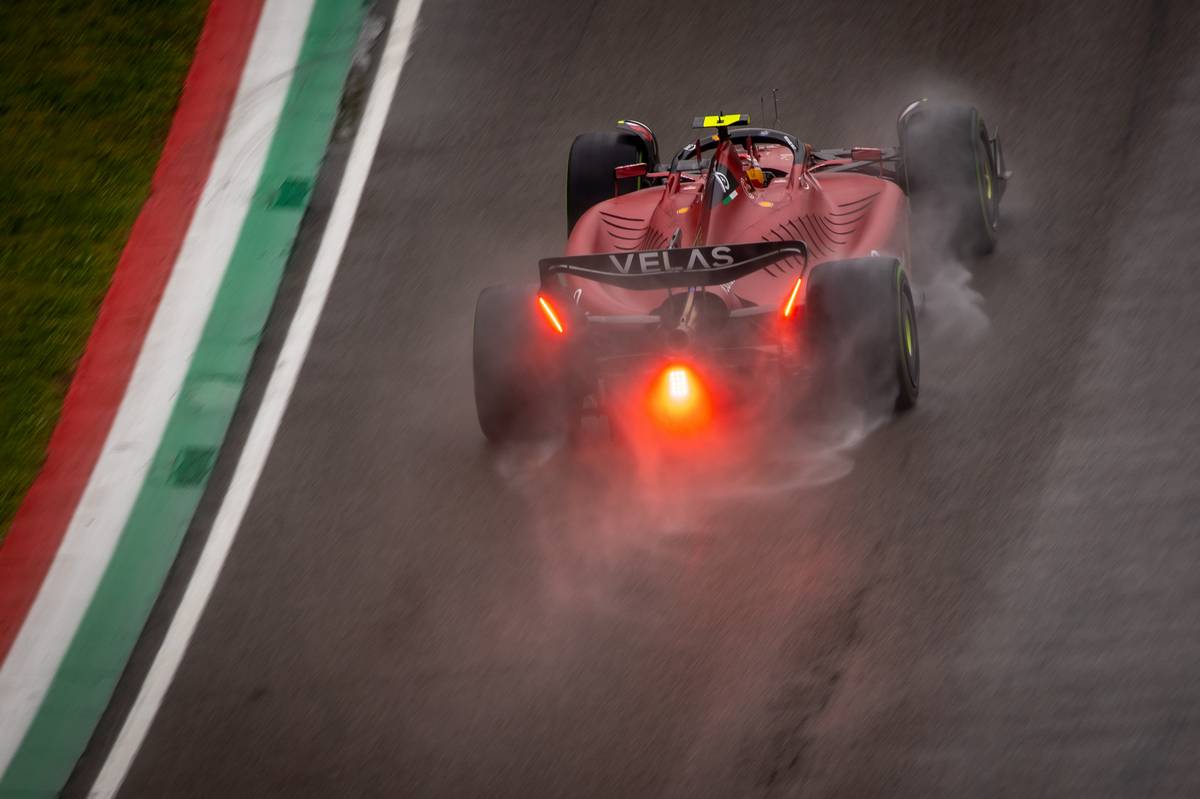 With the local weather radar predicting rain at any moment, there was no time to waste as Sainz led the cars back out. The rush to get out meant that an anxious Hamilton even ran over his tyre blanket as he exited his pit box. Verstappen soon went top with a time of 1:18.793s, two tenths quicker than Sainz who was followed by Norris, Perez and Leclerc with neither Mercedes making it into the top ten on this run.

Before anyone could go again, there was another red flag and this time it was for Sainz after he took too much kerb heading into the second Variante Alta, causing the back end of the Ferrari to let go and send him flying into the barriers. Sainz was unhurt and soon on his way back to pit lane, but the F1-75 was looking worse for wear with concerns about damage to the gearbox, as well as the front left suspension ensuring he would play no further part in qualifying.

"I wasn't even pushing that hard," he told the media once he got back to the paddock. "I just needed to put a banker in to react to the rain that was coming. It wasn't on the limit, and unfortunately I lost the car. Tricky conditions for sure ... maybe it was starting to rain, maybe the tyres were too hot."

Meanwhile the predicted rain was indeed starting to fall, meaning that those currently in the drop zone - Russell, Hamilton, Zhou, Stroll and Haas' Mick Schumacher - were now very much at a disadvantage. With the track getting wetter and demanding a move to intermediates, a number of cars including Vettel, Leclerc, Norris, Perez, Alonso and Bottas came out to sample the conditions they would face in Q3 but a big wobble from Norris showed just how much the conditions had already deteriorated by this point.

With nothing to gain, none of the doomed quintet at the bottom came out again, meaning it was the first time since 2012 that Mercedes had failed to get either of their cars through to the final round of qualifying. Russell will start from P11 alongside Schumacher, with Hamilton consigned to P13 alongside Zhou and ahead of Stroll. 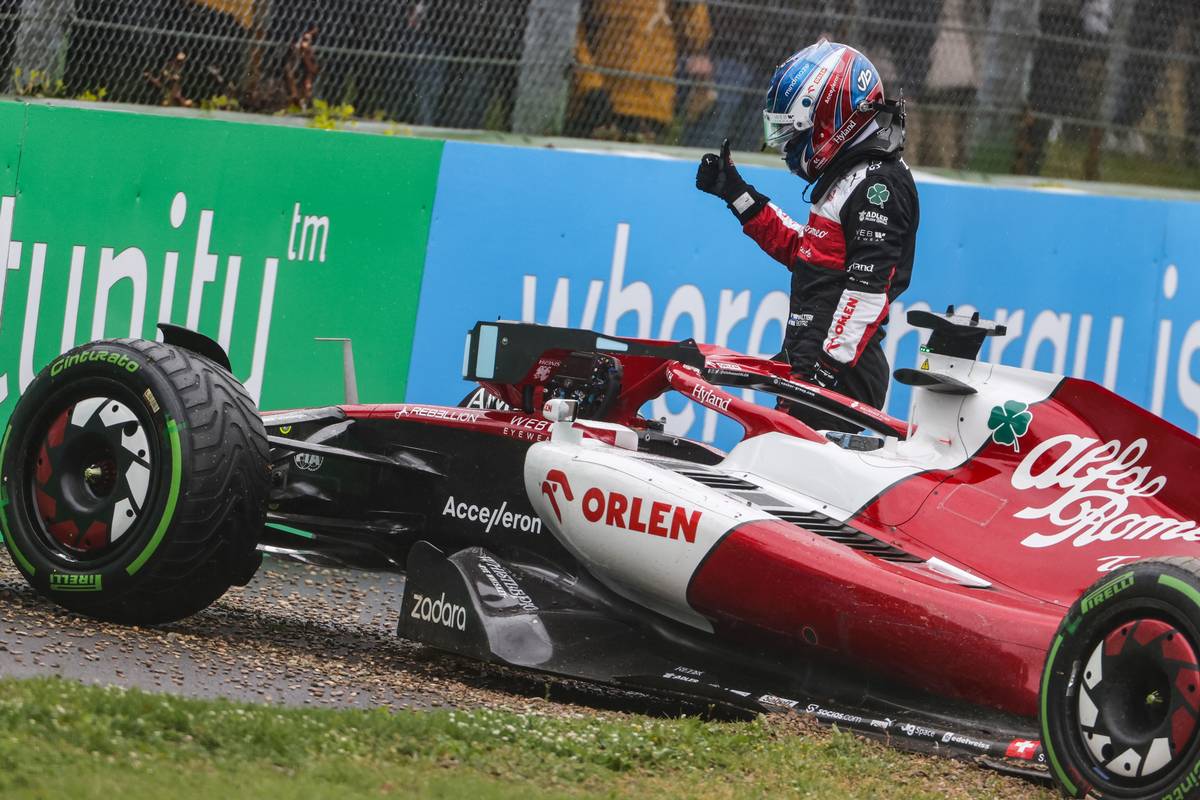 By the time the final top ten pole shoot-out round got underway the track was wet in places, almost dry in others, making it a nightmare for the drivers to judge. Before anyone could complete a timed lap, Kevin Magnussen dabbed a wheel on a wet painted white line and went off at Acque Minerale, with the Haas just avoiding hitting the barrier. Although the Dane managed to navigate his way out of the gravel trap and return to pit lane under its own power, by then the red flag had already come out causing a five minute delay before the drivers could get back to work with just under nine minutes remaining on the clock.

Alonso led the return, but the Alpine slithered off track on his first flying lap attempt. Perez also went off at Tamburello, leaving the two McLarens briefly in charge before Leclerc went top with his time of 1:28.778s proving two hundredths quicker than Verstappen. The Red Bull was quicker on his next run only to come across a yellow flag at turn 16 for Bottas' Alfa Romeo which had ground to halt by the side of the track - and then started to slide down the hill on the wet grass.

Even so, Verstappen was able to complete his lap before the yellow became a red flag. Remarkably he had still set the quickest lap of Q3 with his time of 1:27.999s being a major improvement of almost a second on his previous best, despite clearly backing off in response to the waved caution for Bottas. "I did a massive lift when the yellow flags came out," he insisted over the team radio to the Red Bull pit wall as he headed back. Team principal Christian Horner confirmed: "He followed all the marshals' advice." That would be enough to satisfy the stewards and allow the lap to stand, but it remains to be confirmed by the powers-that-be-should they care to investigate.

Three minutes now remained on the clock, which was too tight for anyone to realistically complete the preferred two-lap push strategy especially as further light drizzle was now passing over the circuit. Verstappen put himself at the front of the queue and soon reported a lack of grip; Leclerc was urged to pass him but found no way to do so, even before Norris crashed out and glanced the barriers at Acque Minerali to trigger a final red flag stoppage.

With insufficient time remaining to resume, it meant that Verstappen had successfully taken pole from Leclerc, with Norris set to start from third provided the MCL36 didn't sustain major damage in that final incident. Magnussen had managed to bounce back from his early run-off to take fourth from Alonso, Ricciardo, Perez, Bottas and Vettel. 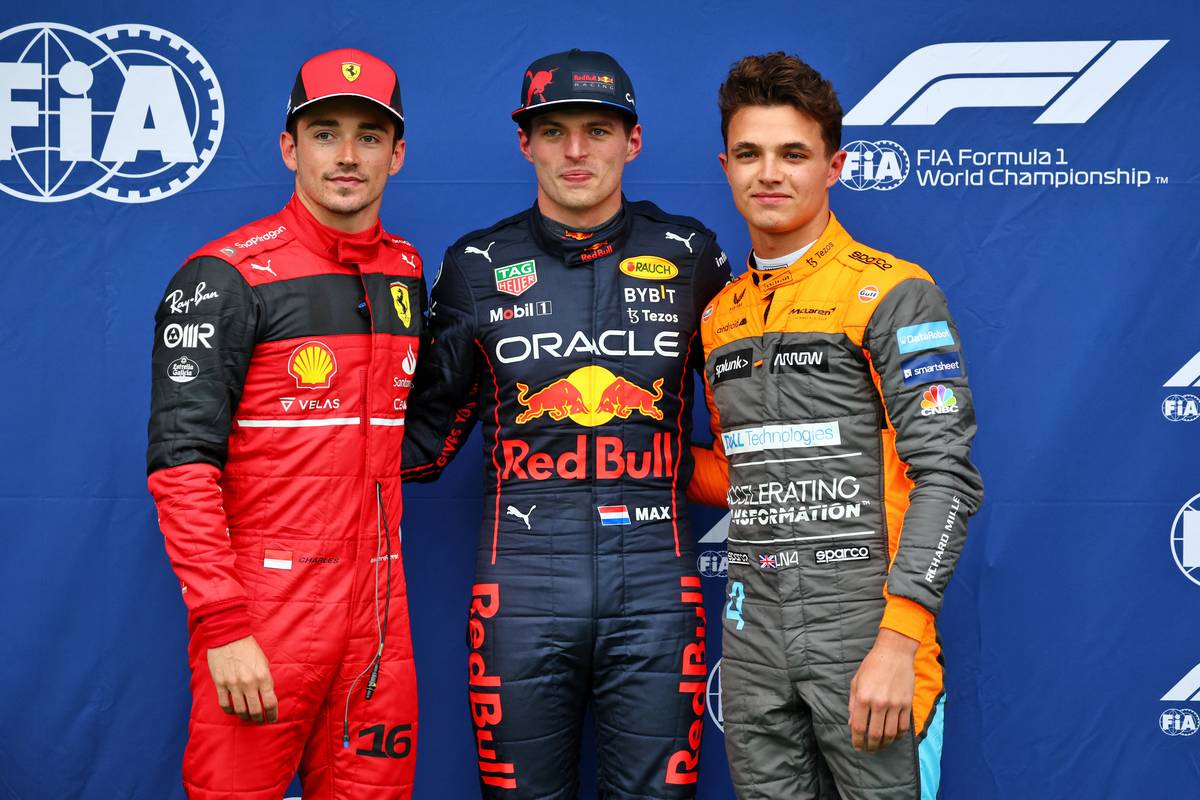 Hamilton: Each F1 weekend 'is a rescue' for Mercedes