Carlos Sainz admitted that it had been difficult to recover his confidence overnight after a heavy accident during Friday's second free practice session for the Miami Grand Prix.

The Ferrari had spun going into turn 14 at the Miami International Autodrome, and while Sainz had tried to catch it he ended up going into a hard concrete barrier that ended his session.

Alpine's Estaban Ocon had a similar accident in final practice on Saturday. In his case the impact was so heavy that the chassis of his car was cracked, forcing him to sit out qualifying while the team began building up a new one.

The damage to Sainz' car had been less severe and the team were able to make repairs overnight. But it had clearly left its mark on the driver, especially on the back of consecutive first lap retirements at Melbourne and Imola.

Afterwards, Sainz conceded that he was "still learning a lot of this car" and that the F1-75 was still "surprising" him .

"It wasn't easy at all to get the confidence back in such a difficult circuit like it is this new one on Miami," he admitted. "Just building a bit from the pretty heavy crash yesterday.

"I haven't done any long runs yet. I haven't put the fuel on the car and tried it," he explained. "So tomorrow, the laps to the grid will be the first time to have a feel, which could be quite challenging."

But despite this, Sainz will be lining up on the front row of the grid alongside team mate Charles Leclerc, after his final run in qualifying was swift enough to put him ahead of Max Verstappen and help secure a Ferrari front row lock-out. 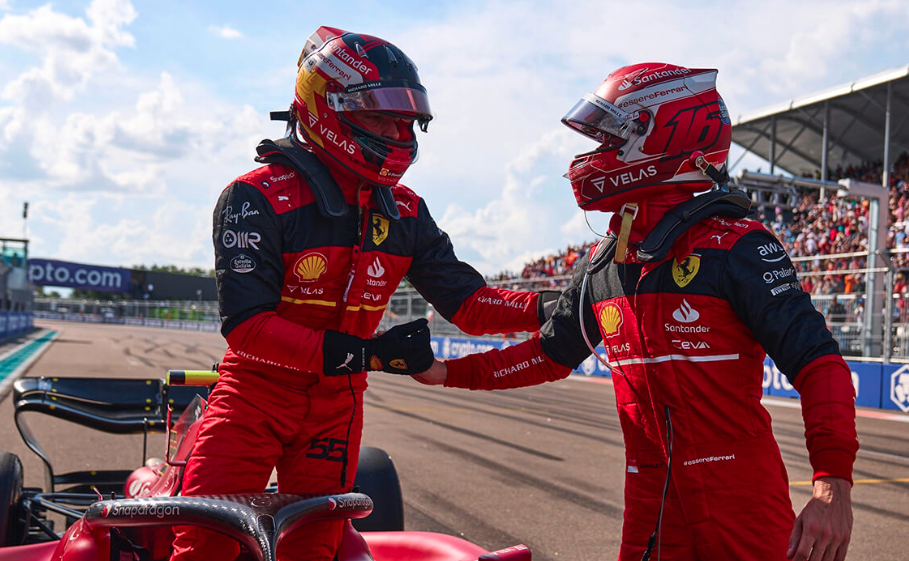 "Yeah, kept it cool until Q3," he said. "I think I pulled out a couple of good laps - not quite enough for pole position, but given from where I was coming yesterday I'll take it.

"It was a strong comeback after yesterday and I managed to improve run after run, to finally fight for pole up until the very last corner. I had fun out there, pushing the car, and we are in a good position for tomorrow.

"I think it is gonna be an interesting day with everything that's going on this weekend," he added. "Starting from the front row will help for sure.

"We will do everything to maximise the potential for the race, as there are a lot of factors to take into account.

"At the same time I'm feeling confident with the car," he said. "The car is really good to drive around here, so I think we can do a good job."

Verstappen 'surprised' to be so competitive in qualifying

Hamilton: No step forward for Mercedes despite 'much better qualifying'