Ferrari and Red Bull have traded blows in the opening four races of the season, but the Milton Keynes-based outfit's RB18 has the edge over the Scuderia's F1-75 when it comes to maximum velocity.

That virtue was clearly displayed by the bulls in Saturday's qualifying in Florida, with Sergio Perez and Max Verstappen topping the speed trap readings on Miami's sector 3 back straight.

Both drivers were 4 kph ahead of the field, but on average a whopping 10 kph faster than Ferrari's Charles Leclerc and Carlos Sainz, even despite the latter running a low-drag rear wing in Miami.

And yet Ferrari's chargers locked out the front row in yesterday's shootout, thanks to their F1-75 traction and phenomenal grip around the corners.

But as Leclerc warned after qualifying, Red Bull's top speed is no joke and keeping Max behind is likely to be a complicated task on Sunday, but one that might be helped by some handy strategy.

With tyre degradation over the course of the 57-lap race still an unknown quantity, the jury is still out as to whether a two-stopper should be the norm versus a one-stop race.

But uncertainty is what keeps us riveted to the show… 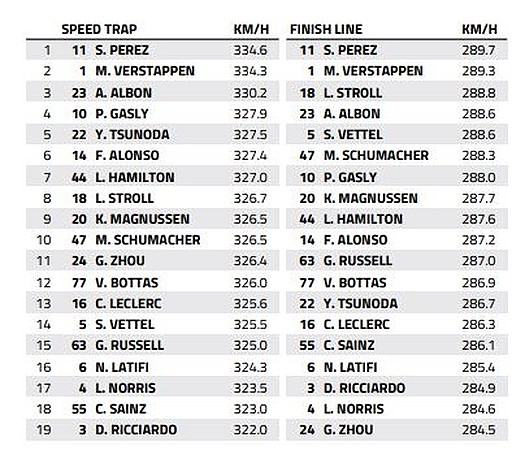