Leclerc had led the race from pole but lost his advantage in a messy mid-race pit stop sequence, which cost him time waiting behind Sainz, and ended up putting Perez in charge. Sainz kept him under intense pressure all the way to the finish of the time-limited race, which ended after 64 laps.

The race had been delayed by almost an hour because of a huge downpour just moments before the scheduled start. The track gradually dried up but there was an extended red flag for repair barriers after a heavy accident for Haas' Mick Schumacher.

Despite the sunshine that had bathed Monaco throughout Friday and Saturday, there had been talk all week of possible rain on Sunday. Even so there was a real feeling of shock when the precipitation actually materialised, and with an astonishing sense of timing heightening the drama. It began just as the grid was being cleared of the dense throngs of the rich and famous, who were now seeking cover and stealing umbrellas to use for shelter. Nor was it just a few drops falling here and there, but soon developed into a full-on downpour. The mechanics initially bolted on intermediate tyres and then swiftly switched to full wets as the race start was delayed and plans put into place to get underway behind the safety car, in what would now clearly be the first wet Monaco race since 2016. 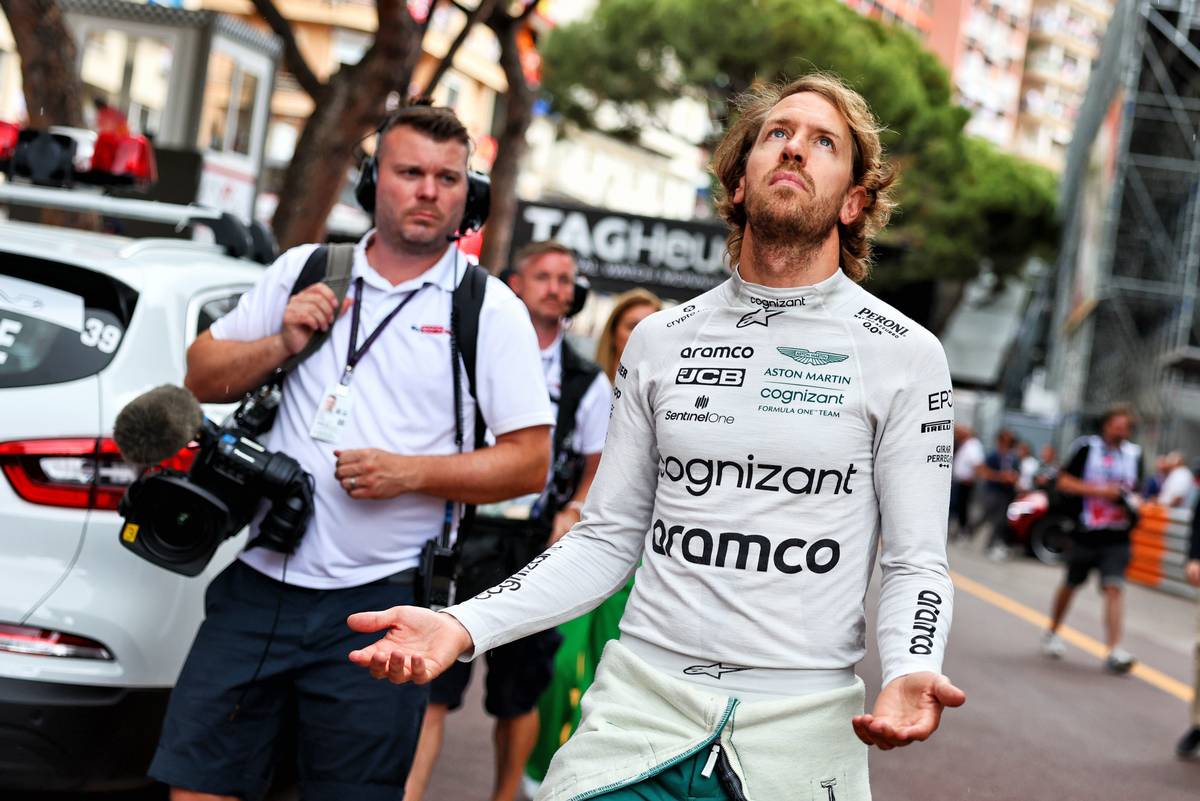 The rain had more or less stopped by the time the cars tentatively pulled away from the soaked grid, sending spray up in rooster tails even at this low speed. Ferrari held the upper hand with Charles Leclerc and Carlos Sainz on the front row, and Red Bull pair Sergio Perez and Max Verstappen immediately behind them. Conventional logic dictated that the winner would come from one of these four, but the inclement weather transformed the outlook and now McLaren's Lando Norris, Mercedes' George Russell and Alpine's Fernando Alonso were all in with a chance of staging an upset - as was Lewis Hamilton starting from eighth.

The cars were only midway through the formation lap when the heavens opened anew and the rain was lashing down again. "I've never got this wet in a Formula 1 car, ever," commented Mick Schumacher from the Haas. Even the battle hardened veterans among the drivers admitted the situation was far worse than they had expected. The monsoon-like conditions, fast-flowing rivers and growing lakes of standing water meant a red flag was inevitable, and the cars duly headed back to relative safety under temporary gazebos on pit lane to wait things out. Just over an hour after the original start time, the rain had finally stopped and conditions allowed a second - and this time successful - attempt to get things running behind the safety car.

It wasn't long before the inevitable incidents began: Nicholas Latifi skated into the barriers at the hairpin dislodging the front wing of the Williams, and Lance Stroll had a mishap at Massenet leaving him with a puncture on the Aston Martin. Undaunted, race control got the show started with a rolling start shortly thereafter with the safety car coming in leaving Leclerc and Sainz slithering through Sainte Devote as the leaders retained position. There were plenty of near-misses, including on pit lane where Latifi and Schumacher nearly collided having come back in to change to inters, as had Pierre Gasly. Although the AlphaTauri suffered a big scare moments later, Gasly was soon setting the fastest sector times suggesting more would soon follow. 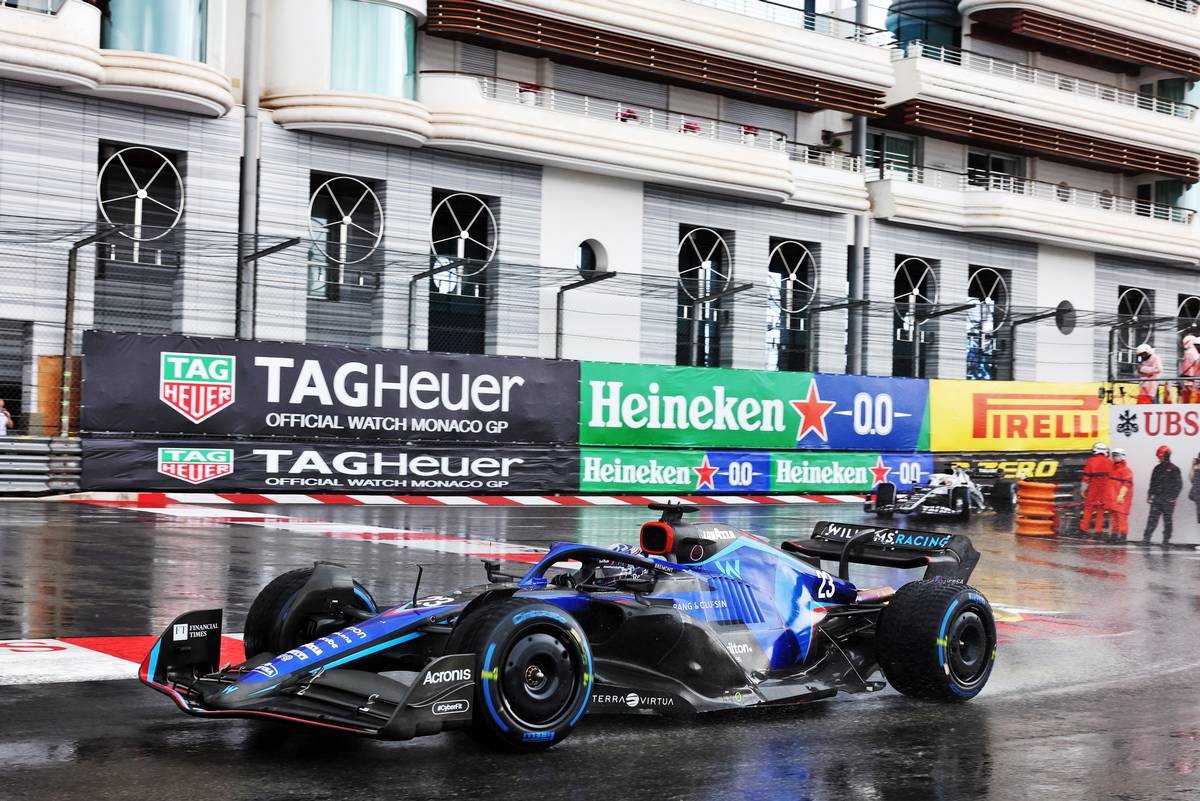 Sebastian Vettel was next to pit from tenth for inters on lap 7, accompanied by Yuki Tsunoda. Whatever compound they were on, everyone was struggling to hold on to the rear of their cars with Verstappen reporting that conditions were still too tricky to change tyres. As if to prove the point, Russell then missed his braking point and skated across the Nouvelle chicane, but he was able to recover without losing sixth place from where he was pushing hard to catch Norris.

Gasly had been increasingly frustrated to find himself stuck behind Zhou Guanyu in P13, which was the last car not to have pitted so far. He finally got around the Alfa Romeo on lap 13 and Gasly immediately set his sights on catching and dispatching Daniel Ricciardo, and he did so decisively at Tabac on lap 14. "It's definitely inters now," Perez told the Red Bull pit wall - but it was Hamilton who acted first on lap 16, costing him only one position to Esteban Ocon. Next time round Perez was also in for service and in his case the tariff was two dropped spots, allowing Verstappen to move up to third ahead of Norris. Ferrari dithered, first ordering Sainz to come in and then bowing to the driver's preference to stay out.

Instead it was Norris who was next to pit, coming back out in seventh just ahead of the duelling Ocon and Hamilton who had made contact in turn 1 on lap 19 when Ocon defensively turned across the front of the Mercedes at Sainte Devote leaving Hamilton with damage to his front wing. At the front, Leclerc then surrendered the lead to come in for inters, followed by Verstappen, which handed the lead of the race to Sainz. However it was Perez now back up to second behind the yet-to-stop Sainz who had come out of the sequence with the whip hand. Behind Leclerc and Verstappen, Russell and Alonso were next but also yet to stop, followed by Norris and then by the still-battling Ocon and Hamilton. 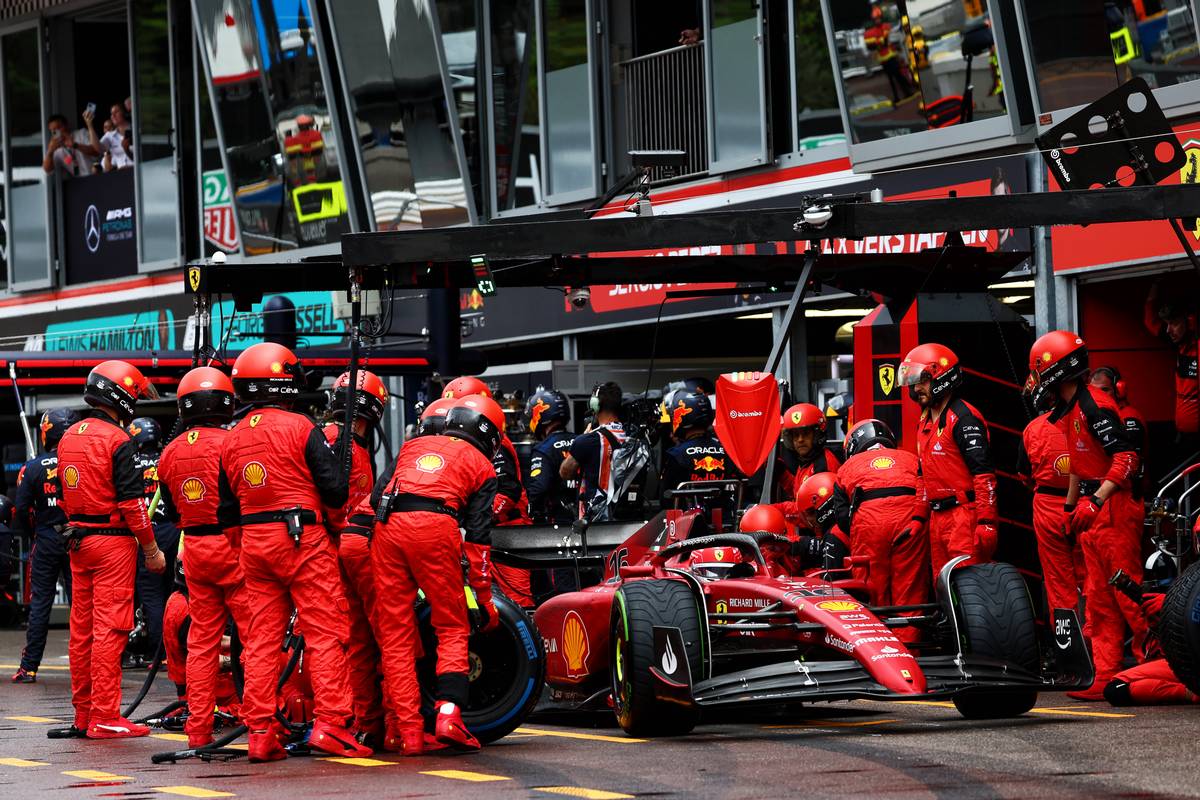 Ferrari then went for a major gamble, calling Sainz in not for inters but for a set of the dry weather hard compound. There seemed to be confusion in pit lane with Leclerc also coming in at the same time, but apparently caught by surprise by the tactic. He proved right to be furious, as the Red Bulls quickly reacted by smoothly double stacking their own cars on pit lane on the next lap. The overcut allowed Perez to come out of it with the lead from Sainz, and Verstappen jumped an unhappy Leclerc at the same time. Russell had also stopped for slicks and was now up to fifth ahead of Norris, Alonso and Hamilton who had finally taken care of Ocon, while Stroll was the highest placed car still on inters in tenth. Once he came in on lap 25, it was Valtteri Bottas who moved into the points.

Given the treacherous conditions it was remarkable that there had not been any major incidents so far. But that changed on lap 27, when Mick Schumacher suffered a heavy crash into the barrier at the exit of the swimming pool. Although Schumacher was unhurt, the VF-22 had broken in half from the force of the impact, triggering a safety car and then red flags as the buckled barriers underwent extensive repairs. Schumacher's Haas team mate Kevin Magnussen had already just retired from the race with a water pressure loss, so that was both Haas cars done for the day.

There was a 20 minute stoppage that packed up the field and allowed everyone to change tyres: Red Bull, Mercedes and Alpine opted for mediums, while Ferrari stuck to the hards as did McLaren and Aston Martin, and it was a split call at Alfa Romeo and AlphaTauri. Mercedes had also been able to repair the endplate damage to Hamilton's front wing stemming from his clash with Ocon. With the two hour race clock now in effect curtailing the expected final lap count, the teams reported that no more significant rain fall was expected before the finish - which was not what Leclerc was hoping to hear. "Perfect", he said through clenched teeth as his prospects for home glory waned by the minute. 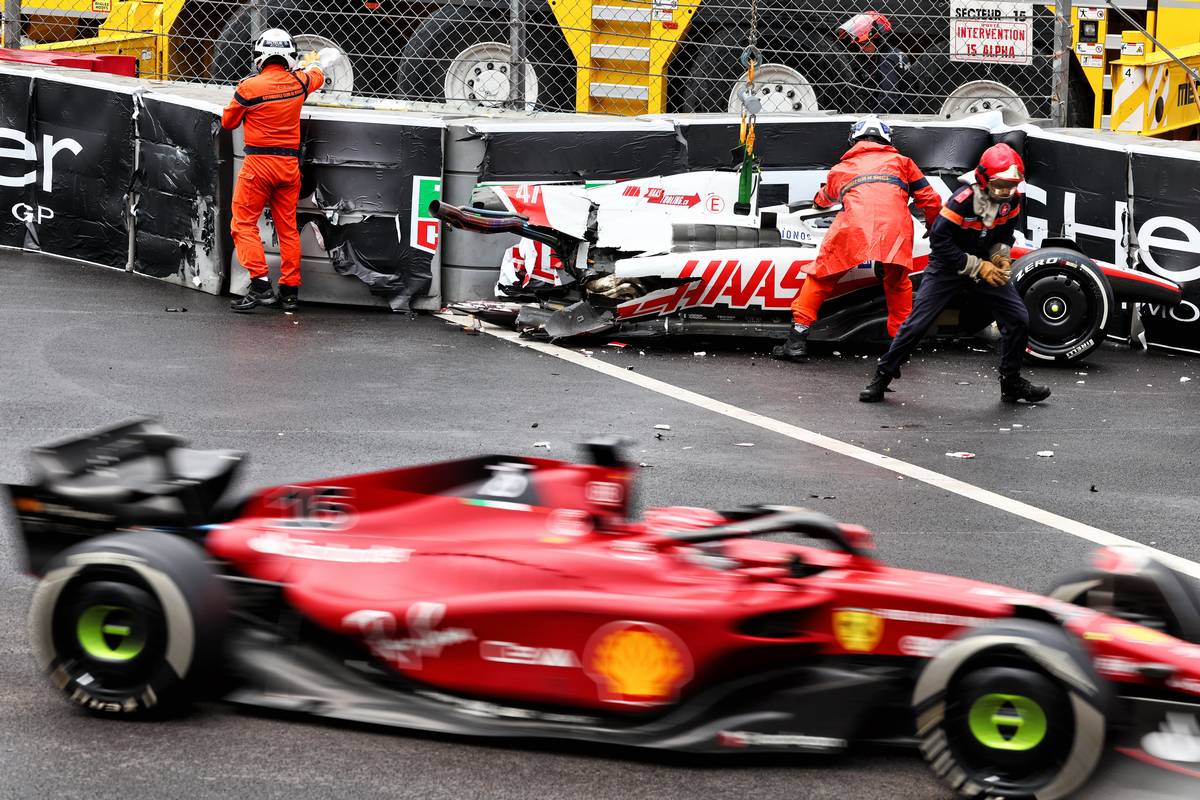 The race resumed with another rolling restart on lap 33. Perez immediately suffered a huge front left lock-up into Mirabeau leaving him with a massive flatspot on those new tyres. But crucially he was still in the lead by a second from Sainz, Verstappen, Leclerc, Russell and Norris, with a strikingly sluggish Alonso under heavy but unproductive pressure from Hamilton for P7, leaving Ocon and Bottas resigned to watching on from behind.

The drying conditions meant that DRS was finally enabled on lap 39, giving Sainz hope of applying pressure to Perez for the lead. The Red Bull soon pulled away out of danger and the gaps between each of the top six cars stabilised at around three seconds. However Alonso quickly fell a whopping half a minute off the back of Norris before finally picking up the pace again from lap 50. Not everyone had settled for where they were, and even though it was a battle right at the back Zhou still threw the Alfa into a wild lunge on Tsunoda that saw him flying across the Nouvelle chicane, coming very close indeed to a spectacular accident. "I tried," he said over the team radio, quipping: "I need some new pants after that!"

Norris used the space he had pulled out over Alonso to make a 'free' pit stop for fresh mediums on lap 52. Tyre wear was becoming a serious issue for the race leader, with Perez' mediums visibly degrading. It allowed Sainz to turn up the pressure and close the gap on the Red Bull, pulling back within DRS range. Verstappen and Leclerc were snapping at their heels, but they had too much at stake in the championship to risk making any rash moves - unlike Sainz, who came close to rear-ending Perez on several occasions as he pushed to the very limits in an all-or-nothing blitz on the Mexican. 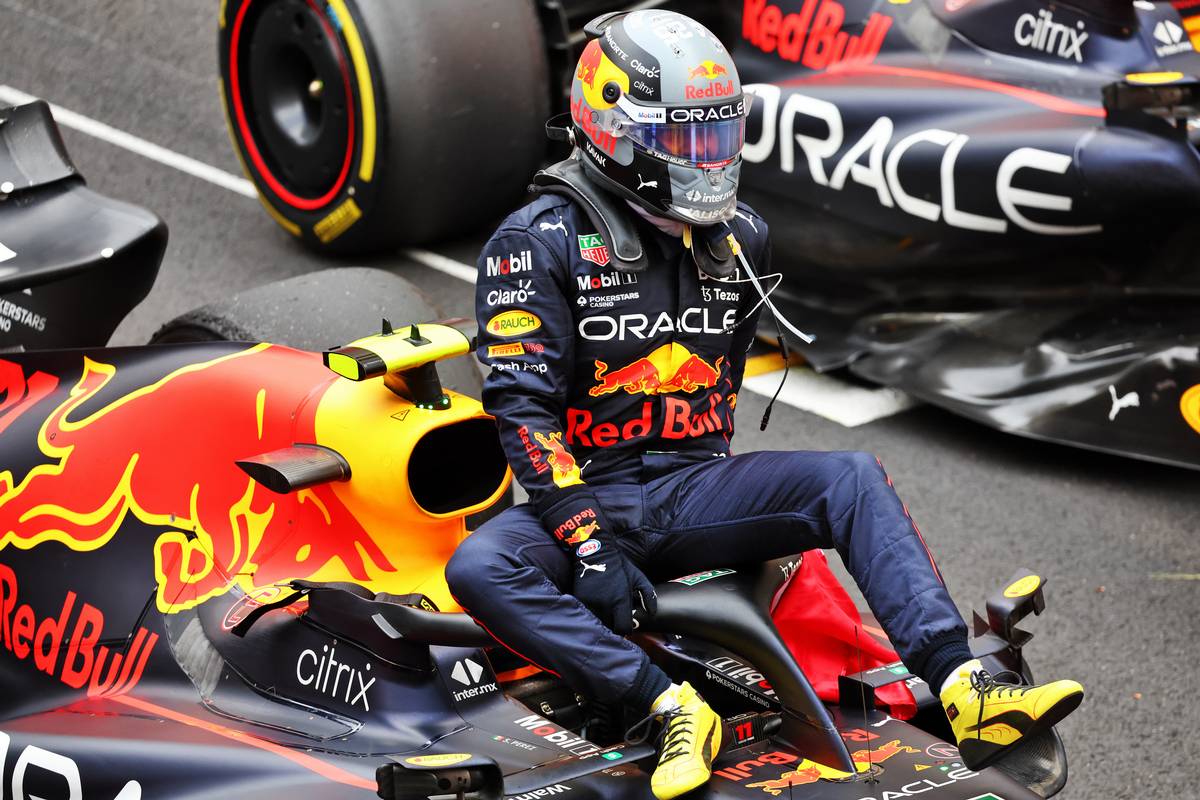 In the end, Perez had enough in reserve to hold on for the win over Sainz and Verstappen, putting any team order frustrations that he had he experienced in Spain well and truly in the rear view mirror. A gutted Leclerc finished just off the podium in fourth followed by Russell, Norris, Alonso and Hamilton, and then by Bottas and Vettel after Ocon was handed a post-race five second penalty for his mid-race collision with Hamilton. That dropped him to P12 behind Gasly, with the final finishers proving to be Daniel Ricciardo, Lance Stroll and Nicholas Latifi, followed by Zhou Guanyu who had finally got the better of Yuki Tsunoda. Williams' Alex Albon joined the two Haas drivers in retirement.

The result brings Perez into serious contention in the drivers championship. Just 15 points cover the top three of Verstappen, Leclerc and Perez after the first seven races of 2022, while Red Bull has a 36 point lead over Ferrari in the constructor standings.

Leclerc rues 'too many mistakes' from Ferrari in Monaco GP