Wet weather at Silverstone resulted in a breathless qualifying session for the British Grand Prix, with times varying wildly and positions changing by the second all the way until the chequered flag.

Ferrari's Carlos Sainz ended up with the perfect run at just the right time in Q3 to secure his maiden Formula 1 pole position by 0.072s from Red Bull's Max Verstappen, with their respective team mates Charles Leclerc and Sergio Perez forming the second row.

Not even huge local support could help Lewis Hamilton continue his run of qualifying success at his home circuit, but the Mercedes was P6 alongside compatriot Lando Norris in the McLaren while Fernando Alonso edged George Russell.

Surprise star of the incident-free session was Williams' Nicholas Latifi making it through to the final round entirely on merit, while team mate Alex Albon missed the cut at the end of Q1. With almost supernatural precision, ominous black clouds staged a surprise ambush on Silverstone and the rain started to fall with just minutes to go before the start of Saturday's qualifying session for the British Grand Prix. The question of who had been looking favourite for pole after final practice had been rendered moot: all bets were off and it was now anyone's game as the lights went green for Q1.

Q1: Verstappen fastest in the wet as Albon, Magnussen and Vettel flounder at sea

Williams' Nicholas Latifi was first to break cover and head out, with everyone forced onto the intermediates for their first run. Just Alpine pair Fernando Alonso and Esteban Ocon held back, in the hope that this would be a brief shower and conditions would improve as the session went on. Latifi's team mate Alex Albon went to the top of the timesheets with a lap of 1:49.914s but Charles Leclerc's Ferrari was immediately more than two seconds quicker on 1:47.521s which was too hot for Carlos Sainz and Daniel Ricciardo to handle.

The two Mercedes drivers Lewis Hamilton and George Russell then made their bow in second and third, but Max Verstappen moved the goalposts with his run before Leclerc regained control with a new time of 1:43.028s. Positions were being traded back and forth every minute as the rain started to ease off and the track began to shed the water snd something hinting at a dry-ish line started to emerge. 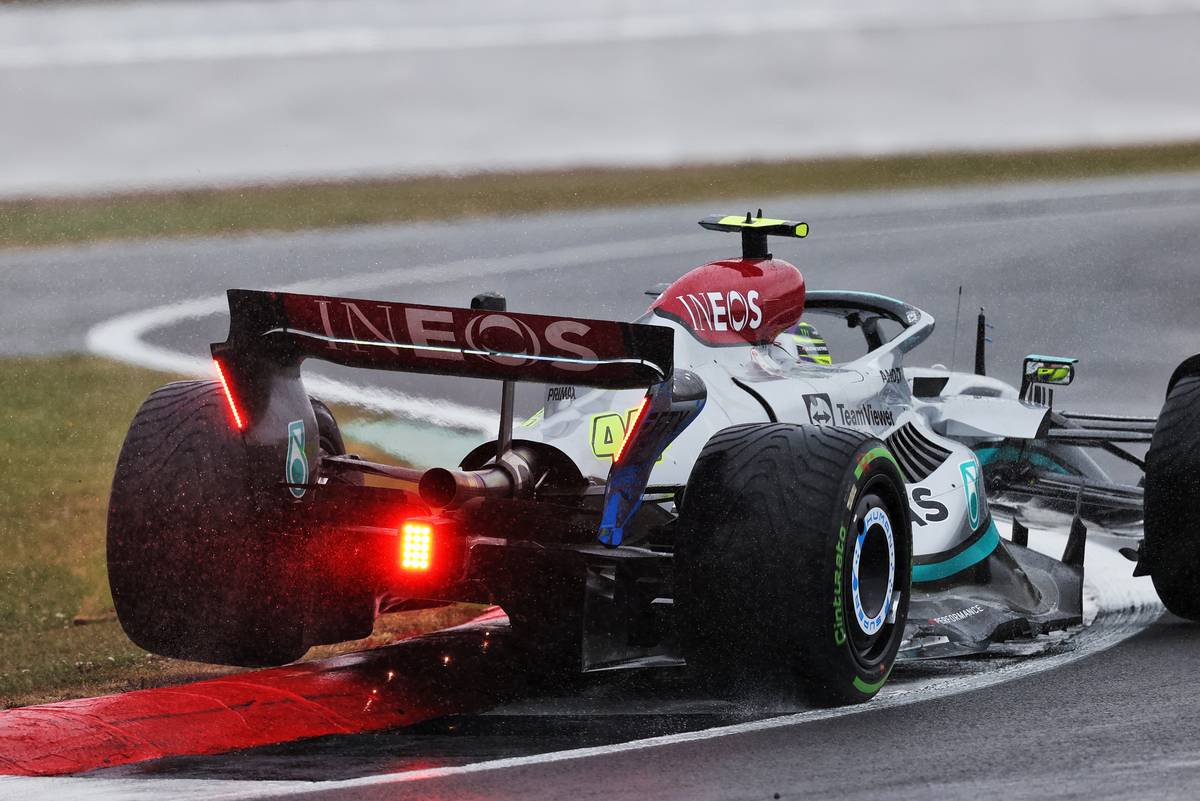 Halfway through it was Leclerc on top again with a time of 1:42.129s, seven tenths ahead of Verstappen, with McLaren's Lando Norris looking sprightly in third. A couple of minutes later Verstappen had posted a time of 1:40.452s, a third of a second quicker than Leclerc's latest riposte, with Russell now ahead of Sergio Perez. Look away, look back and Verstappen had improved to 1:39.975s with Leclerc now six and a half tenths back followed by Carlos Sainz.

More importantly, the bottom five in danger of elimination consisted of Latifi, Pierre Gasly, Lance Stroll, Daniel Ricciardo and Mick Schumacher all running out of time to ensure their progression to the second round. Ricciardo improved to 13th - safe for now but still too close for comfort - dropping Kevin Magnussen into the drop zone. Then Latifi pulled off the lap of his season to date to jump into the top ten, and Magnussen also got clear, leaving Ricciardo back on the bubble and Yuki Tsunoda and Sebastian Vettel at high risk of being sidelined.

It all came down to who could make the best use of their final run once the chequered flag came out: Tsunoda and Ricciardo both scrambled clear, but neither Vettel nor Schumacher could find the improvements needed. Nor could Vettel's Aston Martin team mate Stroll, while Magnussen was backed into the drop zone by late improvements elsewhere. The surprise elimination was Albon who ended up P16 and venting his frustration with the team's tactics despite running Williams' latest upgrades on the FW44, while by contrast Latifi managed to scrape through in 15th. 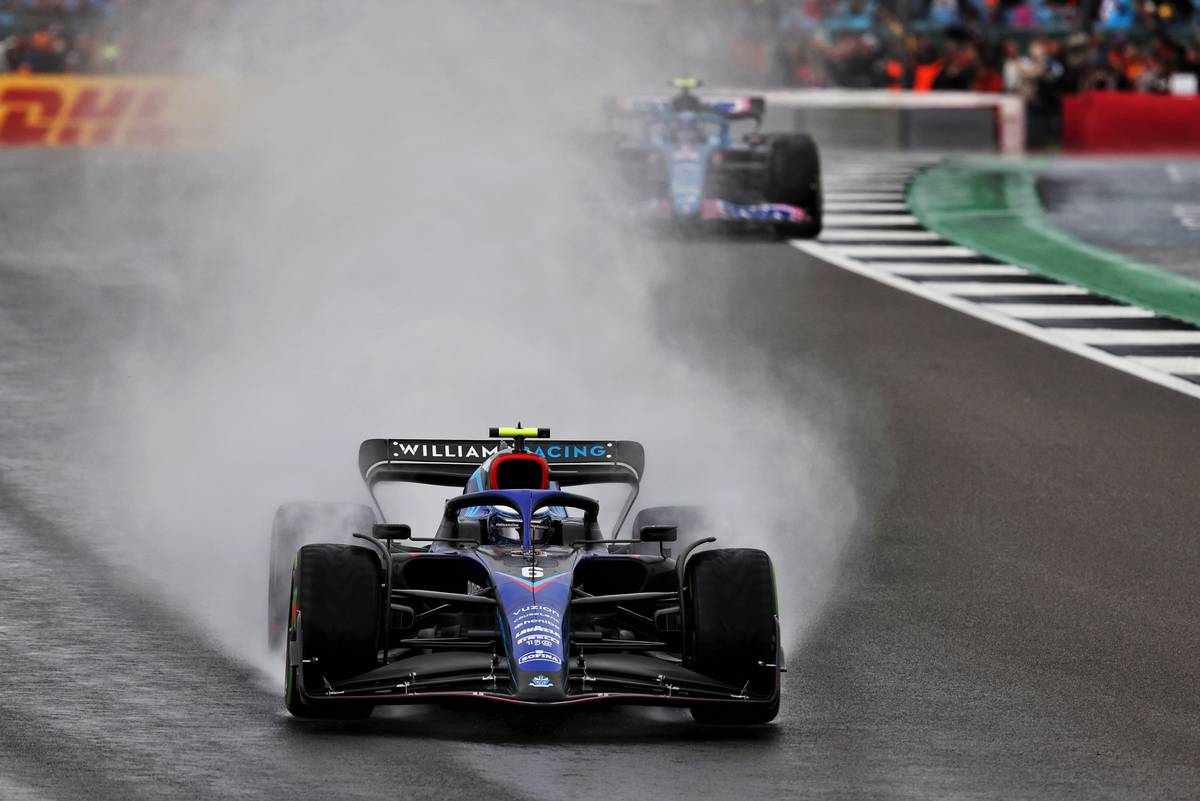 The drizzle had picked up again by the time the 15 remaining cars returned to action for the start of the second round, with Latifi once more early to head back out on track ahead of Alfa Romeo's Zhou Guanyu. Everyone remained on the intermediates, although Hamilton was already complaining about vibrations on this set.

Zhou took an initial turn on top with a time of 1:44.029s, with Alonso then almost a second quicker before being bettered in turn by Perez. Verstappen soon set a new target time of 1:41.486s leaving Hamilton and Russell to settle into fourth and fifth. Norris made a noble attempt by going second quickest and splitting the two Red Bulls, but he was then bumped down first by Leclerc and then Hamilton going quicker - although neither could topple Verstappen who had trimmed his time further to 1:40.655s.

Sainz and Russell also made gains and moved up to fourth and fifth ahead of Norris as the rain again picked up in intensity, making conditions even harder with Verstappen sliding off at Chapel and Norris reporting "It's getting too bad, I'm starting to aquaplane a lot" over the McLaren team radio. It was spelling danger to those still outside the top ten with Gasly and Tsunoda, Ocon, Ricciardo and Valtteri Bottas all under threat and unable to improve as the track once again got wetter and wetter. But it was music to the ears of Latifi, who was clinging on to the top ten and a prospective spot in the final pole shoot-out round.

All the others could do was hope that the rain stopped in time for conditions to improve before the chequered flag. It didn't, and instead it was verging on the need for extreme wets as the clock ran out. Despite setting a personal best first sector, Ocon went wayward onto the Wellington Straight meaning he was out along with Gasly, Bottas, Tsunoda and Ocon. With no one making any late gains, Latifi had indeed succeeded in progressing to Q3 - despite a late scare when the Williams went off at turn 3. 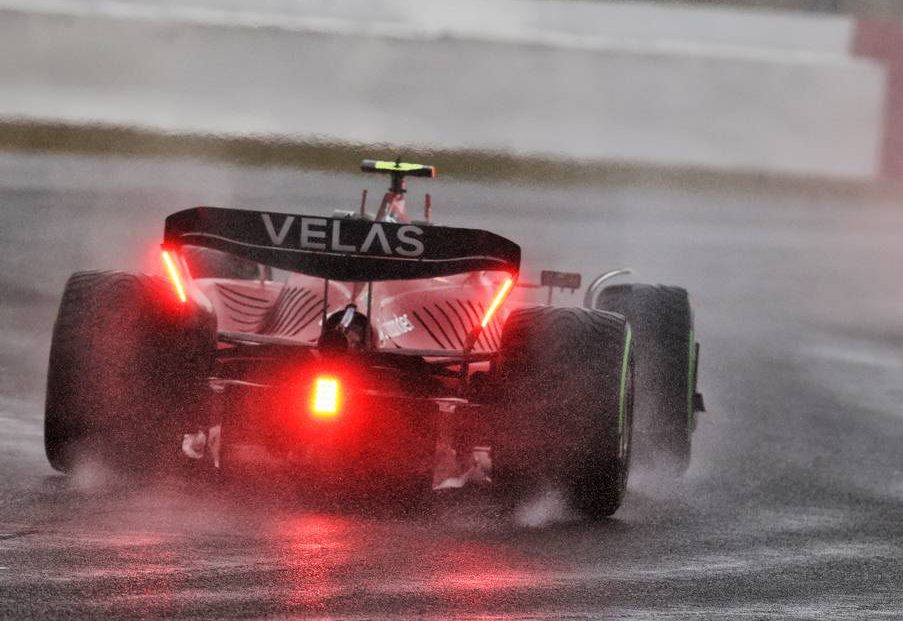 Q3: Sainz times it perfectly to snatch pole from Verstappen and Leclerc

It had stopped raining, but more precipitation was still a distinct possibility as the Ferraris led the field back out for the start of Q3, followed by Max Verstappen. It meant no one knew whether the lap they were on was would be their best chance. Zhou seized his moment and went top with a time of 1:49.454s, and then experience triumphed over youth with Alonso going three seconds quicker on 1:46.227s.

The Ferraris then assumed control, but Verstappen's first flying lap ended up with a spin at Stowe that he did well to control and end up pointing in the right direction. Unfazed, his next lap was good enough to take second, just a whisper behind Leclerc, as Alonso went into third ahead of Perez and Hamilton, Sainz and Zhou.

Verstappen then slammed in an imperious 1:42.996s to go almost two seconds clear of Leclerc. Other drivers then improved to flood into the gap, with Hamilton and Russell going second and third ahead of Norris and Perez leaving Leclerc now in sixth ahead of Alonso and Sainz, and Zhou and Latifi keeping themselves to themselves as they decided the pecking order on what would be the fifth row on the grid for tomorrow's race.

Hamilton was within 0.027s of Verstappen's time but the changing conditions rewarded the Ferraris who went much quicker, although neither could stop the Red Bull recapturing provisional pole with a time of 1:41.055s from Leclerc and Sainz. Perez, Norris and Alonso then improved to split the Ferraris, but Sainz responded by going quicker still and all the way to the top with a time of 1:40.983s which was 0.072 better than Verstappen could scrape together in response. Perez narrowly beat Hamilton in their battle to decide fourth, leaving Norris in sixth from Alonso, Russell, Zhou and Latifi.