Max Verstappen put in a perfect display of cool, calm race management to recover from a disappointing time in qualifying that had left him P10 on the grid together with a spin in the race itself to take his eighth victory of 2022 in the Hungarian Grand Prix.

Mercedes came away with their second consecutive double podium success of the season, with Lewis Hamilton and George Russell claiming second and third ahead of Ferrari's Carlos Sainz.

Overall it was another horrible day for the Scuderia, with Charles Leclerc taking the lead early in the race only to drop to sixth after another strategic miscue over tyre choice and pit stop timing dropped him 80 points behind Verstappen in the drivers championship. 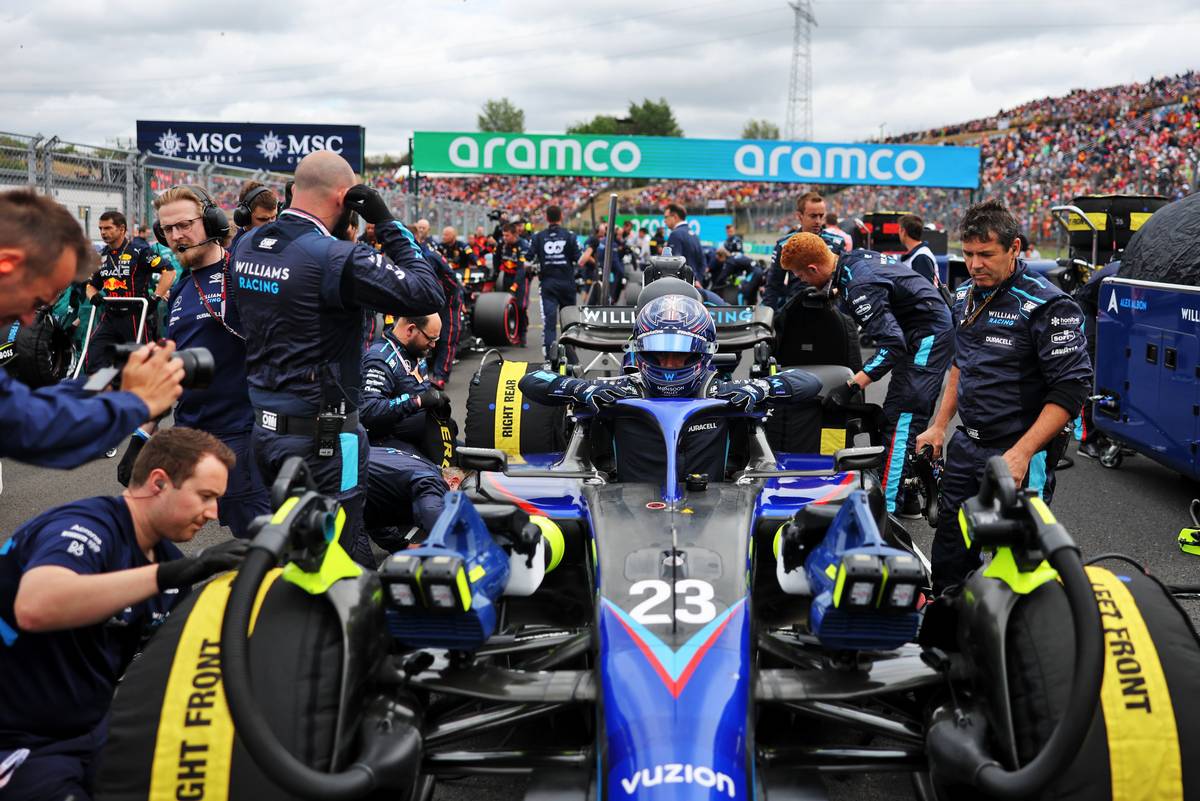 There had been some more rain overnight that had dried up during the morning, and the clouds were closing in again with spots of rain and drizzle in the air amid much cooler, windier conditions by the time the cars headed to the grid for the start of Sunday's race at the Hungaroring. For the first time in his Formula 1 career, Mercedes' George Russell took point after successfully pipping Ferrari pair Carlo Sainz and Charles Leclerc to pole in yesterday's qualifying session. Lando Norris was in fourth for McLaren ahead of an all-Alpine line-up of Esteban Ocon and Fernando Alonso, but a DRS issue yesterday had left Lewis Hamilton in seventh while a power unit problem had consigned championship leader Max Verstappen to tenth where he was starting just ahead of team mate Sergio Perez, both Red Bulls on soft tyres after replacing their power units overnight as a precaution.

For Russell, the pivotal moment came right at the start when the lights went out: could he manage to survive the initial assault of the Ferrari pair? He had opted to start on soft tyres to give himself the best chance of doing so, with Ferrari playing the long game on mediums. The answer was that Russell was indeed up to the task to repelling a muscular start from Sainz who attacked around the outside of turn 1, while Leclerc settled for holding off the soft-shod Norris as Hamilton got the jump on both Alpines to move up to the fifth.

Behind them, close-quarter skirmishes had deposited some bodywork from Alex Albon's car on the racing line at turn 2, necessitating a brief Virtual Safety Car for retrieval as the wounded Williams pitted for repairs. When racing resumed, Russell found himself enjoying a comfortable lead over Sainz and Leclerc. Verstappen had already improved to eighth with Perez tucked in behind. Verstappen then breezed past Alonso on lap 4 with Perez soon pressing to follow suit. Behind them there was an entertaining joust for the final points spot between Haas' Kevin Magnussen and McLaren's Daniel Ricciardo which was initially won by the Dane - but it proved a Pyrrhic victory, as damage to his front wing saw him handed a black and orange flag obliging him to pit for repairs. 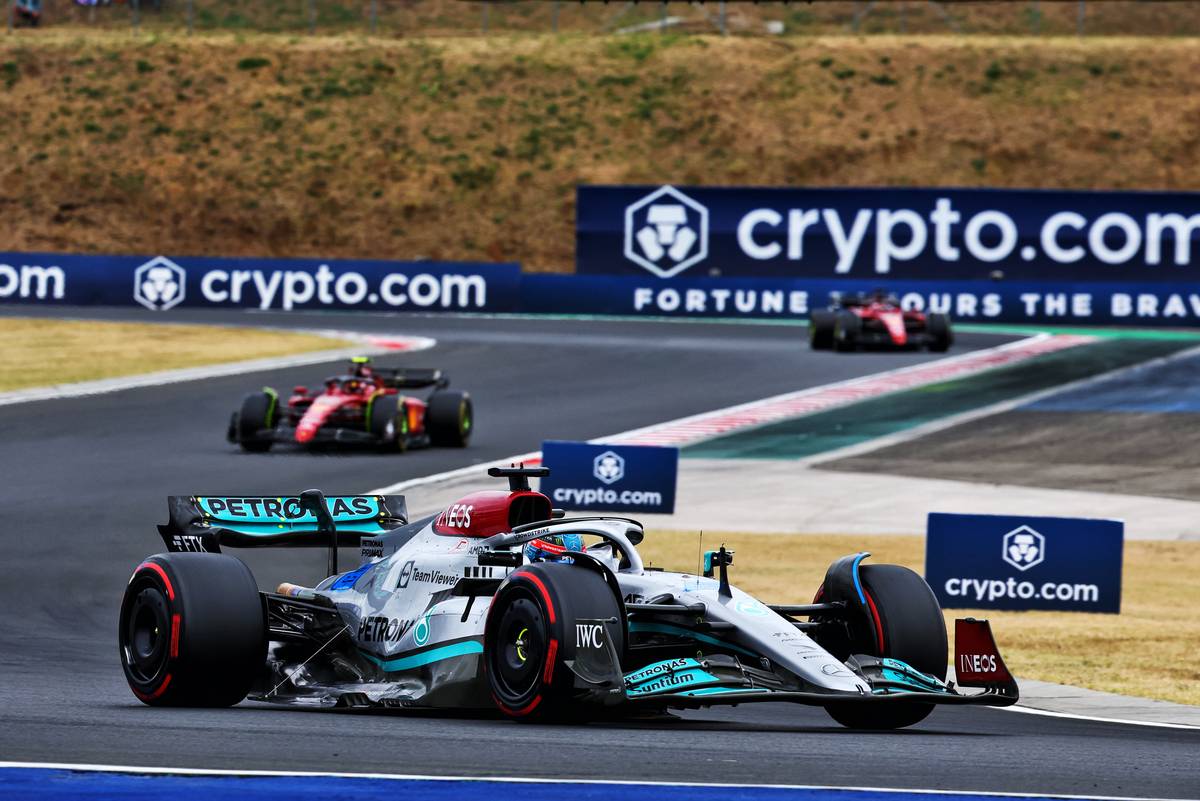 Reports of imminent rain seemed to have been greatly exaggerated, putting those on soft tyres who had been expecting an early stop for intermediates at a disadvantage. Russell was doing everything he could to not overuse his tyres, while Sainz and Leclerc seemed happy to hold station for now. The man under most pressure was Norris who was falling back from the Ferraris and into the clutches of Hamilton, who was himself now under pressure from Verstappen and Perez who had already succeeded in clearing both Alpines.

Using DRS, Hamilton scooted past Norris on the straight at the start of lap 12 with Verstappen also managing to follow him past the McLaren. On the next lap, Perez also picked off the Briton with considerable ease. Norris was in for what proved to be a slow stop to take on a new set of mediums on lap 15 and now the pressure was on Russell, still on softs but fast losing pace leaving him exposed to Sainz and Leclerc coming into DRS range on the mediums. Russell finally surrendered the lead and came in on lap 17, at the same time as Verstappen, but Sainz appeared to defy orders to remain out for an additional lap before finally coming in for a second set of softs which meant that he was committed to making a second stop.

Leclerc now held a ten second lead over Hamilton, with Russell back up to third on the mediums followed by Sainz, Ocon, Alonso and Verstappen, with Perez rejoining from his stop on lap 19 behind Mick Schumacher and Valtteri Bottas in tenth. Next time by it was Hamilton's turn to pit, coming out in seventh behind Alonso, but Leclerc continued to stay out despite his lap times starting to slide. Ferrari finally called him on on lap 22: it was now too late to put him back out ahead of Russell, but crucially he was in front of Sainz with Verstappen in fourth ahead of Ocon and Hamilton. Alonso also chose this moment to pit, switching to hard tyres and dropping out of the top ten. Ocon was in on lap 24 and he came back out just ahead of Ricciardo, who immediately took the opportunity to claim the scalps of both Alpines to move up to P10. It left the Alfa Romeos as the final cars still on their starting set of tyres, although they were now almost three seconds a lap slower than their peers. Bottas finally pitted on lap 27, Zhou shortly after. 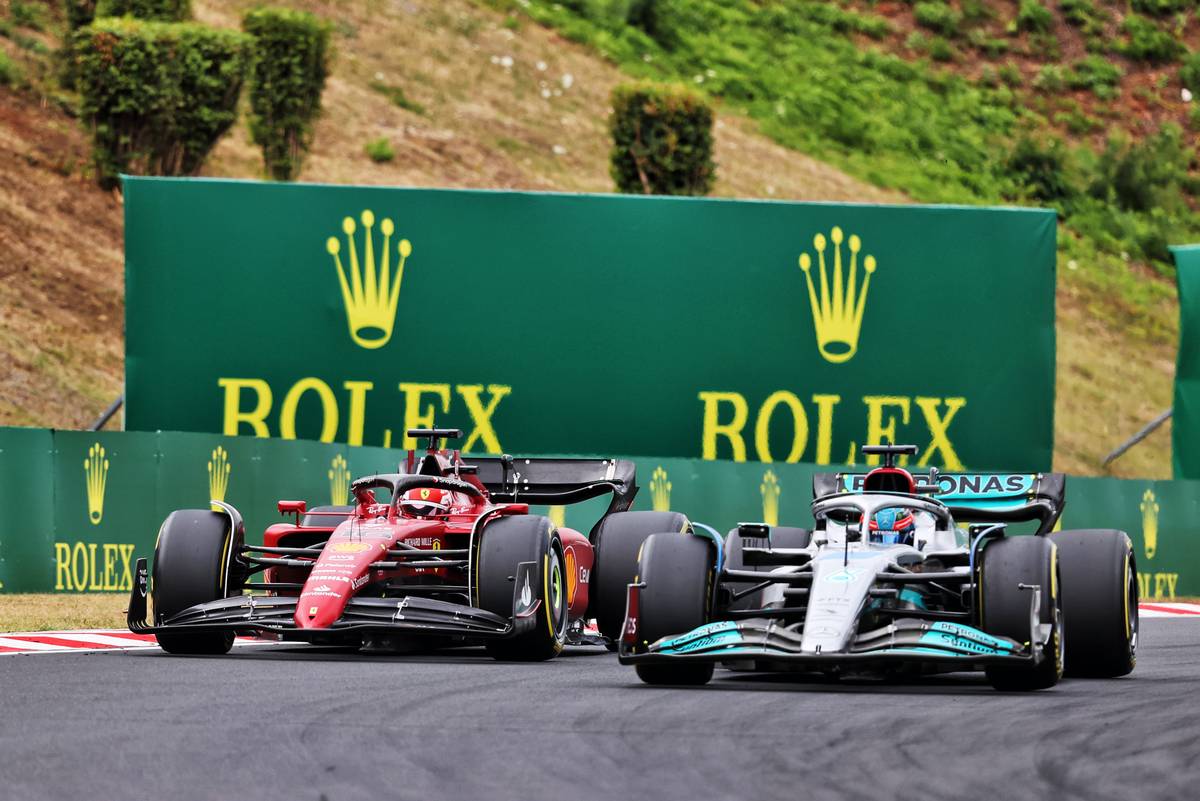 At the front, Leclerc was getting tired of the waiting game and on lap 28 he made his first serious move on Russell. The Mercedes survived the initial assault, but without the help of DRS he remained under serious pressure in the run to turn 1. Russell made his car as wide as possible, but on lap 31 Leclerc finally squeezed his way around the outside to claim the lead of the race leaving Russell to be hunted down by Sainz. Verstappen was close behind having dropped Hamilton, while Perez was running a lonely sixth ahead of McLaren pair Norris and Ricciardo. Lance Stroll was up to ninth ahead of Esteban Ocon and Sebastian Vettel, having picked off Alonso who was struggling on the hard tyres as the race reached the midpoint.

There had still been no retirements so far; Yuki Tsunoda went for a spin at the chicane but managed to avoid hitting anything and was soon back underway after a brief display of yellow flags. It came as some drivers were reporting the track was becoming noticeably greasy as the drizzle picked up again. That didn't stop Red Bull from calling in Verstappen for a new set of mediums on lap 39 as they aiming to undercut Russell and Sainz. He was followed in a lap later by Norris, and then it was Leclerc who pitted from the lead on lap 40.

He was followed in by Russell who come out behind Verstappen. The Red Bull then carried the attack to Leclerc, who was now on the hard compound for an attempt to go the distance. And then just when it seemed that the Dutchman had got the job done, the back end of the RB18 stepped out sending it into a full 360 rotation, allowing Leclerc to race back in front while Verstappen sorted himself out. "I dropped the throttle and I just spun!" he told the Red Bull pit wall. But it proved only a temporary reprieve for Leclerc, his pace too compromised on the hard tyres to resist another assault by Verstappen on lap 45. 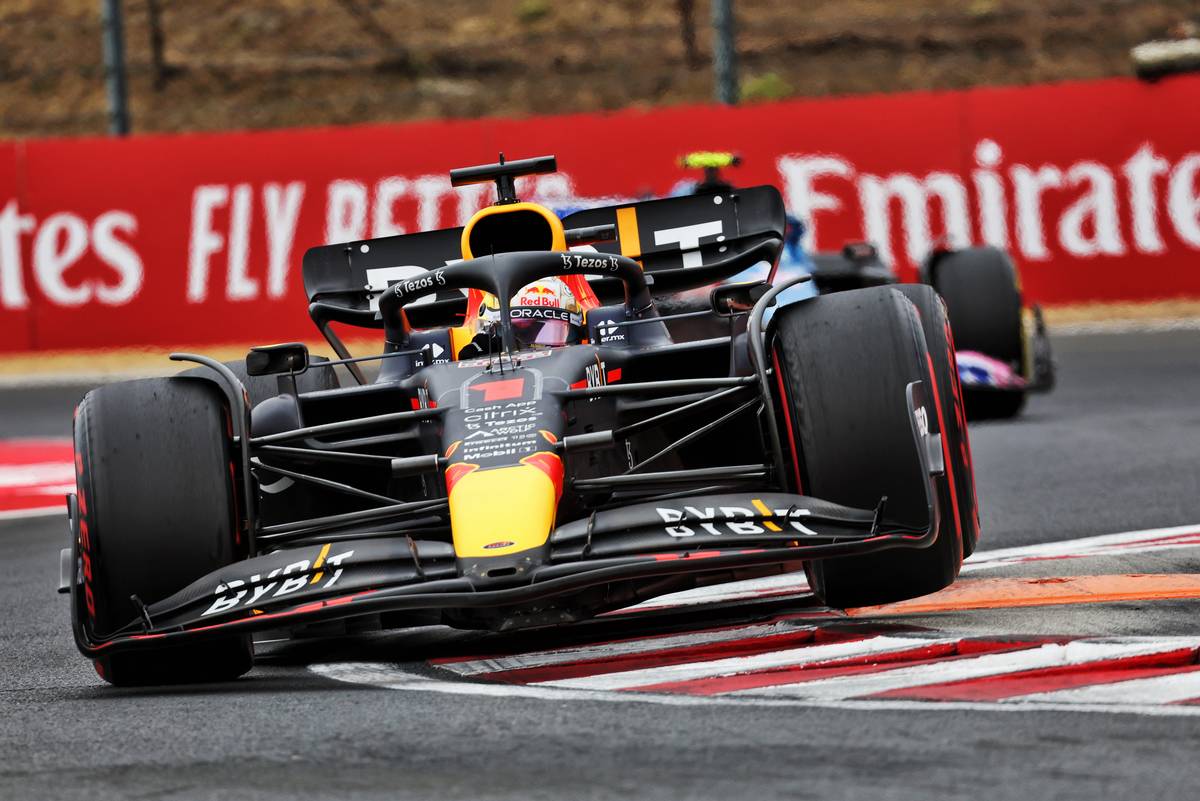 The gaps between the top five - Sainz, Hamilton, Verstappen, Leclerc and Russell - remained too small to allow anyone to pit again without losing a bunch of positions. When Sainz finally made his pit stop on lap 48, a problem on the rear left meant a slow release and he slipped to fifth, having opted to take on soft tyres despite 22 laps remaining to the finish. Further back there was a spat between Ricciardo and Stroll as the McLaren emerged from pit lane, with the stewards agreeing with Stroll that the Aussie has caused a collision which meant that he was handed a five second penalty.

Hamilton pitted on lap 52 for his second stop, also switching to the soft compound and coming out behind Sainz. Now the question was whether Verstappen, Leclerc and Russell could make it to the finish without another stop or losing too much pace in the process; surprisingly the man looking under most pressure was Leclerc, who was being assailed by Russell who finally extracted his revenge into turn 1 on lap 54 to snatch second place as Verstappen pulled seven seconds clear of the duelling pair. The Ferrari team wall crunched the numbers and decided their only hope was to pit Leclerc at the end of the lap to switch to the soft compound, in what looked horribly like another Ferrari strategy implosion as the Monegasque dropped to sixth behind Perez.

Ferrari's day continued to get worse with Sainz picked off by Hamilton midway down the straight on lap 63. Hamilton then went on to pass his team mate for second place on lap 65, giving Mercedes a second successive double podium success with Sainz left in fourth ahead of Perez and Leclerc. Norris finished 'best of the rest' in seventh having echoed the Alpine strategy of switching to the hard compound for the second stint which had succeeded in keeping him ahead of Alonso and Ocon, with Vettel taking the last point for tenth ahead of Stroll. 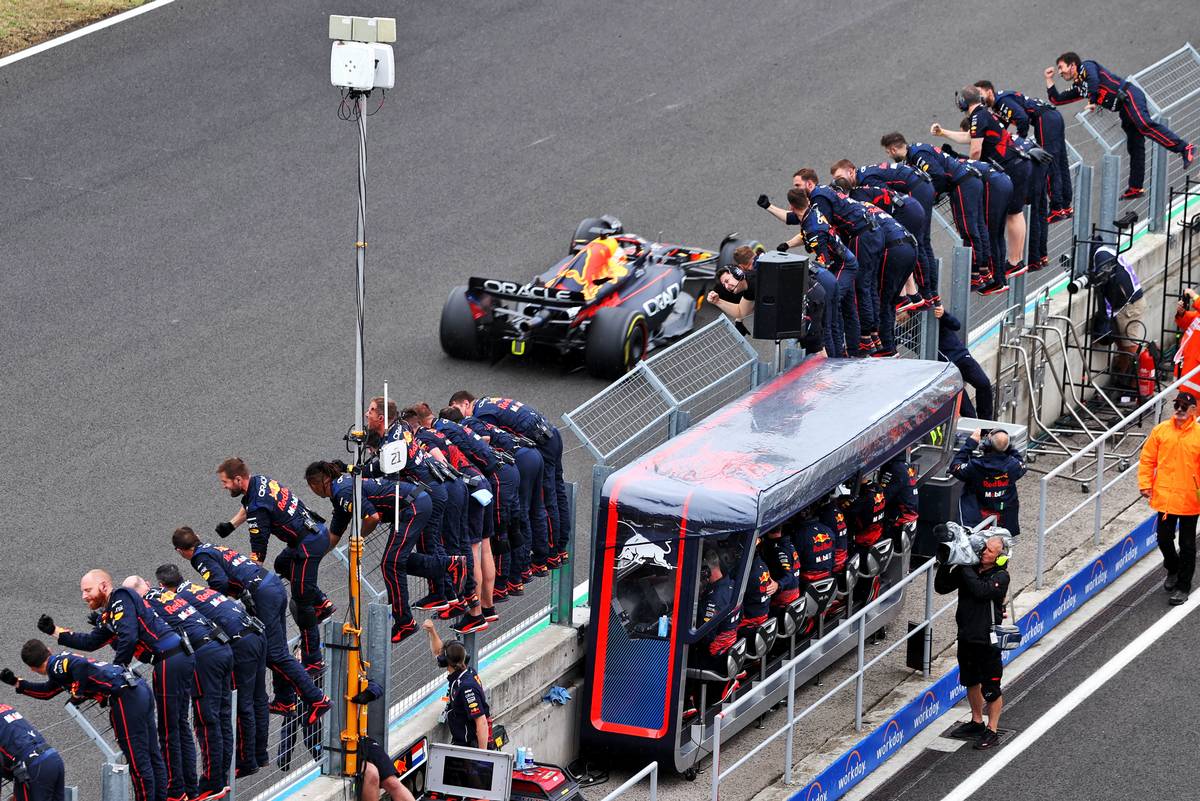 There was late drama with a retirement for Bottas triggering a Virtual Safety Car with three laps to go, as his Alfa Romeo lost power and ground to a halt at turn 11 to become the first and only retirement of the race. The rain that had been threatening to arrive all afternoon finally intensified for the last couple of minutes but too late to make any impact on the final order.

Leclerc baffled by Ferrari hard tyre choice: 'It lost us the race!'