Red Bull driver Max Verstappen has given himself the best possible opportunity of sealing the 2023 world championship this weekend by clinching pole for the Japanese Grand Prix at Suzuka International Racing Course.

But it was tighter at the top than many had been expecting in qualifying, with Ferrari's Charles Leclerc a mere one hundredth of a second from thwarting Verstappen, and Carlos Sainz just a fraction further back in third place.

Sergio Perez was someway behind in fourth which put him just ahead of Esteban Ocon after another strong showing for Alpine. He will share the third row with Lewis Hamilton as Mercedes struggled for pace in the dry, warmer conditions of Saturday.

Suzuka had been transformed on Saturday, the cold and wet conditions on Friday having been swept aside for brighter, drier weather that had been much more to the liking of the teams in final practice, although the clouds had filled in somewhat since FP3. It meant a rather leaden sky for qualifying in the afternoon but with no chance of rain, as F1 got back on track after several hours dominated by breaking driver news. 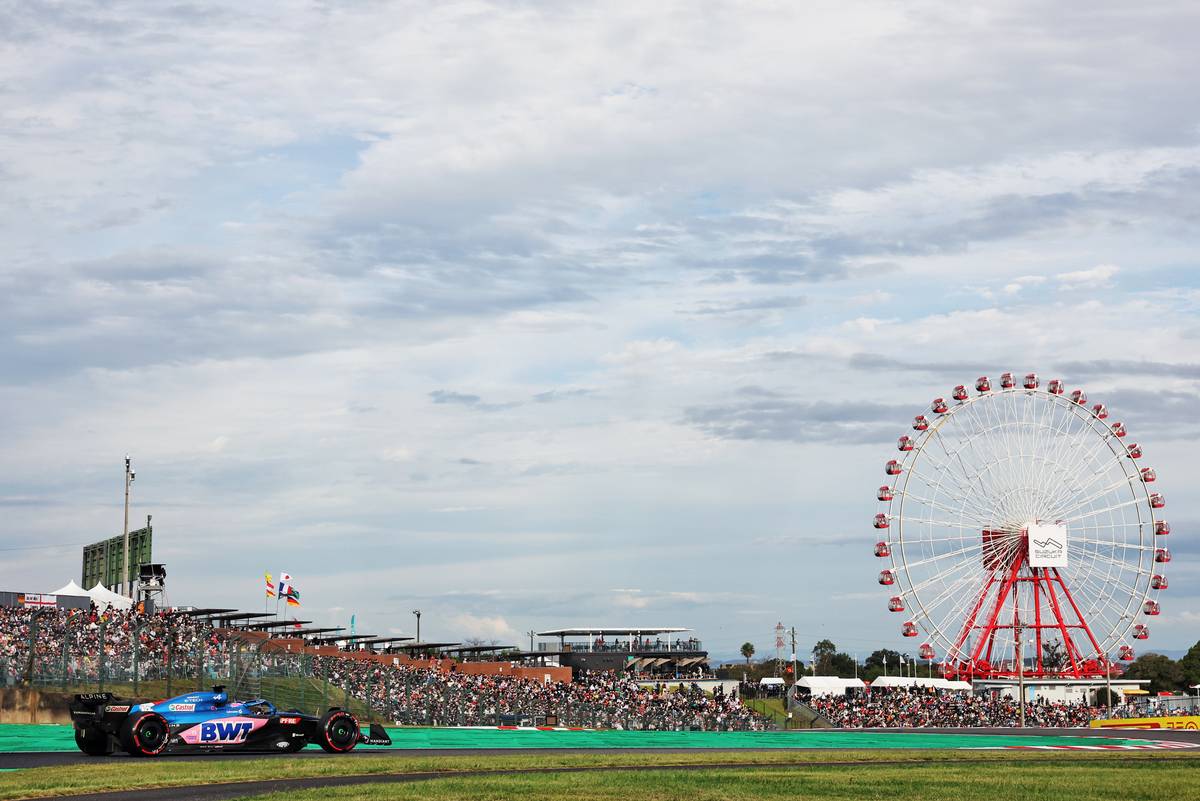 Q1: Verstappen ahead of Sainz and Leclerc as Gasly, Magnussen and Stroll miss the cut

First out on track was Williams' Nicholas Latifi, closely followed by the two AlphaTauri drivers Yuki Tsunoda and Pierre Gasly who had been struggling for pace this weekend with persistent brake issues. Tsunoda was the local hero but Gasly was man of the moment after the announcement of his forthcoming move to Alpine in 2023, with Nyck de Vries confirmed as replacing him at Faenza.

Tsunoda topped the initial times with a lap of 1:31.631s on soft tyres which was four tenths quicker than Gasly, while Latifi came back in without setting a time after completing a sighting lap. It meant Lando Norris was next to set a time: was two tenths faster than the Japanese driver, while the two Mercedes drivers were slower on their first run on mediums. Then it was the turn of Red Bull to take charge, Max Verstappen immediately on top with an initial offering of 1:30.224s which was four tenths quicker than Sergio Perez could manage.

Ferrari pair Carlos Sainz and Charles Leclerc soon split the two Bulls for second and third place respectively. Daniel Ricciardo put in a fast lap to go fifth in the McLaren and he was within seven tenths of Verstappen, putting him ahead of Valtteri Bottas in the Alfa Romeo. Also looking quick were the Alpine cars with Fernando Alonso next to make his Q1 bow in fourth ahead of Perez, and Esteban Ocon tucking in just behind Ricciardo as the track got quicker by the minute with more rubber getting laid down after having been washed clean on Friday.

With five minutes remaining, Alex Albon was the only driver without a time on the board after his initial run had been deleted for exceeding track limits. There was still time to go again, and everyone was soon back out on track including Mercedes who had now switched to softs after Hamilton's earlier time had seen him back up into the drop zone. Even now they weren't exactly swift: Russell improved to sixth while Hamilton could only manage eighth, putting them in the thick of the McLaren/Alpine battle.

That left Mick Schumacher on the bubble in his rebuilt Haas, with Zhou Guanyu, Kevin Magnussen, Sebastian Vettel in the elimination zone along with Latifi and Albon. Latifi's final run put him up to 14th but he was soon pushed back into danger zone by a flurry of improved laps from Schumacher and Vettel. Albon did finally set a time but it was half a tenth short of making the cut, meaning that he was out of qualifying along with Gasly, Magnussen, Latifi and Lance Stroll. 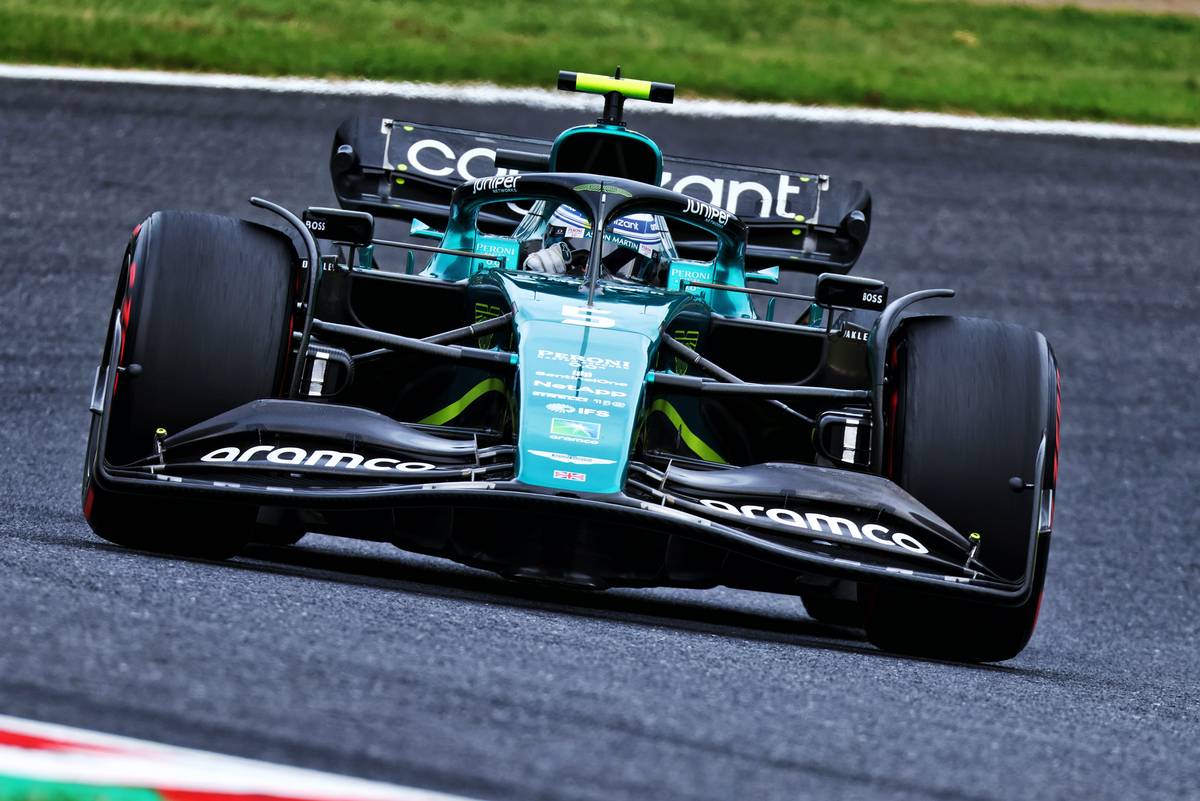 This time it was the turn of the Ferrari drivers to head out first, taking used sets of soft tyres to put in an early banker lap with Sainz' 1:30.444s a tenth slower than his first round time and Leclerc a fraction behind in second. The rest of the remaining cars soon got going, Perez leading the pack but not able to match the Ferraris. Verstappen certainly was, going top by a tenth. The Alpines of Ocon and Alonso then powered their way into fourth and fifth, but were promptly split by Hamilton.

Another good lap from Ricciardo saw the McLaren pip Hamilton by a couple of hundredths, while Russell was worryingly far back in ninth putting him close to the Q2 cut-off line. Those actually in the drop zone after their first runs were Norris, Vettel, Zhou, Schumacher and Tsunoda.

After a brief respite on pit lane, everyone was out again for one last bid to make it into the top ten pole shoot-out with only Verstappen, Sainz and Leclerc feeling confident enough to stay put in the garage. Vettel was first to cross the line to set off for a last flying lap, with Ocon next to start an effort. Both found gold: Vettel was boosted to fifth, and then Ocon took up second place behind Verstappen. Perez was out on track and also going faster, and his time of 1:29.925s was good enough to take overall charge by more than four tenths.

Alonso was still swift and moved into second with Ocon now fourth. The Mercedes drivers finally reacted to the danger of elimination, Hamilton digging deep for fifth ahead of Sainz, and Russell snatching seventh ahead of Norris and Leclerc. A lock-up for Ricciardo meant that Vettel just succeeded in pipping the second McLaren to the final place in Q3 by 0.003s, with Bottas, Tsunoda, Zhou and Schumacher also failing to make the mark. 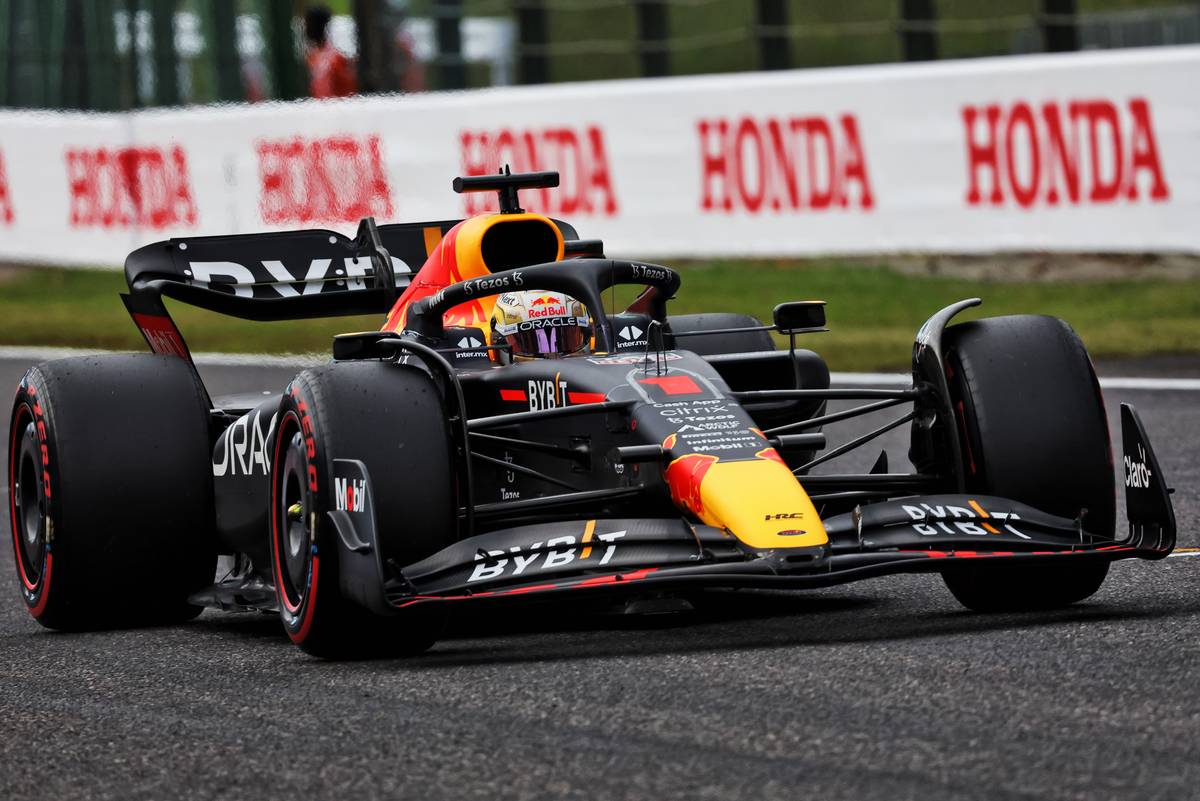 Q3: Verstappen hangs on to crucial pole as Leclerc and Sainz come up just short

Although he hadn't topped Q2 after passing on making a second run, Max Verstappen was now clearly the favourite to take pole - and put himself in prime position for tomorrow's race and the perfect opportunity to seal his second world championship title.

Perez took point and led the charge out of pit lane, with Leclerc right behind. Only Vettel bided his time waiting for a single run an empty track. Most were on fresh sets of softs, but Ocon, Hamilton and Russell all opted for used tyres to start with. Leclerc passed Perez to claim the clear air at the front and powered his way to a time of 1:29.557s, four tenths quicker than Perez; Verstappen then found an additional quarter of a second to go top with a time of 1:29.304s. Sainz was third fastest ahead of Perez, followed by Alonso, Russell, Hamilton, Norris and Ocon, with Vettel subsequently showing in sixth ahead of the two Mercedes.

The stewards' attention had been caught by an incident between Verstappen and Norris on the out lap: Norris had been closing up on the dawdling Red Bull when Verstappen tried getting up to speed only to lose the rear when the back end of the RB18 kicked out at turn 15. It prompted Norris to take avoiding action and go onto the grass, the dirty tyres then compromising the first sector of his flying lap. Verstappen waved an apology to Norris as they returned to pit lane after their push laps, even as the officials noted it for further investigation after the session.

After a brief return to pit lane, Leclerc put everything into his final lap but it proved to be 0.01s slower than Verstappen's existing time. Neither Sainz nor Perez could find any more time, and even Verstappen himself was unable to improve further after a scrappy effort that saw him lose a chunk of bodywork on the kerbing. Not that it mattered - he had clinched his fifth pole of the season, and was in the ideal spot from which to seize the title on Sunday.

Behind the top four, Ocon secured P5 putting him alongside Hamilton on the grid, and their team mates Alonso and Russell lined up in formation behind them leaving Vettel set to start from ninth alongside Norris.