Jenson Button says he is excited about the size of the step forward McLaren can make at the start of the European season.

McLaren has made consistent progress since the start of the year, with the team fighting for a spot in Q2 in China before both cars finished after a more competitive race. With this weekend's Bahrain Grand Prix coming so soon after the last race, Button admits a further step forward will be difficult but the following race in Spain should see a major improvement.

"The positive for us here is that we are pretty good at looking after rear tyres," Button said. "You need that around here. Whether that is enough to move us forward I am not quite sure. I think the bigger and more interesting step for us is when we get back to Europe from here, but it is still an important weekend. There is a lot of information we can gain and learn from the car and engine."

While Button also wants more downforce from the MP4-30 as well as more power, he says an upgrade to the Honda power unit due at the start of the European season could see the team catapulted further up the competitive order.

"Yes, it is a lot more consistent. There are still a few issues that we need to sort out with the rear wing, which we have hopefully solved for here. I think a lot of people had issues with the rear wing, I don’t know if it was a pressure issue in China or what ... but hopefully the issues will be resolved here.

"It is definitely a more driveable car, but I think it proves we just don’t have enough downforce the way the car is – it just feels like a lack of downforce at the moment. But we are still in a reasonably good position and when we find more pace with the power unit in Barcelona, I think we will find ourselves jump up the grid quite a bit. That is what we are hoping, anyway." 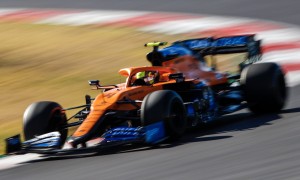