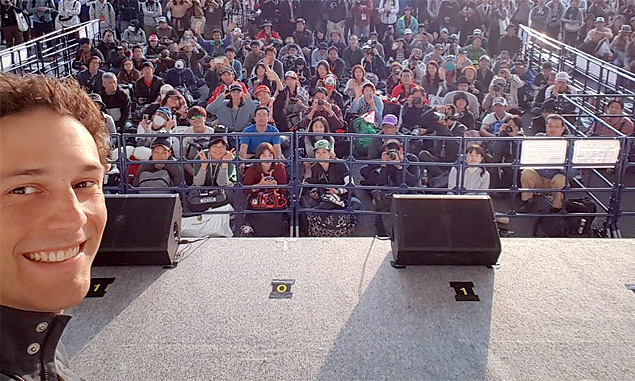 Former Formula One driver Bruno Senna has been celebrating his 33rd birthday today in Japan with this selfie against a backdrop of race fans in Fuji, where he's competing in this weekend's round of the FIA World Endurance Championship.

Along with his RGR Sport by Morand team mates Filipe Albuquerque and Ricardo González, Senna is currently running in second place in the WEC LMP2 category with three rounds (at Fuji, Shanghai and Bahrain) remaining.

Having made his way up through the ranks in Formula BMW UK, British Formula Three and GP2, Senna made his Formula One début in 2010 with the Hispania Racing F1 Team (HRT). The following year he became a test and reserve driver for the Renault team and he eventually took over the race seat from Nick Heidfeld for the final five races of the season which led to a full season at Williams alongside Pastor Maldonado. In total, Senna made 46 Grand Prix before bowing out of Formula One at the end of 2012.

Not that he's been putting his feet up. As well as taking up a media pundit role with Sky Sports, Senna has continued to race in the WEC (including four outings at Le Mans in the LMP1, LMP2 and GTE-Pro classes) and has also completed two full seasons of competition in the FIA's Formula E championship with Mahindra Racing.