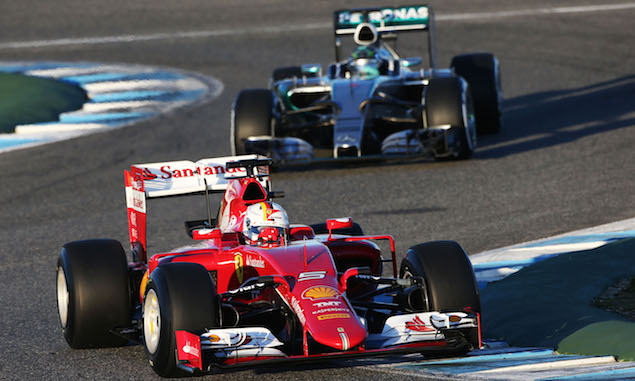 Sebastian Vettel set the fastest time of the first day of testing in Jerez but it was Mercedes which looked ominously strong ahead of the 2015 season.

The Mercedes was straight out on track - as it was at the start of its dominant 2014 campaign - and Nico Rosberg barely returned to the pits during the day as he completed over 150 laps in the W06. The new car was officially launched in the pit lane before the day started, with Paddy Lowe warning Mercedes not to get complacent following its success last year, but there were no signs of the team resting on its laurels as Rosberg carried out numerous long runs including a 40-lap stint at one stage.

Vettel usurped Rosberg at the top of the times later in the afternoon as he enjoyed an encouraging first day testing for Ferrari, completing 59 laps in the SF15-T with a best time of 1:22.620. Having been first out on track - passing Rosberg at the end of the pit lane as the light went green at 0900 - Vettel had a disjointed morning while the Mercedes notched up the early mileage before Ferrari spent more time on track in the afternoon.

The Spanish fans who had become used to cheering for a Ferrari driven by Fernando Alonso were left frustrated as McLaren was hampered by reliability issues. The car wasn’t ready to head out at the start of the day and managed just six laps - with a best time some 18s off the pace - before returning to the garage where it stayed for the rest of the day.

Admittedly, Alonso had previously said he was prepared for problems during testing as McLaren reunites with Honda for the new season, but it will have been difficult for the double world champion to watch Vettel top the times and Mercedes already look bulletproof.

Marcus Ericsson ended the day sandwiched between the Ferrari and the Mercedes as he set a time just 0.157s slower than Vettel in the Sauber C34. A productive morning gave way to quicker lap times in the afternoon, but he did cause an early red flag due to a spin at Turn 1. The car remained a handful all day too, with numerous lock-ups and a big save required as the Sauber got out of shape entering the back straight.

Red Bull finally launched the RB11 in a striking testing livery, with the camouflaged car rolling out early in the day. Having reached 22 laps - one more than the team’s total from Jerez last year - Ricciardo returned to the pits with smoke pouring out the back of the car. Red Bull fixed the issue in the afternoon, but still only added 13 more laps to its total as it finished with the second lowest lap count after McLaren.

Williams was another team to enjoy a productive day as Valtteri Bottas completed 73 laps with a best time 1.3s off the pace. The new car was presented in the pit lane before the start of running but wasn't ready to emerge until later in the day. Carlos Sainz Jr was sixth quickest - ahead of Alonso - in the Toro Rosso but stopped on the back straight late in the day to cause the second and final red flag.

Lotus failed to run on the opening day, with the E23 only landing in Spain on Sunday. 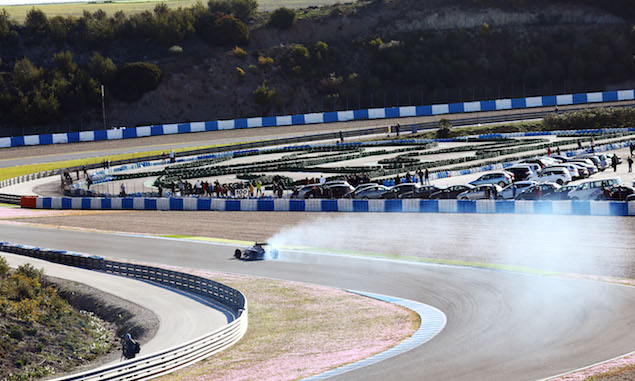 Ricciardo hit trouble in the RB11