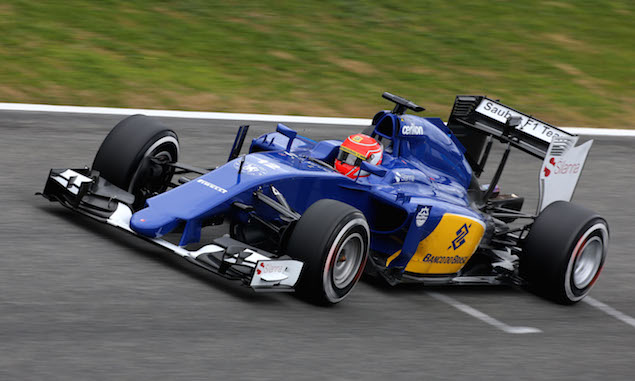 Felipe Nasr set the fastest time of the third day of testing at Jerez as Ferrari continued to feature at the top of the standings.

With Sauber having been second quickest to Sebastian Vettel on the opening two days of pre-season testing, Nasr was quickest on Tuesday after setting a 1:21.545 on his second consecutive day in the car. While the headline time can’t be overly analysed, Nasr told F1i that the strength of the whole package at the first test had pleasantly surprised him.

It was another consistent day for the Ferrari-powered teams, with Kimi Raikkonen ending his first day in the SF15-T second quickest. Raikkonen’s time of 1:21.750 was almost 0.8s slower than Vettel’s best of the week so far, but came on a day when Ferrari completed 92 laps - the team’s highest total of the test to date - as the new power unit showed strong reliability.

Nico Rosberg was third quickest and managed to complete another 151 laps despite causing a red flag halfway through the day. Rosberg crawled to a halt at Turn 10 and Mercedes found that the engine had shut itself down, but the car was ready to return to the track soon after the stoppage and once again completed the most mileage of any team.

Rosberg was the cause for the second of three red flags, with pacesetter Nasr spinning in to the gravel at Turn 9 after an hour and a half of running. Nasr was on slick tyres at the time, with the third day having started on a damp track requiring intermediates.

Fourth fastest was Felipe Massa on his first day in the new FW37, completing 71 laps and setting a best time just over 0.7s slower than former Williams reserve Nasr.

The Mercedes-powered teams were all grouped together, as Lotus enjoyed a very productive day following early telemetry issues which confined it to the garage in the morning session. Pastor Maldonado continues in the car for the second consecutive day and completed 96 laps and was just 1.1s off the pace. However, Maldonado brought out the third red flags with just two minutes remaining when he stopped on the back straight.

Carlos Sainz Jr was one of three drivers to break the 100-lap barrier as Toro Rosso put mileage on the STR10. After Max Verstappen got the opportunity to run on intermediates late on Monday, Sainz Jr was able to follow suit in the first hour of the day before some long runs later on.

Toro Rosso’s lap count was even more significant as the only team other than Red Bull running a Renault power unit. Following limited mileage on the first two days, Red Bull again hit trouble as the RB11 required a power unit change after just five laps, limiting Daniel Ricciardo to 48 laps in total.

While 2.3s separated the top seven cars, it was another tough day for McLaren-Honda. After an encouraging start, Fernando Alonso returned to the pits after 32 laps with a loss of cooling water pressure which required the new power unit to be removed and ended the team’s day with three hours still to run.

A closer look at the SF15-T