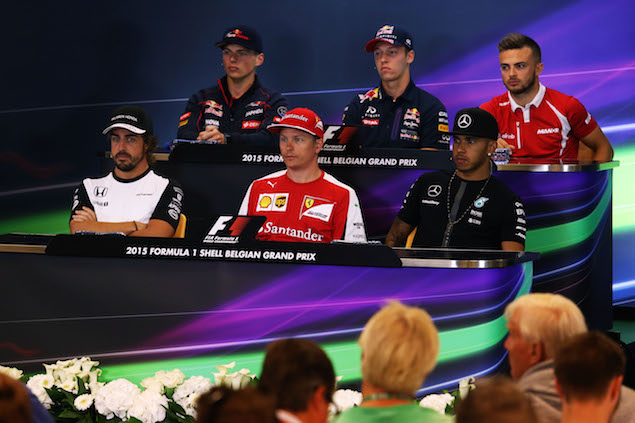 The Question: Kimi, we have to start with you. Obviously Spa has been very good to you over the years – four wins – but your drive for 2016 confirmed yesterday. What do you hope to achieve given the way the team is developing at the moment and your own performance level at this stage of your career?

KR: Well, obviously it the same as every year – we want to do as well as we can and hopefully challenge for championships for next year and I’m sure we can produce even a quite bit better car than this year next year. Obviously the team is all working well together and we all feel very good and obviously I’m happy to stay there but we have to try to do a good second part of the year and maximise what we have and then prepare for next year.

KR: Well, the first thing I hope to achieve is making my bank manager very happy. Actually that’s not the first thing, the first thing is making myself very happy and I think I’ve done that. Looking at my performance level, I will admit, that it is probably not at quite the same level it was in 2010. After all, in that year I managed to get Ferrari to pay me for not driving the car. I regard this contract negotiation, in which I will still have to race, as a bit of a setback from that kind of performance but I’m sure I can do better in the future.