Catch up with what the teams had to say following the sixth race of the 2017 season, the Monaco Grand Prix in Monte Carlo. 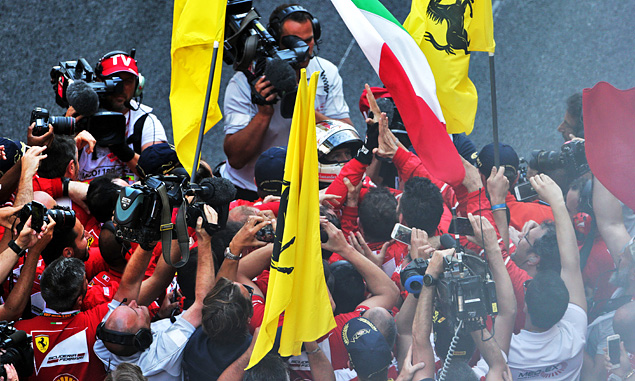 Sebastian Vettel
"It's an incredible day. In the laps before my pit-stop I was surprised by my own pace because earlier on Kimi and I were both struggling with the rear tires. Those laps I did today were comparatively better than the ones I did in qualifying yesterday. It was impossible for me to predict how fast I could go today. At one point I thought a second, maybe half a second, but then it turned out it was more than that, which was obviously crucial to grant me first place out of the box. It was fantastic to be in the lead and win the race. There was a lot of adrenaline during those laps but in general I could control the race. It sure helps to be the leading car, without any traffic, so that you get better into the rhythm. Once I had new tires, again I was able to control the position. We had the chance this weekend to finish first and second and that's what the team did. It's great to see what we were able to do. Today the team gained a lot of points. It's been a while since Ferrari won here so it's a great day. I really enjoyed driving for the team. It is great to work together, we try to push each other and the best thing is to see that the team keeps growing."

Kimi Raikkonen
"To finish first and second is what we wanted, a very good result for the whole team. Obviously right now I'm not very happy, because second place is not what I was looking for, but that's how it goes. When you have done most of the hard work and you finish second it's not bad, but we expected a bit more. When I came out after the pit stop I got stuck behind lapped cars and that was not ideal, but this was out of my control. At the next track in Canada the layout is completely different from here: it's hard to predict what will happen, but let's see."

Maurizio Arrivabene, Team Principal
"Today's one-two is a great result for the entire team, on a track that highlights the qualities of the car and the person driving it. Both our drivers performed like champions. Starting from pole, Kimi led the race up until his pit stop, which took place on the planned lap. Seb stayed out for a few more laps to cover Ricciardo. Vettel's times were exceptional on Ultrasofts that had done a lot of laps, which confirms the quality of the Pirelli product. As for Kimi, unfortunately he lost a bit too much time behind a backmarker. The most important aspect of today is that all the hard work carried out by the guys at the track was rewarded, as was the fact that our car was so well conceived back in Maranello. Now, it's already time for us to think of the forthcoming Grand Prix in Canada."

Mattia Binotto, Chief Technical Officer
"Today's result was built on the front row we secured yesterday in qualifying. It shows that the SF70H was well suited to all the conditions we encountered over the weekend at a circuit that requires maximum aerodynamic downforce. But in fact, we can claim that, so far, our car has behaved very well on all types of track. Now we look ahead, one step at a time, aware of the importance of upcoming developments."