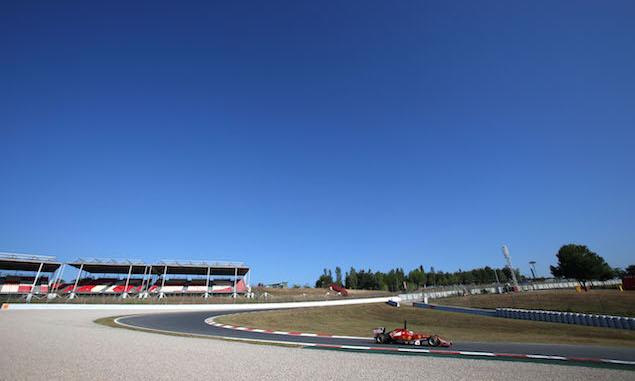 The second pre-season test gets underway at the Circuit de Catalunya near Barcelona tomorrow, the first of back-to-back tests at the circuit.

The first test saw McLaren struggle for mileage with the MP4-30, with Jenson Button and Fernando Alonso completing six laps each on the opening two days. Button will hope a similar pattern doesn't emerge at the second test as he drives on Thursday and Friday before handing over to Alonso for the weekend.

Mercedes again alternates drivers - this time with Lewis Hamilton driving first - as it looks to build on an impressive amount of mileage at the first test at Jerez.

While Mercedes was reliable, Ferrari was quick during the first four days and the SF15-T will be the focus of much attention to see if it continues the encouraging form it showed throughout the first test.

Force India will join the action for the first time in 2015, but it will be running last year's car to carry out tyre testing as the VJM08 is not yet ready. The Silverstone-based team has just confirmed that Mercedes reserve driver Pascal Wehrlein will drive for two of the four days, with the 20-year-old DTM race winner scheduled on Thursday and Saturday. Regular drivers Sergio Perez and Nico Hulkenberg will take on testing duties on Friday and Sunday respectively.

There are two drivers confirmed to be running who weren't on track at Jerez. One is Williams' Susie Wolff, who will open the test in the FW37, while third driver Jolyon Palmer also gets his first drive at Lotus.

Feature - F1 testing: The tip of the iceberg

What’s the purpose of pre-season testing? (1/2)