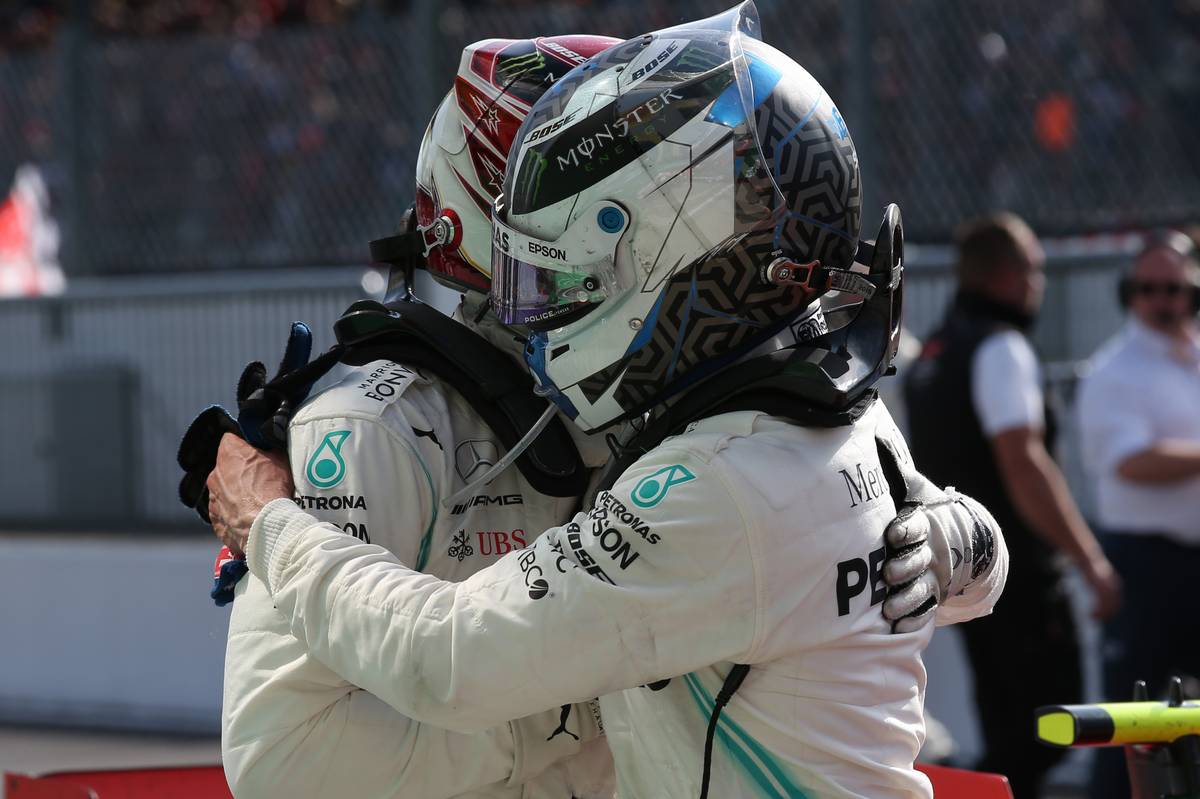 Valtteri Bottas
"I was trying everything to get close enough to Charles to make a move on him in the final laps, but the Ferraris were very quick on the straights this weekend, so it was difficult to get close enough. I was pushing as hard as I could, but every time I got really close, I started to lock-ups the fronts. While it's disappointing that we didn't win, our performance today was actually quite promising. We came to Monza expecting this to be one of the most difficult races of the season for us, but we could really challenge the Ferraris, so that's good to see. It was a good race overall from that perspective and I think we can leave Italy with a positive feeling. On paper, the upcoming races should play a little more towards our strengths and I'm looking forward to a good fight with Ferrari and Red Bull over the next weeks."

Lewis Hamilton
"Congratulations to Charles today, he did a great job, especially considering the pressure Valtteri and I were putting on him. The Ferrari was very quick in a straight line, so it was difficult to stay close to them. I think it just wasn't our day today, it's always disappointing to follow another car so closely but not be able to take the lead. But in the end, we're leaving Italy with more points in the Constructors' Championship and ultimately that is what matters. I'm not looking to the next race thinking it will be easy for us; instead we're going to go to the factory next week and go through the same process, looking for ways to improve our car, improve our processes over a race weekend, and I hope that I can do a better job in Singapore. I personally cherish this battle between Ferrari, Red Bull and us, so I want it to continue."

Toto Wolff, head of Mercedes-Benz motorsport
"First of all, congratulations to Charles, he drove a strong race and overall Ferrari had the strongest package this weekend. We threw everything at them today and as I said before the race, if you gave me second and third in Monza, I would have taken it. Of course, we wanted to win but you can see how happy the Tifosi are about the first Ferrari victory here in a while. Spa and Monza turned out to be as difficult for us as we expected, but we still achieved solid results and come away with a good batch of points heading into the flyaways, extending our lead in both championships. Singapore is up next, and we should be strong there, but so should Red Bull. We are looking forward to showing what we can do in the upcoming races."

Andrew Shovlin, chief race engineer
"It's frustrating that we managed to spend almost the entire race with a car right behind Charles today and failed to find a way to get through but that is sometimes the way it goes. We had to try and undercut with Lewis when a gap appeared behind the Renaults but with the low degradation here, it's not as powerful as at some other tracks. Lewis made a good move into Turn four, but Charles defended aggressively and realistically, that was Lewis's best chance to win. Lewis pushed the tyres hard for most of that stint, so it wasn't a surprise when they started to drop off at the end. We were able to send Valtteri long to build an offset in tyre life, but it wasn't enough to give us the speed to pass and after that we didn't have anything else to try. We know where we need to work; our qualifying pace has dropped from where we were at the start of the season and we need more speed in a straight line. We've known that for some time now but having weekends like the two we have just had will motivate everyone in Brackley and Brixworth to get on top of these weaknesses. It's Singapore next which is a very different challenge to this place, and it is also a tricky circuit to get right but we are hungry to get back to winning so will be working hard this week to make sure we can arrive in the best possible shape."