Eric Silbermann reflects on a busy start to December following the end of the F1 season, with a familiar name proving to be the centre of attention... 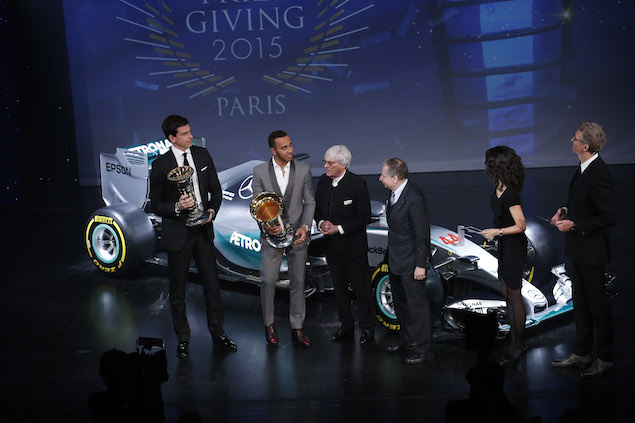 Time was the F1 and other racing seasons ended at the end of October, thus allowing for a decent pause, enough time to lose your Adelaide tan, long enough to forget how much you loathed most of the people you worked with, before it was time to dust off the DJ or the LBD and head off into the night for yet another awards ceremony.

Yet this year, after the Abu Dhabi GP I managed just one night in my own bed before I was Eurostaring it to Paris for a week of work leading up to the FIA Prize Giving last Friday. It took place at the Lido de Paris, a theatre famous for its burlesque (read topless) show. As the audience was made up mainly of motor sport dignitaries and some very self-important people, you could say that for one night only, there were more tits in the audience than on stage, but that would be unkind, wouldn't it?

Anyway, whereas the Autosport Awards held two nights later in London is a convivial affair with plenty of laughter on and off stage and a killer after-party, the FIA bash is, in every sense of the word, a more sober affair, this year especially and understandably so, because of recent events in Paris.

However, the FIA has one major trick up its sleeve when it comes to ensuring the stars show up: aware that attending an event after a long and tiring race season in locations as charming as India (2011,) or Qatar (2014,) is about as appealing as clipping your toenails with garden shears, the FIA regulations for its major championships state that the winning driver and indeed the top three drivers when it comes to the biggest series, must attend the shindig. To this day, I’m convinced Fernando Alonso made sure he mysteriously lost his third place finish in the 2011 Brazilian Grand Prix to ensure that Mark Webber, the winner that day, beat him to third place in the Drivers’ Championship by a single point. The Aussie had to make the trip to New Delhi while the Spaniard…did whatever the heck he wanted to do. 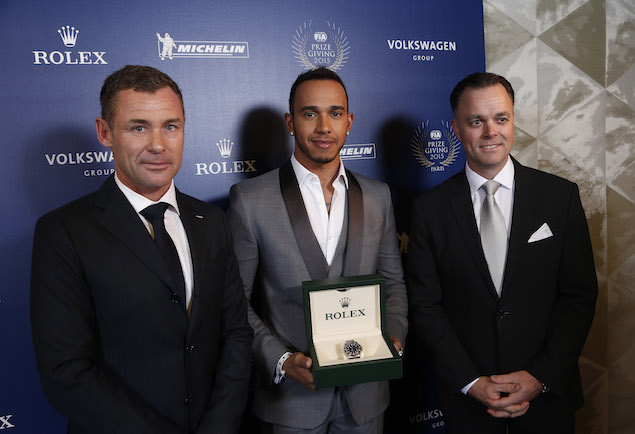 Titles and time caught up with Webber this year when he again had to show his face, having won the WEC title, but he didn’t look too unhappy to be there. Lewis Hamilton on the other hand was clearly suffering from titleitis and although he dutifully went through the tedium of the pre-dinner TV interviews, for FOM and others, you could tell that underneath the perma-smile he’d had enough of being the centre of attention. He even smiled when presented with a Rolex – only the truly rich get truly expensive freebies – because it was all on the job list. The Rolex might have to go as the Merc boys are contractually obliged to wear IWC on their wrists, so someone close to Lewis is in for a nice Christmas present.

It was at this point that Lewis showed great initiative, the sort of quick thinking that befits a world champion, the speed of decision-making that can see you barge your team-mate off the track at the first corner. Faced with the prospect of a long dinner sitting next to the FIA president and a table of worthies all on their best behaviour, he did what any young man might do during a night out in Paris, he shot out the building and headed for a nearby restaurant with his mate. Rumour has it the FIA F1 media delegate eventually tracked him down in La Maison des Arches Dorées (or Golden Arches as we say in English) and the triple champ returned to the venue to receive his award. He was on stage alongside his boss Toto Wolff, who would have us believe that he might be forced to dismiss one of his drivers if they don’t stop bickering.

Sadly, we live in a world where everyone has to be on the same page and a comment about a colleague is deemed defamatory even if it’s constructive. Feuding team-mates make for fast team-mates: just ask Ron Dennis if he’d have considered getting rid of Prost or Senna, or ask Patrick Head or Frank Williams if they’d toyed with the idea of telling Piquet to stop being so nasty about Mansell. If team-mates don’t, at the very least, mistrust one another, then someone isn’t trying hard enough. My take on it is that Wolff realises there are only a few days left of 2015 and if he wants to keep his Austrian passport he needs to prove to the Immigration people in Vienna that he can match Messrs. Lauda, Mateschitz and Marko in the loony comment stakes.

A day in Paris and Lewis was back to the USA to attend the Kennedy Center Honors event, as well as a Raptors v Lakers NBA game, while finding time to congratulate his dog Roscoe for winning GQ magazine’s “Dog of the Year” award, complete with cover photo! Elsewhere on social media you could find the triple champ rapping while standing on the ruby red wing of his private jet, looking cool in a Houndstooth jacket or rather drunk in a video clip, with an even drunker Niki Lauda telling Lewis that he screwed up the end of his season.

In my book, that’s pretty radical behaviour for a sports star in 2015 and Hamilton deserves the credit for, admittedly unwittingly, doing a great job of promoting Formula 1 across the world. But according to Bernie Ecclestone, the Englishman’s Mercedes team is making F1 boring and he wants Sebastian Vettel to win for Ferrari next year. This is the same Ecclestone who used to claim Ferrari was making the sport boring when Schumacher was in his pomp and also accused Vettel of being a dull World Champion when he took four titles on the bounce with Red Bull. 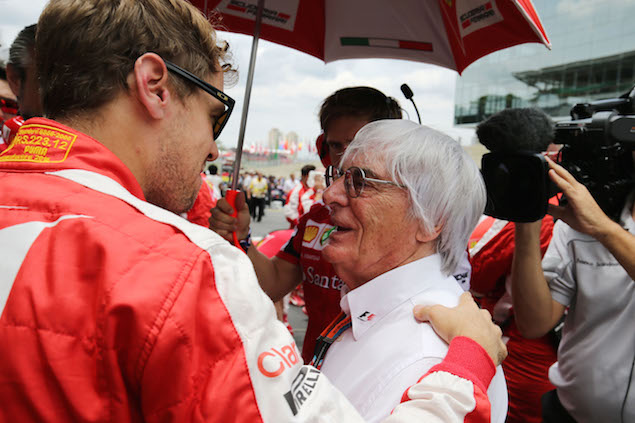 For once I’d have to agree with Bernie on the Vettel thing, because while you have to respect what the lad can do behind the wheel, behind the scenes the sport gets next to nothing from him. At some point, F1 drivers have to do more than just drive, sign a few autographs and attend sponsor functions. It’s the fans that make sportsmen and women into heroes and the price the stars ought to pay for the millions they get in return is to let the fans into their lives; not intrusively, but enough to show they care. I can understand the need to respect people’s privacy, but when earlier this year Seb’s press officer told me she couldn’t comment, when I casually remarked it was nice for Vettel that he’d become a dad for the second time, then maybe privacy is quite simply paranoia. At the moment though, Lewis is in a class of one, which is why he receives so many column inches (sorry @GrandPrixDiary) and maybe explains why an eighteen year old kid without a single F1 podium finish to his name was voted FIA Personality of the Year. That’s great for Max Verstappen, but it doesn’t say much for our sport.

And returning to my opening paragraph for a moment, I’m sorry if the idea of me in a LBD has just put you off your tea…

Lewis Hamilton: Timing is everything