With the 2015 season drawing to a close in Abu Dhabi, teams were already busy laying the foundation for next year. F1i technical expert Nicolas Carpentiers provides you with images and explanations of the updates on display at Yas Marina Circuit. 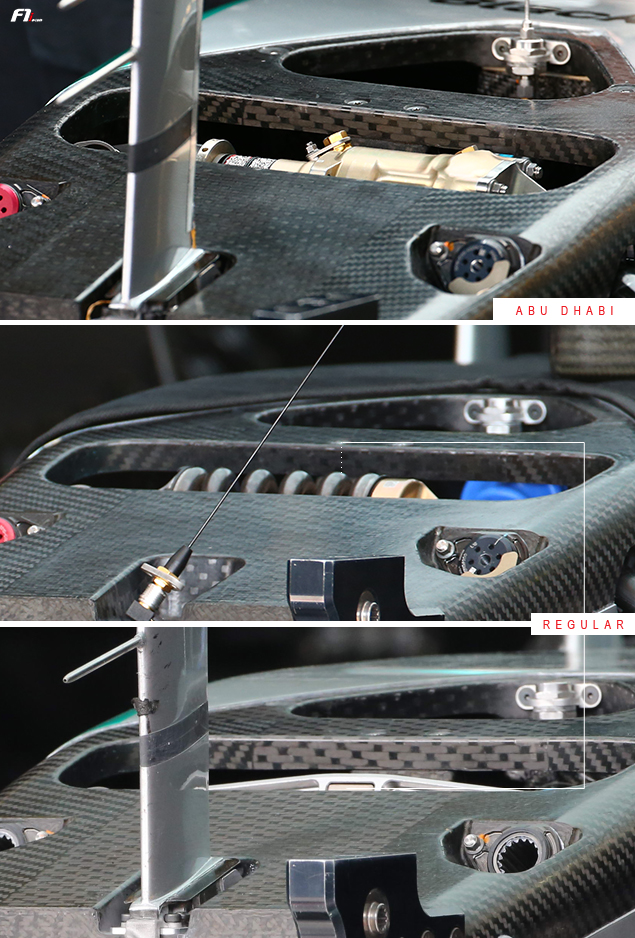 DOMINANT MERCEDES DOES NOT SUSPEND ITS EFFORTS

Mercedes has once again enjoyed a comfortable edge at the front this year, but this does not mean the double world champions have taken their foot off the gas in terms of development, especially with 2016 already fast approaching. After trialling what looked like an “S” duct system in Brazil, executive director (technical) Paddy Lowe and his team sampled a hydraulic heave damper in Abu Dhabi, which replaced the usual two-element setup that includes a recoil spring and hydraulic damper (the latter slots in behind the former, as shown by the dotted line on the pictures above).

While front-and-rear interconnected suspension (FRIC) has been banned since the 2014 German Grand Prix, teams have carried on using the same complex suspension systems to keep the front of the car as close to the ground as possible. They have just ensured that the front and rear are no longer connected.

The hydraulic element that was tested on the W06 in Friday free practice fits within this broader hydraulic system. It frees up some space near the drivers’ feet, which could allow the 2016-spec W07 to be fitted with an “S” duct system. Next year’s front-end design could thus be quite different from what we saw in 2015.