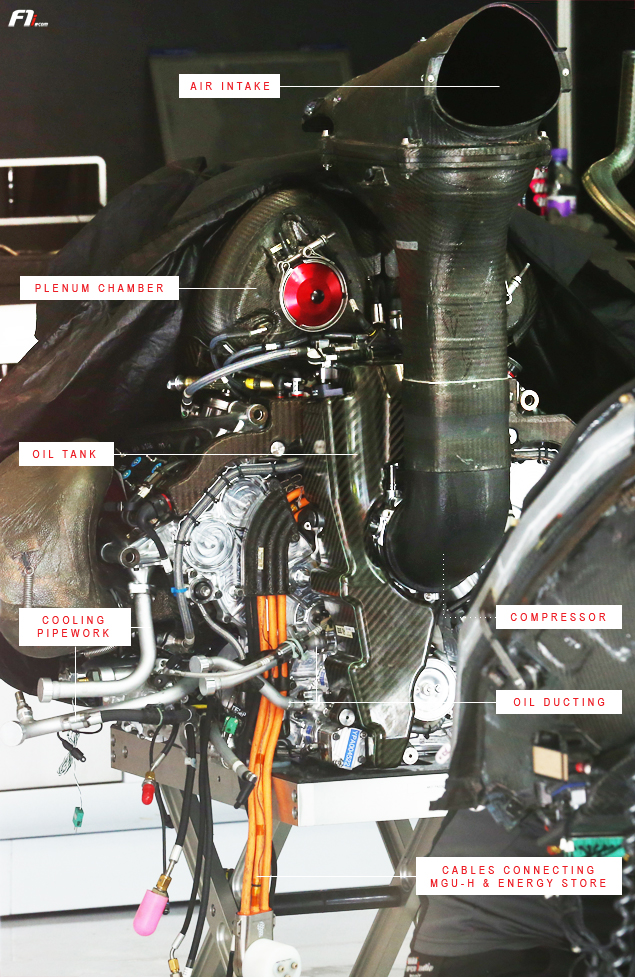 While the compressor and turbine are placed side by side on the Renault and Ferrari power units, Mercedes has kept its original split-turbo setup for the 2015-spec PU106B. The two components are positioned further away from each other than in a more conventional installation. Therefore, the shaft that connects both elements is necessarily much longer, going through the ‘Vee’ of the engine where, incidentally, the MGU-H sits.

As one can see on the picture above, the compressor is placed at the front of the power unit, while the turbine sits at the back. The periscope-shaped air intake drops forwards to the front of the engine and feeds air to the compressor. This installation has forced Mercedes’ engineers to hollow out the oil tank in order to free up some space within the V6. By comparison, Honda, which has also gone for a split-turbo design, has placed the air intake system behind the oil tank.

Mercedes’ fairly unconventional architecture offers three advantages. First, it allows better cooling, since the aluminium-made compressor and its associated pipework are mounted at the front of the V6, namely far from the 1000°C released by the red-hot turbine and exhaust. Thus, the compressor can work with a smaller intercooler (the compressed air requires less cooling).

Another advantage comes from the shorter pipework connecting the compressor to the intercooler, which helps reduce the dreaded “turbo lag”. Therefore, a lesser portion of the energy recovered by the MGU-H is needed to feed the turbine when the throttle is not engaged. In other words, the Mercedes unit would ‘waste’ less energy to maintain the optimum rotational speed of the turbine, and have more at its disposal to boost the engine. The PU106B is also able to charge its battery faster. Unlike Honda-powered pilots for instance, Mercedes-engined drivers can deploy the maximum amount of electric energy allowed per lap, using less fuel as a result.