F1i technical expert Nicolas Carpentiers takes you behind the scenes of Formula One and provides you with exclusive images of this year’s hybrid 1.6-litre V6 turbocharged power units. After Renault, Honda, and Ferrari, the fourth and final chapter in our series is devoted to Mercedes’ dominant PU106B. 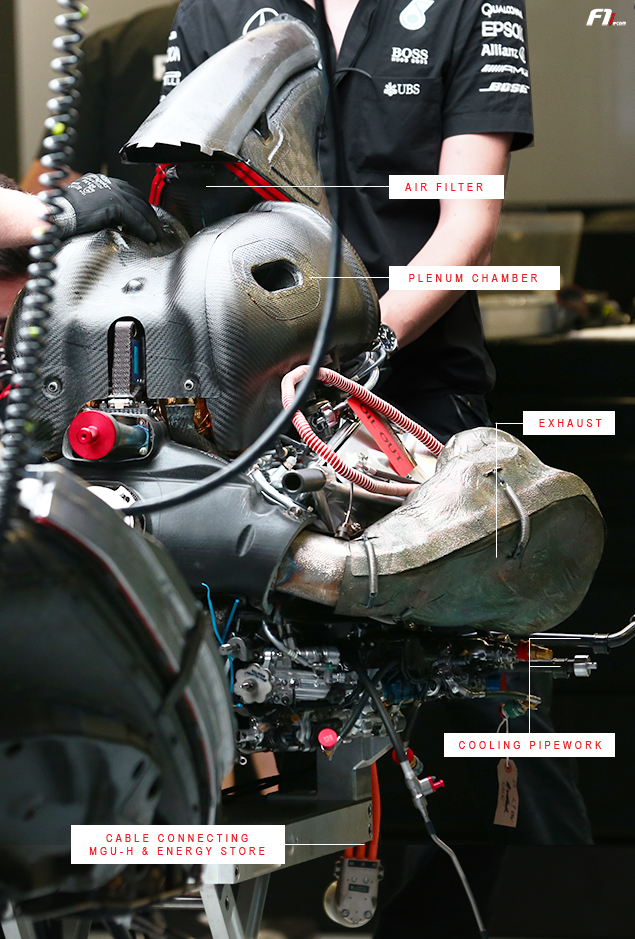 Ever since the introduction in Formula One of the hybrid turbocharged power units in 2014, Mercedes has been occupying centre stage, leaving rival engine manufacturers in its shadow. In two seasons, the German behemoth has claimed 32 wins and 37 pole positions (36 for its works outfit and one for customer team Williams) out of 38 grand prix weekends. That’s total dominance for you.

Under the stewardship of Mercedes power unit boss Andy Cowell, engine engineers working at High Performance Powertrains (HPP) have come up with a clever and efficient design where every component – turbocharged V6 engine, MGU-K and MGU-H, battery, etc. – work in a seamless manner.

“The engine and the ERS are so interlinked, we are constantly debating [where to develop next],” Cowell told Autosport. “Should we increase the crank power, or should we increase the amount of power that we take out of the MGU-H and put into the battery, or to power the MGU-K, because of the flexibility of different energy flows that you've got there?

“All the work around combustion efficiency is very potent, because you've got 1240KW potential in the fuel with it flowing at 100kg/h, so the day we get to 100 per cent conversion efficiency, we will have 1240KW as well as the K. That's our aspiration before we retire.

“We are chasing the high-powered switching efficiency and then the same on the K. And when we store the energy in the battery we are making sure we are not losing a lot of energy there. So all of that really matters, and a lot of the ERS aspect provides tactical opportunity.

“The straight thermal efficiency in the ICE [combustion engine] - that's good old fashioned crank grunt. The combustion chamber and the journey of the air in, and the fuel injection, and the chemistry, and the exhaust system, and its interaction with the turbine - there are many components, many parameters that you are chasing to improve.

“All of those have improved together. One of the bits on its own wouldn't deliver anything, but that bit with the rest has delivered something. It's all beautifully interlinked – the fuel and the combustion process and the task of liberating useful power from this chemical energy.”

Mercedes’ engine dominance spawns from Brixworth’s potent brainpower, but also from its technological edge and early start, with Cowell’s team beginning to work on their hybrid power unit back in 2010. And they have gone for a very specific engine architecture, which remains a distinctive feature to this date.