Sir Stirling Moss' exceptional talent brilliantly produced extraordinary drives during his tenue in motorsport. However, the 1961 Monaco Grand Prix stands out among his achievements. In memory of 'Mr. Motor Racing', F1i travels back to when Britain's F1 legend took his ageing Lotus by the scruff of the neck around the twisty streets of Monte Carlo and defeated a trio of far superior Ferraris at a record breaking speed.

Formula 1 outgrew Monaco ages ago. As Grand Prix racing expanded globally into its sanitised and sheltered environment, the Principality remained firmly entrenched in the realm of a different era, the ultimate jewel in the F1 crown.

Why? Because in Monte Carlo, glamour, history and prestige trump the many inadequacies and absurdities of this "Grande Epreuve" when it comes to racing around its narrow twisted track. But no motor racing purist would want it any differently.

In 1961, Monaco was not only the debut event of the season, it was also the first race run under new regulations, when engine capacity was reduced from 2.5 to 1.5 litres in an effort to slow the speed of the cars, cut costs and encourage other car manufacturers into joining Formula 1 (doesn't that sound familiar…?). 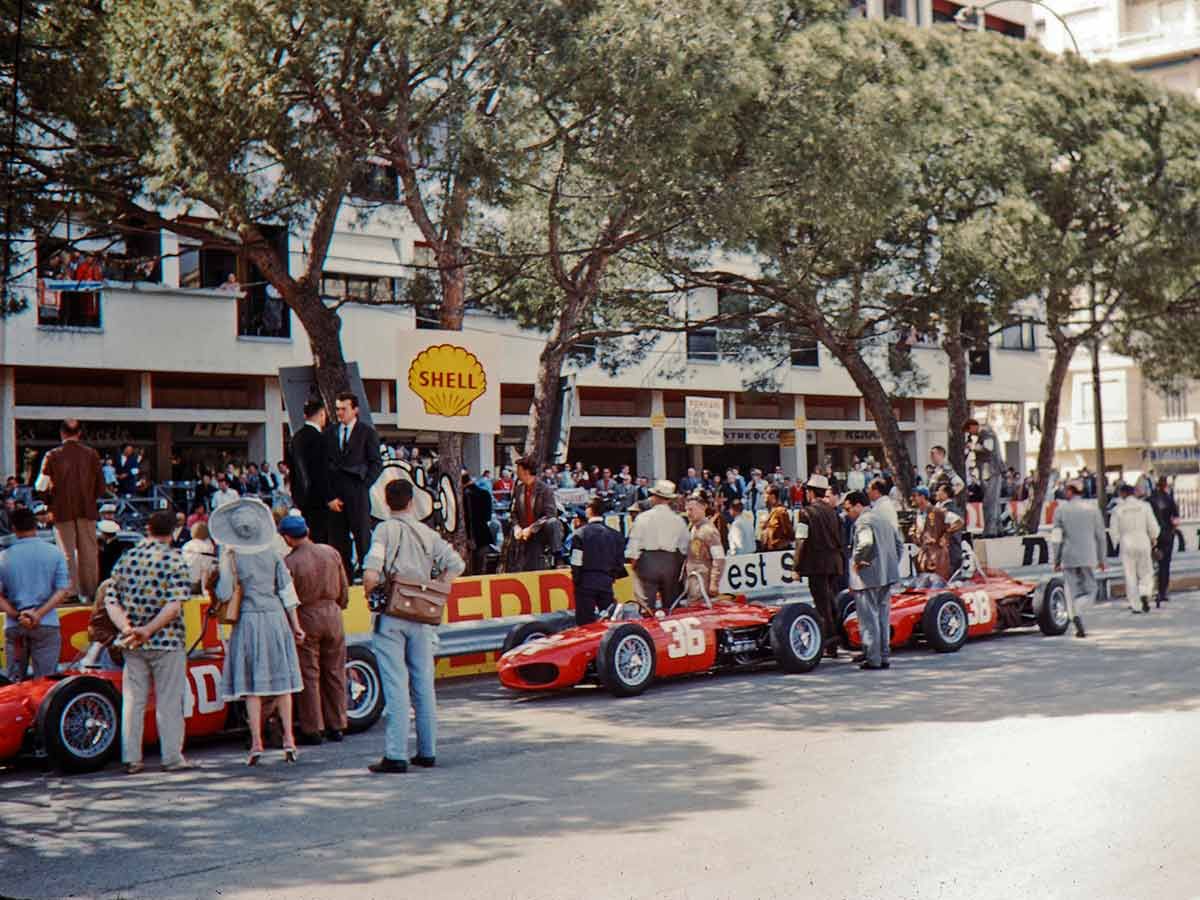 Ferrari in particular appeared to have made the most of the new rules, joining the rear-engine revolution back then with its brand new V6-powered 156 "Sharknose" entrusted to works drivers Phil Hill, Richie Ginther and Wolfgang Von Trips. Qualifying however saw Stirling Moss clinch pole position following a supreme effort behind the wheel of Rob Walker's under-powered year-old Lotus 18.

As the start drew near, thousands of spectators crowded Monte-Carlo's terraces and the decks of the mourned yachts, race director Louis Chiron closed the circuit in a blue Citroen DS 19 and drivers lined up on the Quai d'Albert.

When the flag dropped, American Ginther stormed off the grid towards the Gasometer with the bustling pack in hot pursuit. Everyone managed to sort themselves out by Ste Devote with Clark, Moss and Bonnier trailing the Ferrari up the hill towards the Casino. 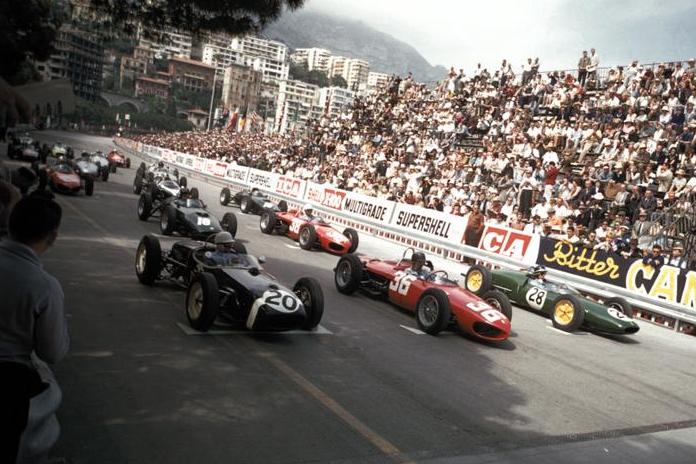 Ginther completed the first lap out of 100 with a 3-second lead, but as the race developed, he gradually fell into the clutches of Moss and Jo Bonnier's Porsche, giving way to both on lap 14, and then to team mates Hill and Von Trips ten laps later.

Up front, in typical style, Moss' driving appeared smooth and effortless, his consistency and speed unrelenting in spite of the Riviera heat and the surging backmarkers.

Slightly after the half-way mark, the Lotus still enjoyed a 4-second advantage but behind, a scarlet-red formation of Ferraris, consisting of Hill, Ginther and Von Trips, was on its way to wolf down the dark blue machine.

Choked by his under-powered four-cylinder Climax engine, Moss' prospects of fending off the weighty Italian challenge appeared dim. But even an extra 30 bhp was no substitute for the skill of the great British driver. 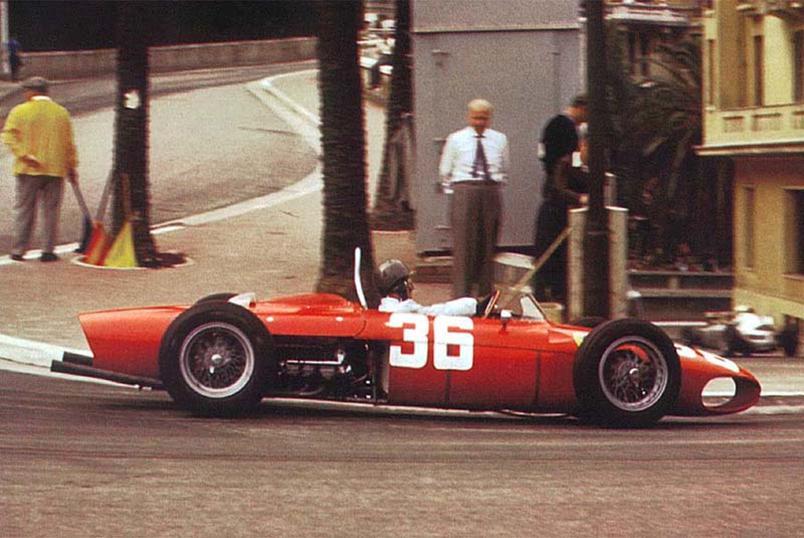 On lap 75, having shadowed his teammate for the preceding 30 laps (presumably on instructions from Ferrari manager Romolo Tavoni), Ginther was finally given the "go-ahead" sign and Phil Hill moved over, clearing the way for a final assault on Moss.

With each passage, Ginther slammed it harder, spurred on by the Scuderia's "Faster" pitboard. As tension grew, the young Californian gained precious yards, but with each faster lap, the master responded with an equal new blistering time.

On the brink in every corner, near every curb, Ginther gave it all to the very end while a vast British contingent could hardly contain itself as Moss emerged from the tunnel and whooshed through the chicane for the very last time. 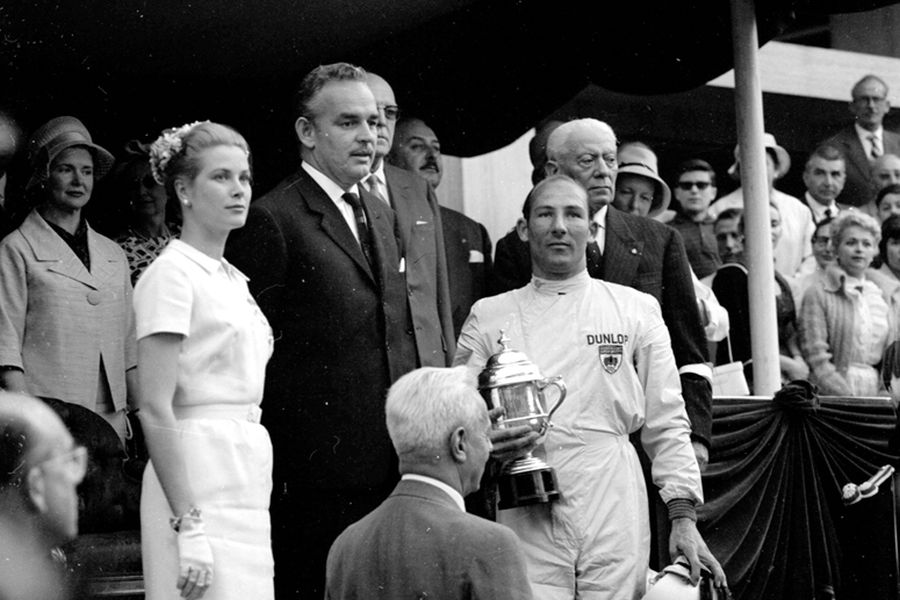 The checkered flag fell for the Lotus after an unforgettable display of virtuosity, Moss collecting his third Monaco victory, a feat no other driver had ever accomplished at the time.

Moss' triumph in Monaco in 1961 is remembered as one of the greatest and most competitive drives of all time - it was also Lotus' maiden F1 win - but Ginther's charge is also considered as his finest moment, although years later his own view on the subject appeared tainted with displeasure as he felt he had been held back that day by Phil Hill.

Had Ginther been successful in getting in front, it is doubtful whether or not he could have stayed there, such was Moss' mastery and prowess on his "jour de grâce", in a race that would span the ages.

Does Norris need to get serious to succeed in F1?