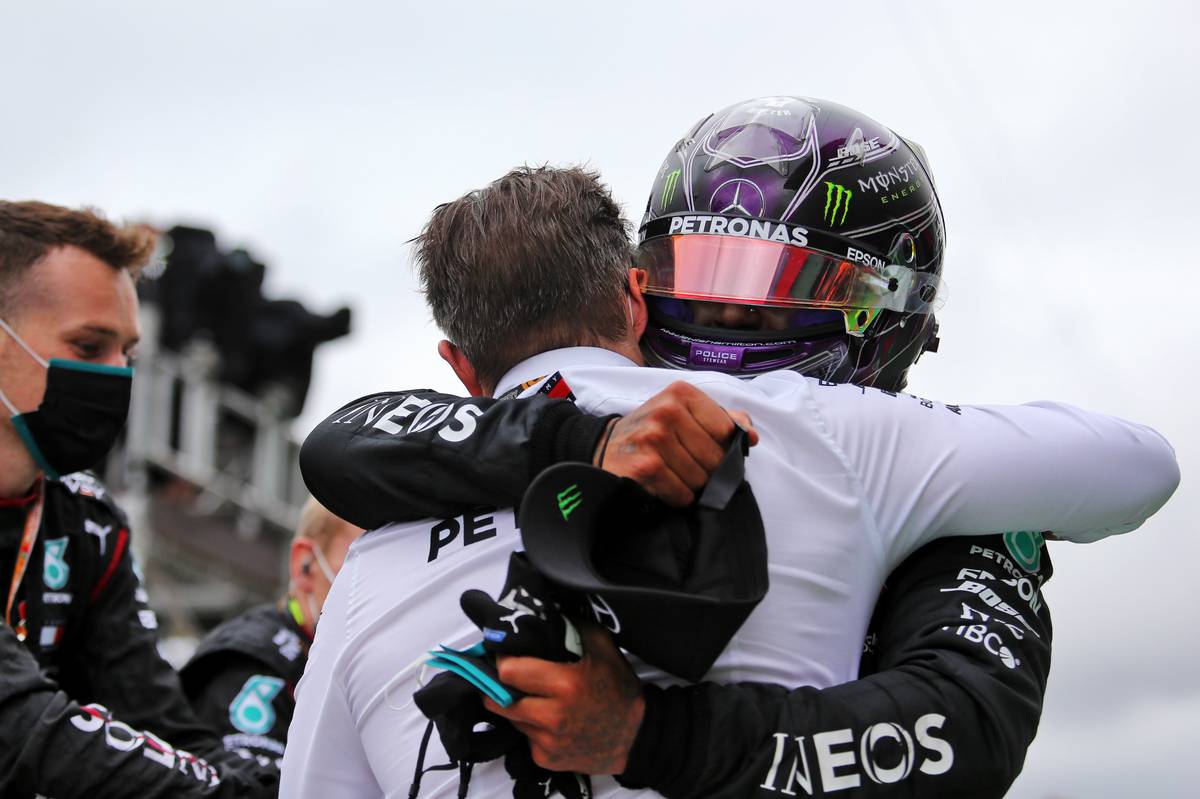 Valtteri Bottas
"The opening lap on the race was really good, there was a bit of drizzle which made it tricky and some cars with the soft tyre had the upper hand, but I was pretty pleased to get the lead. To be honest, after that I just didn't have the pace today, and I don't understand why - no pace whatsoever. Of course, I tried to defend when Lewis came closer, but there was nothing I could do, like I said I don't know where the pace was today. I was pushing hard but I couldn't go faster. Later on in the race I was hoping to extend my first stint a bit and go for the Soft tyre at the end but I don't think it would have made a difference to the result today. It was a tough one for me, and I will be working hard with the team to understand why, then come back stronger next weekend in Imola."

Lewis Hamilton
"First, I owe these 92 wins to the team here and back and the factory for their tremendous work. They are continuously innovating and pushing the barrier, even higher every year. It's been such a privilege working with them and I am so grateful for all the moments. The reliability has been incredible thanks to the Mercedes team, PETRONAS and all our partners who are continuously pushing. No one is sitting back on the success, everyone is pushing and pushing and pushing. That's the most incredible thing to be surrounded by: it inspires you, that collaboration, and there's nothing quite like it. Today was tough. It was all about tyre temperatures today and that's something I was able to, with the set-up, I pre-empted it. They said it was going to rain only after the race would be finished, but we got some drops at the start and going into Turn 7 there was a huge oversteer moment and then you didn't know what was next. I really backed up massively and I should have probably defended from Valtteri, but I said to myself that I'd come by later and fortunately that's what I was able to do. It's an incredibly physical sport but I had a cramp in my right calf and I had to lift quite often down the straight because it was about to pull. Pretty painful, but I had to get through it because it is what it is and you can't lift the whole lap! I could only ever have dreamed of being where I am today. I didn't have a crystal ball when I chose to come to this team and partner with these great people. What I can tell you is that I am trying to make the most of it every single day. Everything that we do together, we are all rowing in the same direction and that's why you're seeing the success that we're having. My dad is here which is amazing, my step-mum Linda is here, Roscoe too. I feel very blessed. It's going to take some time for it to sink in. I was still pushing flat out coming across the line and I am still in race mode mentally. I can't find the words at the moment."

Toto Wolff, head of Mercedes-Benz motorsport
"92 race wins, who would have thought that when we embarked on the project in 2013? It's almost a surreal number of wins. It is absolute passion, energy, and everything that Lewis puts into the sport. The talent and the ability just stand out. I think what I've seen this year for the first time with Lewis is that he ramps up his weekends. There is a lot of reflection, a lot of learning, understanding the tyres for the race, and he was just sitting comfortably at the beginning during opening laps, then he just ramped it up and then had unbelievable pace. I think he did it a couple of times now that he was applying pressure, and he was putting Valtteri in a worse position in relation to the tyres. He's just very good at that strategically. The opening laps were very enjoyable. It was amazing to see the McLarens when they were heating their tyres very well when they were on the Softs. You could hear the public screaming when Sainz got into the lead, so I think this is what the sport needs; I was happy for us that we were able to catch up, but I like the situation. It's been a very good day. I'm not sure how I'm going to celebrate because we are living like hermits at the moment, but I am flying to see my wife and my son today, and I'm sure we will have a dinner with maybe a few drinks."

Andrew Shovlin, chief race engineer
"An absolute masterclass from Lewis today, he managed the race brilliantly and had incredible pace. It's amazing to think that now he sits at the very top of the list of winners in the sport and the whole team is very proud of him and what he has achieved. It's also great to be able to add another one-two finish to our season. The start was tricky for both, the medium tyre is difficult to get to work but it seemed like some others had much better warm-up that we did. Valtteri did really well to take the position back off Verstappen after losing it off the line, it was a nice move into turn 3 and once he'd got some temperature in the tyres he was able to pass the McLaren and drove a well-managed first stint. He started to drop a bit of temperature in his tyres around ten laps into the stint which was making the car inconsistent. Lewis at that point had a bit of pace in hand and was able to make the pass. We were surprised how well the medium tyres were hanging on during that first stint and they went further than we had anticipated but when Valtteri picked up a bit of vibration we decided to stop both cars to take hard to the finish. The warm-up on that compound wasn't easy but it had good pace once it was going although we were glad there wasn't any significant rain as it would have been a real handful. We're looking forward to Imola next week, we've not been there for a long time but it's a good track and the two-day format should make it interesting."