In any Formula One team, some members tour the world working at grand prix venues, while others never leave the factory. Miles away from the paddock and its constant humming, these engineers monitor the performance of the cars from their screen-filled control rooms. F1i technical expert Nicolas Carpentiers dissects how their virtual presence – which means actual night shifts on flyaway race weekends – help the track operations team. 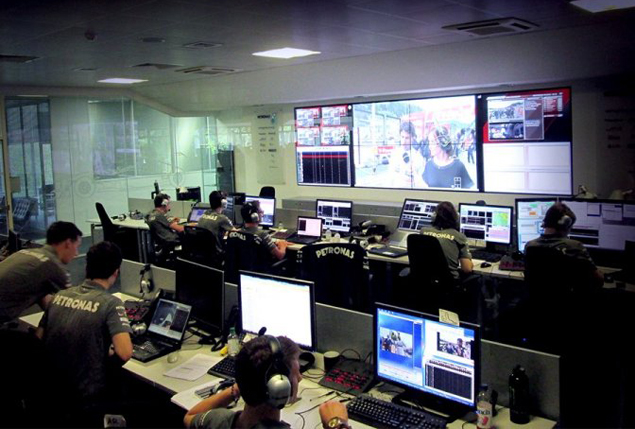 If you thought most decisions taken by an F1 team during a grand prix weekend came from the cockpit or the pit wall, you might want to think again.

Whether this is regrettable or not, more and more choices are made from the factory, more specifically from what is referred to as the ‘operations room’. The place bears some resemblance to a NASA-like launch control room, with a dozen engineers working on many monitoring screens to provide real-time data and support on car performance and set-ups, as well as strategy.

According to regulations, F1 teams can only bring a limited number of staff (60) to each venue, while freight constraints mean they cannot have all their equipment on site either. This leaves plenty of brainpower and resources back at the factory, which development in advanced communication technology has made available from anywhere in the world.

“This is how F1 has changed so much in the last ten years,” Force India chief race engineer Tom McCullough told F1i. “As an example, we were used to having an engineer who was travelling with us to look for the gearbox reliability side of things. He now sits in the factory; he doesn’t travel all the time with us. He has an intercom panel; he has live data in front of him.

“There are some events where he actually comes, some events he doesn’t, and when I sit on the pit wall, I don’t know when I’m talking to him whether he is in the garage or at the factory, because he has exactly the same information. It helps because of the limited number of staff FIA allows teams to bring at the circuit, but it is also interesting from a cost saving point of view: less flights, less hotel rooms, etc.

“Years ago, I worked for one season in the comms room, and you could only listen to the radio and see lap times on the TV screens! Now people at the factory have access to everything I have on the pit wall: all the live data, all the intercom panel buttons.”