There was just one big talking point at the end of Sunday's Turkish Grand Prix. Did Mercedes squander a huge opportunity to put Lewis Hamilton on the podium in Istanbul, or had their safety-first approach saved the world champion from self-inflicted disaster?

Even before the cars made it back to parc ferme at the end of Sunday's race, the radio waves between Lewis Hamilton and the Mercedes pit wall were crackling with recriminations over the team's decision to force him to pit for new tyres with eight laps to go. Hamilton was adamant that it had been a big mistake that had cost him the chance of a podium, having argued that the rain had been about to ease off (it wasn't) and that a dry racing line was about to emerge (it didn't) to bolster his side of the argument. The team was just as convinced that it was the right call to come in. So who was right?

You could understand how it looked from the cockpit. For the last few laps, Hamilton had been closing on Valtteri Bottas and Max Verstappen despite their being on fresh intermediate tyres, while Hamilton was still on the same set that he had started the race on. Why pit and give up track position and more than 20 seconds to his rivals when the tyres still seemed in superior shape?

What seemed to have caught everyone out was just how long it was taken the fresh inters to get up to speed after the pit stops, giving a misleading early impression of the benefits and drawbacks of taking on new tyres. As Ferrari's Charles Leclerc explained:

“At first, in the first five, six laps of the others on the new inters, we were quicker than them on the used inters.

"I was on used tyres and I heard on the radio, they were telling me the lap times of Valtteri on the new set of inters and he was not very quick at the beginning.

“I was like, ‘Okay, maybe we can stay in front with those used tyres’. But the thing is that for seven laps they struggled massively with graining, and then once they went through the graining they found a lot of pace.

“Then once they found that pace, we knew basically that we had to stop, so we stopped – but it was too late." 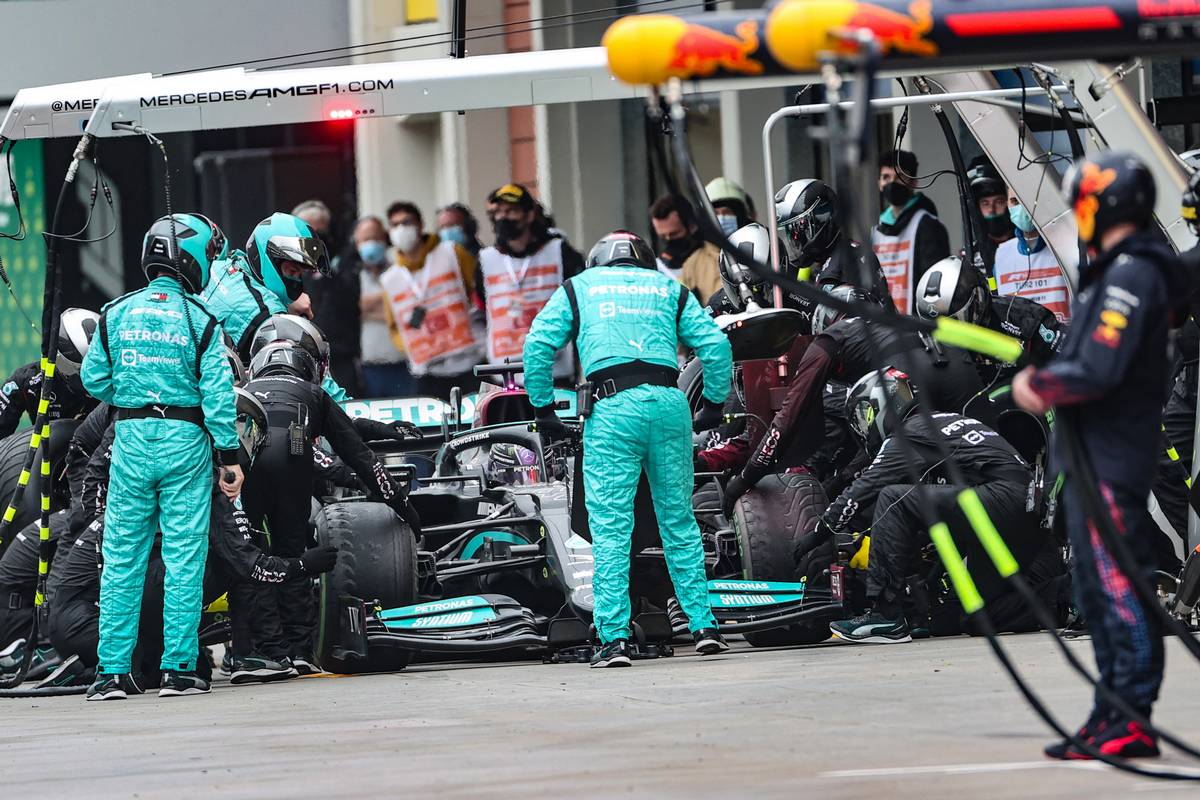 Why had it proven to take so long to switch on the new inters? Before his own stop, Lando Norris had observed that the old inters had worn down to such an extent that they were now effectively slicks, but that's not entirely accurate (as Sebastian Vettel's disastrous attempt to run on mediums on lap 37 clearly illustrated). While the surface of the tyre might have worn completely smooth, there are still different chemicals involved in the creation of the compound, and the physical structure of the tyre is also not the same as that of slicks to make them better able to cope with cold, greasy surfaces. Moreover, the existing tyres were already well up to full working temperature unlike the cold tyres waiting on pit lane, which then took longer than expected to heat up because of the continuing drizzle and wet track. In effect, it meant that the cars were currently happily running on 'super-intermediates' ideal for the conditions - at least, for as long as they lasted.

Before the race, Pirelli had warned the teams not to try running the entire race on a single set of tyres. In layman's terms, they were saying: "When it goes horribly wrong don't come crying to us whining about the tyres like you usually do, because we told you so." In the end only Esteban Ocon accepted the gamble and ran the whole 58 laps on the same set of inters - the first driver to complete a full distance Grand Prix on one set of tyres without the aid of a safety car since Mika Salo at Monaco in 1997. Even so, he was left tiptoeing through the final laps at such a reduced pace that he lost two positions along the way.

If this had been replicated in Hamilton's case, then staying out would most likely have seen him drop off the back of Bottas and Max Verstappen and eventually succumb to Leclerc and Sergio Perez once their fresh intermediate tyres bedded in and got up to speed. In that scenario fifth was still the best outcome he could have aimed for from that point on, and that was assuming Pierre Gasly and Lando Norris didn't manage to catch him in the final minutes to drop him further down to seventh. And that's all supposing that the tyres did manage to make it all the way, or else a DNF in Turkey could have ended up proving to be the decisive factor in the 2021 world championship.

Making a late pit stop was Mercedes' last recourse. It's not like Mercedes didn't give Hamilton's preferred option a chance, but by lap 50 they could see Gasly's speed picking up and they had no more time to bring a waning Hamilton in for his pit stop and still get him back out ahead of the AlphaTauri. Any longer and even fifth place would have been out of reach using this strategy. But stopping so late meant that it now took virtually the whole of the remainder of the race for Hamilton to get back the performance he'd enjoyed up to then, leaving him fuming behind the wheel even as he did manage to hold on to fifth. 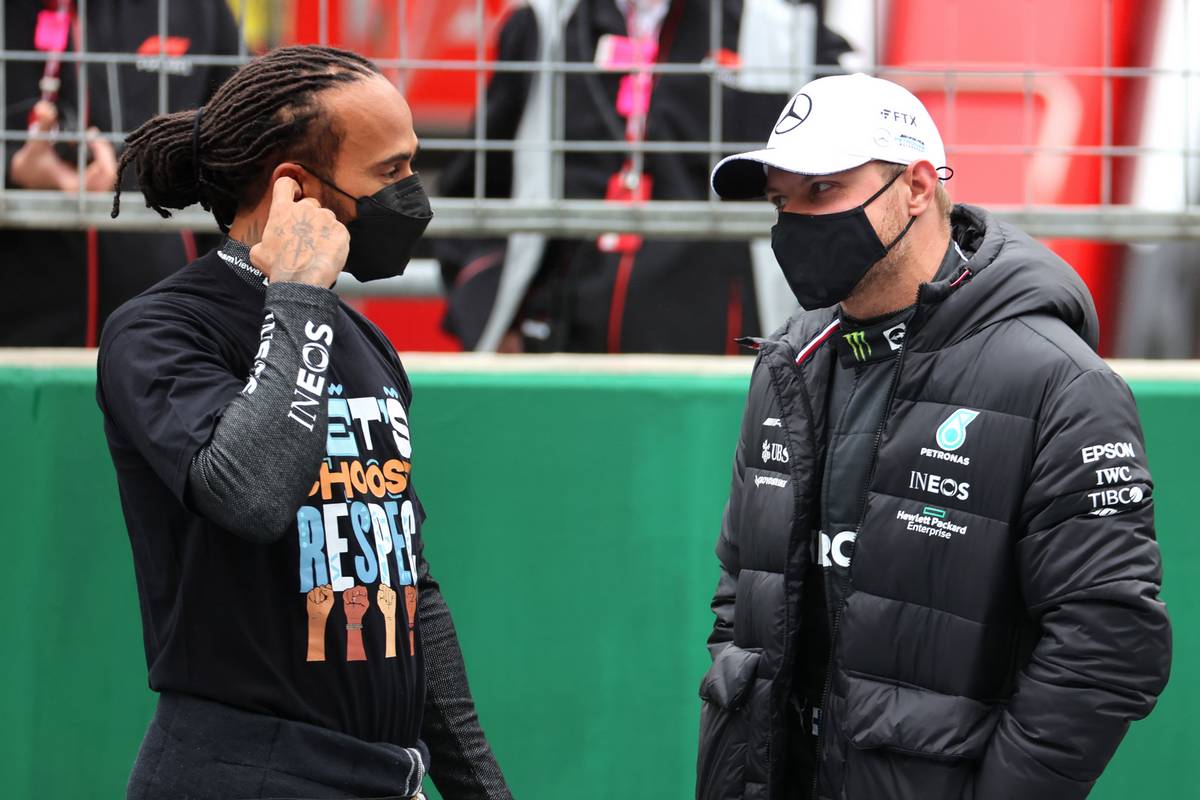 Had there been a third option available to the team on Sunday? Hamilton's original gut instinct had been to want to pit at the same time as the leaders, Bottas and Verstappen, on laps 36 and 37 respectively. At the time Hamilton had been pinned behind Perez who was proving impossible to pass, so an early pit stop offered the possibility of undercutting the Red Bull giving him an outside chance of grabbing victory or at least a podium. However to pull this off Hamilton would actually have had to wait until after Perez made his own stop and gone for the overcut instead. That's not the usual strategy in such circumstances, but any earlier here and he would have suffered from the same unexpected 'bedding in' issues between the two sets of inters and been slower than Perez staying out on the existing inters. In this case, pitting the lap after Perez would have been his best chance of coming out ahead of the Mexican on track, from where he would then have doubtless done everything to stay in front until the tyres were finally up to speed.

That strategy seems to be the only way Hamilton could have salvaged a podium on Sunday after starting the race with a ten place grid penalty, but it would have needed a large dose of hindsight to appreciate the extent of the 'bedding in' problem to go for the overcut rather than the undercut, and the execution would have required instant reactions by both the driver and team to pull it off rather than spending several laps in debate and discussion. If it had succeeded Hamilton could have walked away from Turkey with 15 points, putting him just a single point behind Verstappen in the drivers standings rather than the six points away he now is. But this outcome is no where near as bad as the 16 points he could be down if he'd tried to push to the finish and ended up with a tyre failure putting him out of the race altogether.

Ultimately it seems that fifth place was the best he could realistically have achieved this week, and a good compromise between the risk and reward on offer. Hopefully, once he's had a chance to review all the race data from a wider perspective than he had from the cockpit during the race at the time, Hamilton will come to realise why things had played out as they did and how it was almost certainly the best that they could have managed from where they started.

We just have to look back two weeks ago to Lando Norris' 'guts or glory' decision to try and stay out at the end of the Russian Grand Prix to be reminded that sometimes discretion and damage limitation are the better part of valour - not to mention a potentially crucial factor in the eventual outcome of this year's world championship.