F1i technical expert Nicolas Carpentiers provides you with a first series of images and explanations on the 2016 Formula 1 power units. 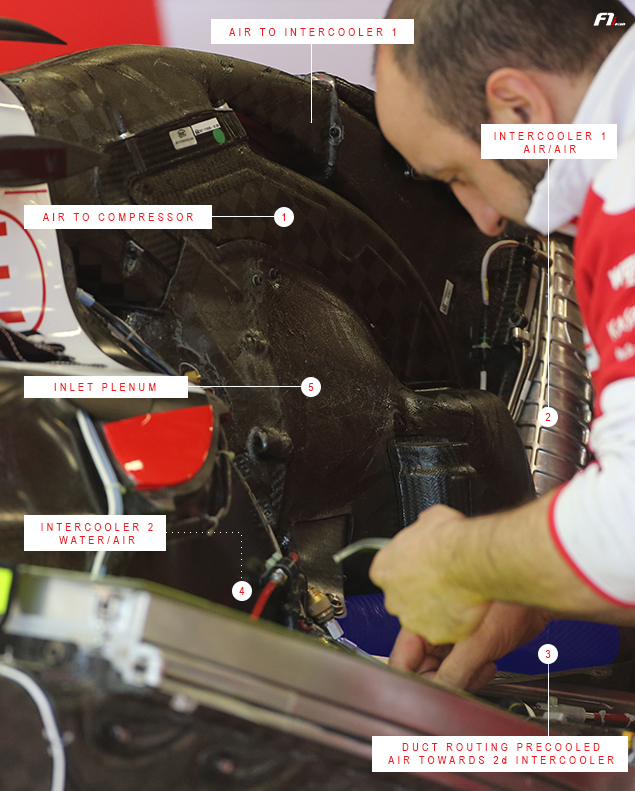 The FIA revealed last week that Ferrari had been the biggest spender in terms of engine development tokens over the winter, with the Scuderia using 23 out of its 32 tokens allocated in order to design its new 059/5 power unit.

The Ferrari intercooler used to sit within the ‘Vee’ of the engine last year. It has been replaced by a two-element setup whereby one air-to-air intercooler is positioned atop the gearbox while the second component – an air-to-water intercooler – is lodged within the chassis itself, at the back of the monocoque and behind the driver.

Therefore, the cooling process now involves two steps on the Maranello-bred unit. The incoming airflow first goes through the air-to-air intercooler and it is then transferred to the second air-to-water device via a big duct (here coloured in blue) that is located on the left hand side of the engine.

Why did Ferrari’s engine engineers elect to go for such a sophisticated layout? Having the intercooler in between the two cylinder banks was undeniably ideal to obtain a tight package, but this setup did not allow for the variable inlet trumpets seen on all other V6 turbos last year.

In the end, the intercooler had to be placed somewhere else. Ferrari could have moved it in the sidepods, either as a single element like on the McLaren or by using a split-intercooler design in a manner similar to Red Bull. Ultimately, the Italian engineers have gone for a double installation in order to clear the sidepods as much as possible and curb airflow resistance, which in turn limits drag.