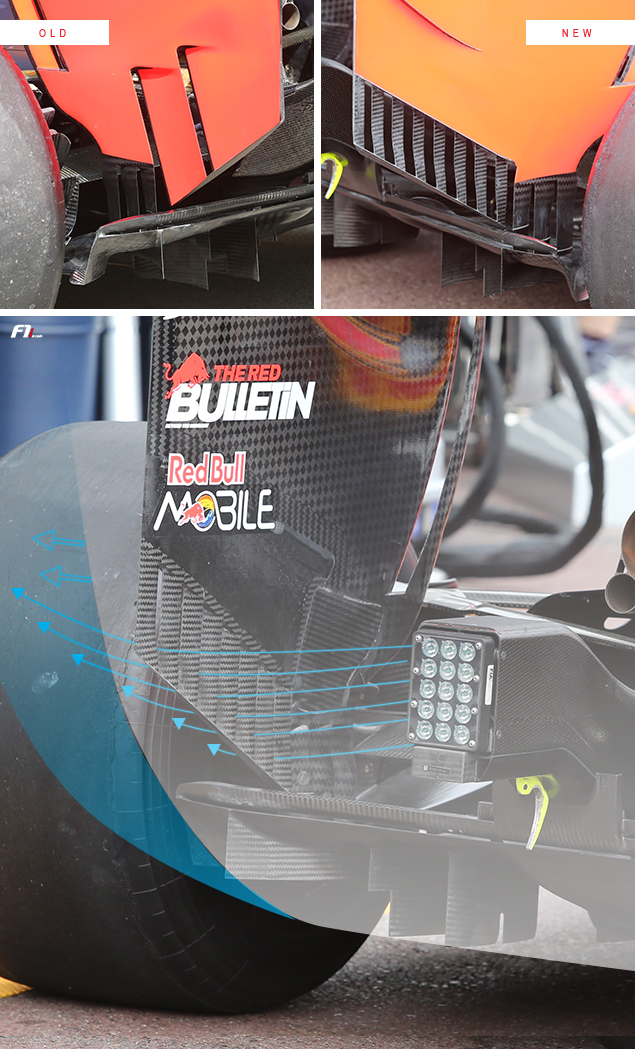 Red Bull has modified the endplates of the RB12’s rear wing. Since 2015, the Milton Keynes outfit had been running a design initially introduced by Mercedes one year before. Instead of sporting a series of small slits, there were two long notches starting from the lower endplate. While McLaren adopted the installation on its MP4-31, Red Bull has now reverted to a more conventional layout, which it had raced until 2014.

The endplates of the Red Bull rear wing used in Monaco were serrated, with several dents made in their lower sections to create a series of small vanes. Most other cars sport the same rear wing installation but the number of vanes differs, from 11 on the RB12 to four on the Ferrari SF16-H (which also has eight horizontal slits on its endplates). These curved winglets help guide the airflow to the outside, which in turn contributes towards expanding the airflow coming out of the diffuser.

What actually happens in this key area of the car? The air flowing on the inner face of the endplate goes through the slits. It is then channelled towards the outside thanks to the aforementioned vanes. Their curved outline also helps accelerate the airflow, which then generates a low-pressure wake that sucks up, from both sides, the airflow coming out of the diffuser.

In a way, the endplate slits complement the action of the turning vanes located underneath the car. The rationale remains to expand the low-pressure area in the wake of the diffuser, with the ultimate goal of generating more downforce.

The long notches that can be seen on the Mercedes and McLaren work slightly differently but the end objective is similar. It is worth noticing that while Mercedes tends to have saw-tooth details on its bargeboards, turning vanes, and wing flaps, it does not apply this ‘serrated’ philosophy to the rear endplates.

From the cockpit: Felipe Nasr on a controversial Monaco GP