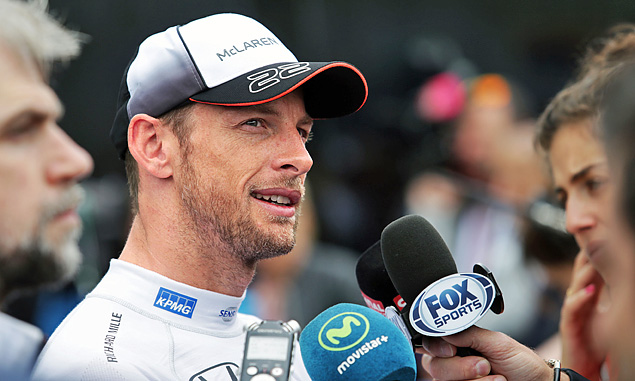 Fernando Alonso
“This weekend has been positive for us so far.

“We’re still missing a little bit of speed along the straights, but we can fortunately compensate for that through the long corners around here. So I think we’re in a position where we could score points tomorrow.

“In qualifying, we ultimately didn’t have the speed to climb any higher in Q3; but starting ninth, following Sebastian’s [Vettel] penalty, is a good place for us, particularly after two races with reliability issues.

“There’s wet weather forecast for tomorrow, and some drops of rain in the middle of the race would make it more fun for me, so I think we’re ready for anything that comes our way.

“I’d love to see two McLaren-Hondas in the points tomorrow.”

Jenson Button
“It hasn’t been a lucky weekend for me so far. One of the rear-wing endplates became detached from the floor on my first flying lap in Q1, and the rear end of the car slowly deteriorated for the remainder of the lap.

“It happened into Turn Eight, which is where the high-speed corners start, and where you need downforce, so I’m surprised I even did the lap time I did, to be honest.

“We tried to fix it in order go out again for a second run, but sadly we ran out of time.

“Still, I’m smiling because it is what is. We’ll deal with it, and we’ll come out of it stronger. I’ll be hoping for rain and something unexpected to happen in the race, and I’m still aiming for points tomorrow.”

“First of all, Jenson’s rear-wing endplate unbonded itself from his car’s floor, and the resulting damage took too long to repair to enable him to go for a second hot lap. That was a great pity, because Jenson was understandably keen to impress at his home grand prix.

“Fernando has been ‘on it’ all weekend, and he continued to perform extremely well in today’s qualifying hour. He progressed through Q1 and Q2 with impressive sang froid, and duly recorded the eighth-fastest lap of the afternoon. However, he lost a lap owing to the ‘track limits’ rule, demoting him to P10, which will become P9 tomorrow as a result of Sebastian’s penalty.

“Tomorrow’s forecast is for showers in the afternoon – and, that being the case, bearing in mind the tried-and-tested brilliance of both our drivers in unsettled weather conditions, do not be surprised to see both Fernando and Jenson making good progress once the five red lights go out on the start-line gantry tomorrow afternoon.

“The British Grand Prix means a lot to all of us at McLaren-Honda, and we would be truly delighted if we were able to give our fans, who are undoubtedly the best fans in the world, something to cheer about.”

Yusuke Hasegawa, Honda R&D head of F1 project
"Today was further confirmation of our progress this season, despite a mixed final qualifying result. Fernando drove back into Q3 for the first time since Canada, with a brilliant final flying lap that put him P8 on the grid at this power-hungry Silverstone Circuit. Sadly his time was deleted due to exceeding the track limits, but he will start ninth on the grid due to Vettel's penalty.

"Unfortunately, Jenson had to settle for P17. He was unable to run for a second time in Q1 due to an unbounded rear-wing endplate from the floor, so we look forward to seeing him fight to gain positions in the race tomorrow."