Still the class of the field, the Mercedes W07 features several hidden and unique concepts under its bodywork. F1i technical expert Nicolas Carpentiers provides you with exclusive images and explanations. 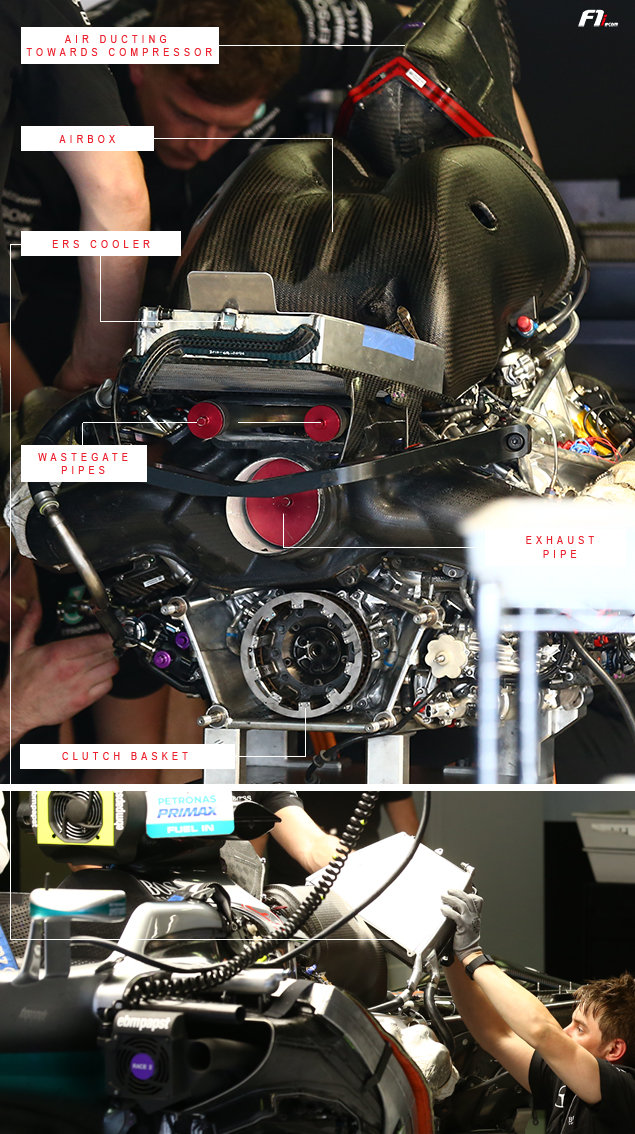 On the 1.6-litre V6 turbocharged Mercedes power unit, the clutch is mounted on the internal combustion engine (ICE) rather than on the gearbox, which would be a more conventional installation.

Lower engine revs (limited at 15,000rpm) in the latest turbo era allow having the clutch above the ICE. Such a layout is not new and actually the better option given the significant increase in torque compared to the previous normally aspirated V8 engines. Mercedes adopted it as early as 2014 on its PU106A, with Honda following suit later on.

Under the exhaust pipe, one can clearly see the clutch housing bolted to the crankshaft on the engine exit. On the image above, the housing is empty and devoid of its lid. There are usually six carbon disks inside, which make up the friction surface. Three serrated disks are attached to the clutch housing and powered by the crankshaft. The other three disks, which are mounted alternately with the serrated ones, have a smooth rim but an indented centre that connects with the drive shaft. Thus, the three disks that are attached to the clutch housing power the other three, which in turn transmit torque to the gearbox, then to the wheels.

Around the exhaust pipe, the collector is wrapped in a case made out of a composite material (in black), with Zircotec insulating coatings on the inside (in white). The heat is very high in that area of the engine, hence the need to protect the other components, most notably the trapezoidal-shaped radiator that cools down the energy recovery systems (ERS). This cooler is installed just above the two wastegate pipes.