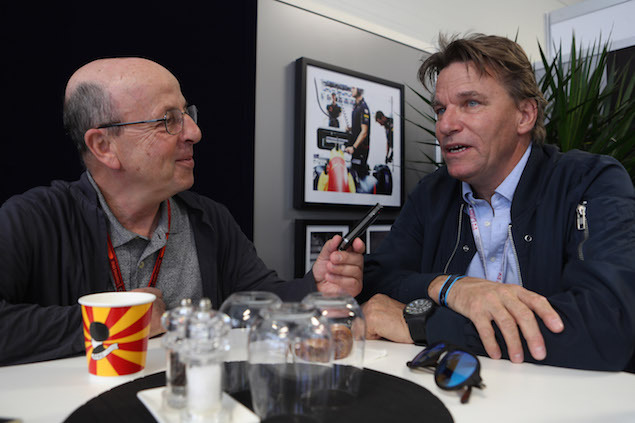 You’ve done so many other things. You used to run a travel agency.

Yeah. It wasn’t so much me. It was my girlfriend actually, then wife. That was back in the good old days when you had this AD75 deal. It was just a backdoor way to get super cheap first-class tickets to travel around. I flew first class for two grand all around the world because I owned a travel agency. It was a clever way to dodge having to spend 25 grand. It was a fairly cheap investment compared to what I saved on the tickets.

When you stopped racing, did you know what you were going to do?

I never really stopped, to be honest. I might actually do the Abu Dhabi 12 hours later this year again. I race because I still enjoy it. There’s still nothing in this world that can replace the state of mind you’re in when you race when you’re totally focused and every sense in your body is on maximum alert, it’s just the feeling...I’ve never found anything that gets near that, not even close.

In Sweden you were known as Little Leaf and your dad was Big Leaf. What’s that about?

He was Leafy is the abbreviation of that because he grew up in a little village called Leaftown. In Sweden, it’s very common to be called Little after someone who already has a nickname. Little Boot, Little Hockey Players. So I became Little Leaf and that kind of stuck.

There really is an Indian chief somewhere out there who’s called Little Leaf as we had a mix up over email addresses.

Exactly. There really is an Indian chief somewhere out there who’s called Little Leaf as we had a mix up over email addresses.

What else keeps you busy? Do you like living in the States?

I do, yeah. I love California. I love the climate more than anything. LA, I’ve been there 14 years now. It’s gradually getting a little bit of culture. There’s an exciting arts scene going on at the moment. There’s a lot of stuff happening. Food is great. Most of all, it’s about being able to wake up and look at the ocean every morning. The weather, every day is a perfect day - for me it makes a huge difference. Having said that, I do miss Europe and London in particular a lot. London is still my spiritual home I feel. All my closest friends are still there.