Catch up with what all the teams had to say following the 20th race of the 2016 season, the Brazilian Grand Prix at the Autodromo José Carlos Pace. 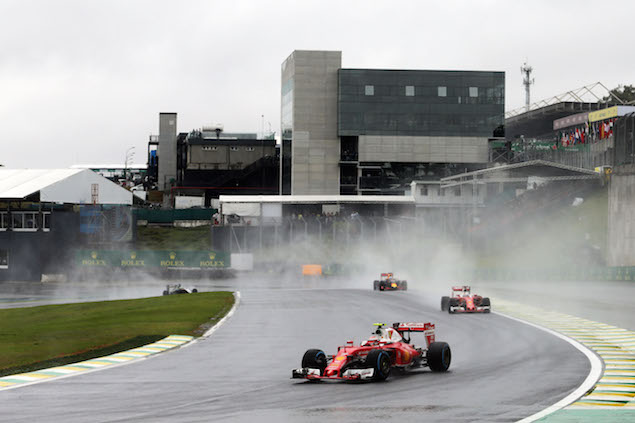 Sebastian Vettel
“Obviously, today it was not ideal: in the first part of the race I span, I had some aquaplaning but I wasn’t the only one. I think it was a good recovering in the end, it was difficult to come back, and I struggled to get past Sainz: I don’t know why it took me a lot of laps before I really started to feel well in the car, and then it was too late. About the duel with Verstappen, I think I was racing side by side to him and he saw me. I still had a little bit of my nose ahead, he was much faster so it was about making the corner and he got past. Not a difficult passing manoeuver, but I don’t think it was fully correct. But I wouldn’t complain about anything today: I think I was not the only one who got caught out by the aquaplaning, but luckily I didn’t crash.”

Kimi Raikkonen
“The conditions today were not the easiest ones: it was very tricky, and when you do many laps behind the Safety Car it gets even more difficult. It was not raining heavily, but there was a lot of standing water. The biggest problem was the aquaplaning and I got it in a place where I was not expecting it: I spun off on the straight! I almost got the car back, but then I went off in a pretty bad place. The Wet tires are very vulnerable, easy to aquaplaning. It obviously depends on the circuit and on many other things, but comparing to some years ago, those tires could handle this kind of water with no issues of aquaplaning.”

Maurizio Arrivabene, team principal
”Maybe we could have achieved more, both yesterday and today, but no room for complaining now. Kimi’s accident was a shame, while Seb had a great comeback after spinning off track. Now let’s focus onto Abu Dhabi: it’s the last race of the season but, as we always say, we’re not giving up till the end.”