With 2017 and its radical regulation changes looming ever closer, Formula One teams are taking advantage of the track time available across the final grands prix of the current campaign to continue their homework for next year. 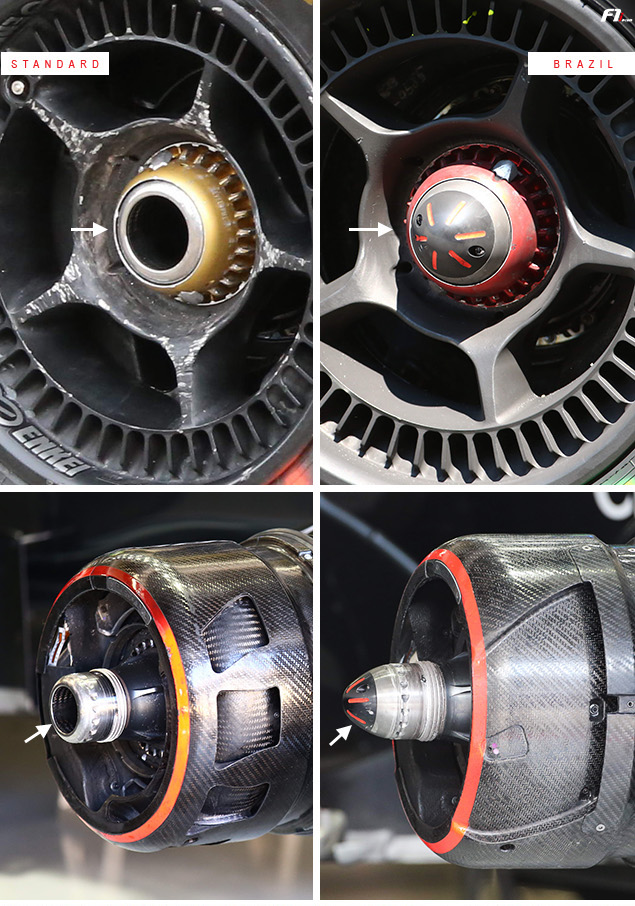 At Interlagos, McLaren closed off the front wheel hubs on its MP4-31. Blown front wheel hubs first appeared on the 2013-spec Williams FW35 before making a return in 2015 at Ferrari, McLaren, and Red Bull, with Force India and Toro Rosso following the trend this year. The rationale behind the concept is to deflect part of the airflow usually captured by the brake ducts before the energised flow is blown through the open wheel hub (as a result of the Venturi effect).

When ambient airflow encounters a rotating wheel, several phenomena happen, including airflow separation from the tyre’s surface (marked in orange on the image below). This creates areas of low-pressure and turbulent air both above and around the wheel. This dirty wake, known as ‘tyre squirt’, generates drag but also upsets the airflow underneath the car as well as at the rear. 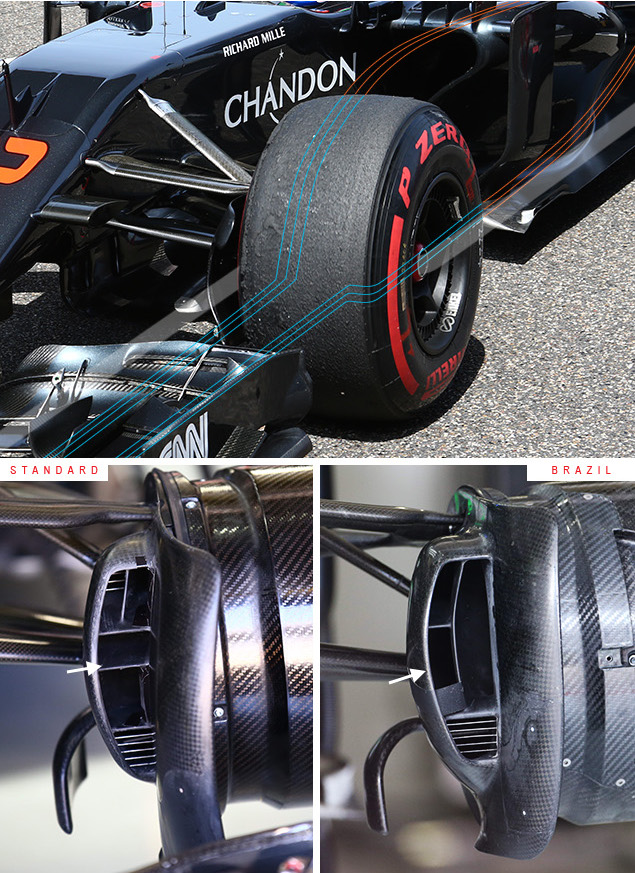 The high-pressure air that is blown through the open wheel hub (see the white outline on the top image above) helps prevent airflow separation, while also pushing away the dirty wake disrupting the air underneath the car. The blown front wheel hub concept does require compromise though, as it still creates some drag.

The design serves the same purpose as the front wing arches devised by Mercedes. Therefore, it might not come as a surprise to see the W07 devoid of open wheel hubs, as these would have probably been rendered superfluous given the strong vortices already generated by its front wing.

One will remember that Ferrari had closed off the wheel hubs on its SF16-H in free practice for the Belgian Grand Prix. In Brazil, it was McLaren’s turn to assess the impact of the change – probably with an eye already cast towards 2017 – which means the team had to tweak the design of its brake ducts for the Interlagos event.

McLaren thus continued to collect data on the prototype front wing it had introduced in Austin last month and that features a flatter outer section.

Scene at the 2016 Brazilian Grand Prix

From the cockpit: Felipe Nasr on two precious points