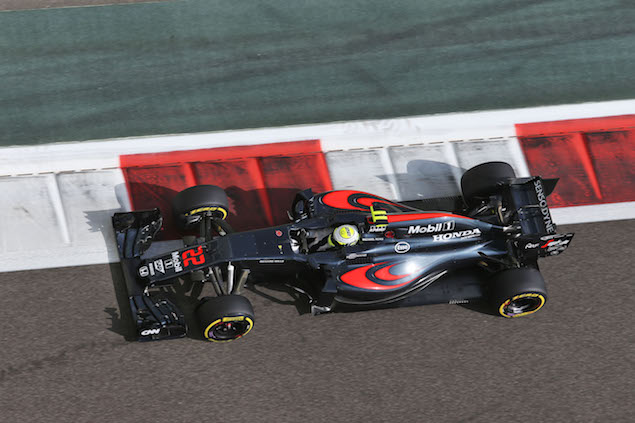 Fernando Alonso
“As a team, we need to take every opportunity we can to test things on the track for next year. We need to learn and understand as much as we can about configurations or philosophies that we can put into next year’s car. And today was a day when we could really improve our understanding – particularly in FP1, which isn’t really representative of the conditions we’ll find in either qualifying or the race, so it made sense to experiment a little.

“In FP2, we had our only opportunity to learn about the tyres in similar conditions to those we’ll experience in the race – at night, and with cooler track temperatures.

“It’s been a positive start to the weekend – let’s hope we can maintain that momentum into the race.”

Jenson Button
“Wearing my old 2009 helmet design today was great – the colours are fantastic, but the memories are even better.

"It wasn’t a great day for us – we had to stop running fairly early in FP1, then elected to change the power unit before FP2. Then I got out half an hour into the session. It might’ve been a bit of a troublesome day, but I still think we learned something useful by the end of the day’s running.

"It’s fun to drive around here, and I think our race pace will be stronger than it has been for the past few races, we’ve just got to pull it all together by qualifying strongly.

“Whatever weekend we have, I want to make it as good as I can – and not just because it’s my last race. Hopefully we’ll be stronger tomorrow.”

Eric Boullier, racing director
“We noted an ERS data conflict on Jenson’s car during FP1, and chose to stop early to investigate the problem. As a precaution, we changed the power unit between sessions – but didn’t conclusively find a problem with any of the components. The mechanics nonetheless did a fantastic job to ready the car for FP2, and Jenson’s run-plan was barely affected.

“In terms of pace, we’re comfortable, but we need to go away and dig a little deeper into the data in order to get a better feel for some of the underlying degradation issues with the tyres. Given the day-to-night nature of the practice sessions, this is always something of a difficult day from which to draw any firm conclusions. We’ll definitely be crunching the numbers deep into the night in a bid to begin tomorrow with a better understanding of how to best tackle the remainder of the weekend.”

“Fernando ran smoothly all day, whereas Jenson’s ERS detected an anomaly in water pressure and we were forced to cut short his run in FP1. Though we did not find any hardware issues on Jenson’s car, we elected to pull forward our plans to change the Friday PU within the session so he could run FP2 with his race engine. Thanks to the swift work of the mechanics, and Fernando’s consistent data gathering, it did not take long to improve both cars’ balance as the long-runs continued throughout FP2.

“We still have more work to be done tonight but a P11 and P12 finish for both cars is a good start towards tomorrow’s qualifying.”