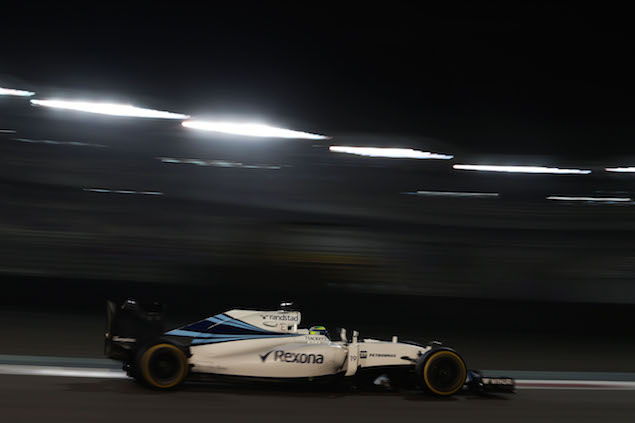 Valtteri Bottas
“As a Friday, everything went well. In FP1 we were doing some pretty specific tests with the engine and aerodynamics so, from the lap times, it’s difficult to comment. But FP2 felt a lot better and it looks like we are where we have been at the last few races. Once again, we’re battling with Force India. But I know there are improvements we can make to the car and there’s plenty more to come tomorrow.”

Felipe Massa
“It was my last Friday so I would have loved to finished in first position! In fact, I’d like to that on my last Saturday and especially my last Sunday too! Today we were trying to find out as much about the tyres and the car as we could, particularly on long runs. It won’t be an easy race, but I will definitely do everything I can to have a good result here in Abu Dhabi for my final grand prix. I will try to enjoy it as much as I can – but the best enjoyment will come from a good race result, so that’s what I’m hoping we can achieve on Sunday.”

Rob Smedley, head of performance engineering
“In general, we can be quite happy with today’s running. We ran a complex test programme in FP1, predominantly for next year and this weekend, and have got some really interesting test results, which we’ll be carrying into the winter. FP2 was more concentrated on this weekend’s grand prix; running low and high fuel, both of which looked good. We tried two different set-up directions on the car, which has helped us understand and identify the clearest direction to work on for tomorrow. The high fuel on the ultrasoft tyre looked really good. And on the prime and option tyres we look reasonably competitive so, whilst we have a little bit of work to do on the car set-up and configuration tonight, overall we are looking in pretty good shape.”