Formula 1's mandatory two-week factory shutdown did not prevent teams from unleashing a series of technical novelties at Circuit de Spa-Francorchamps. Having ruled the field in the Belgian Ardennes 12 months ago, Mercedes no longer enjoyed the same edge over the competition this year, despite introducing an updated power unit that triggered further controversy regarding oil consumption.

Let’s delve into the details: each car was fitted with a fourth and upgraded internal combustion engine (ICE), turbocharger, and MGU-H. Although there are still eight race weekends left in the 2017 campaign, the Brixworth engineers are convinced they can go the distance within their annual allocation of four entire power units.

The Spa specification would reportedly bring an extra 10bhp, while the previous development focussed on improving reliability. According to renowned F1 journalist Mark Hughes, the Mercedes power unit was set up in an uncommon way.

Usually, the ERS (energy recovery systems) automatically cuts off at the end of the Kemmel Straight. Indeed, the amount of energy that can be stored per lap is limited, which means it makes more sense to save it for a later portion of the circuit, when the lap time gains are higher, e.g. on the exit of Pouhon for instance. However, Mercedes made it possible for Lewis Hamilton and Valtteri Bottas to override the automatic shutdown in a bid to stay out of reach of the Ferraris on the approach to Les Combes. 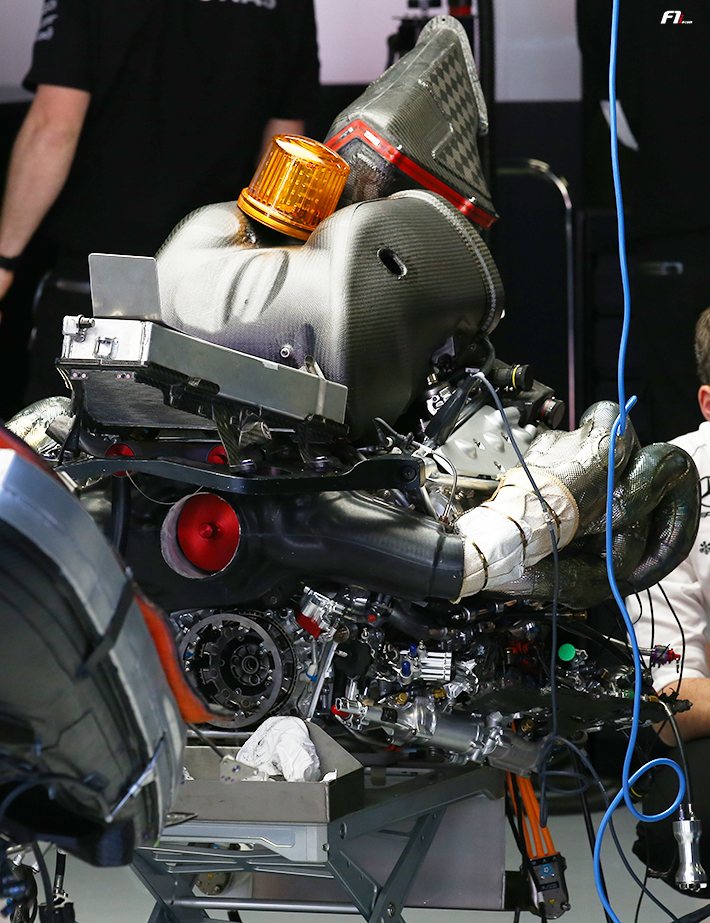 Mercedes’ engine evolution raised further doubts regarding oil consumption levels, which have been gradually lowered amid suspicions from the FIA that engine suppliers have been using oil burn stratagems to increase engine power, especially in qualifying trim.

From this weekend’s Italian Grand Prix onwards, oil consumption on the new engine specs will be limited to 0.9 litres of oil per 100km, before going down to 0.6L/100km next year. This also means that engine manufacturers were free to introduce power units that comply with the previous 1,2L/100km restriction right until F1’s upcoming visit to the Temple of Speed.

With technical regulations mandating equal specs for works and customer outfits and Mercedes-powered teams Williams and Force India set to get their hands on the engine evolution in Italy, Mercedes was expected to abide by the 0.9L/100km limit as well on its new power plant.

It has since emerged that the FIA has authorized the three-time world champions to use their latest power unit spec at the pre-Monza oil consumption levels, much to the annoyance of Ferrari.

Indeed, the Scuderia has planned to introduce its new engine spec at its home event, which means it will have to comply to the lower oil burn levels of 0.9 litres per 100km.