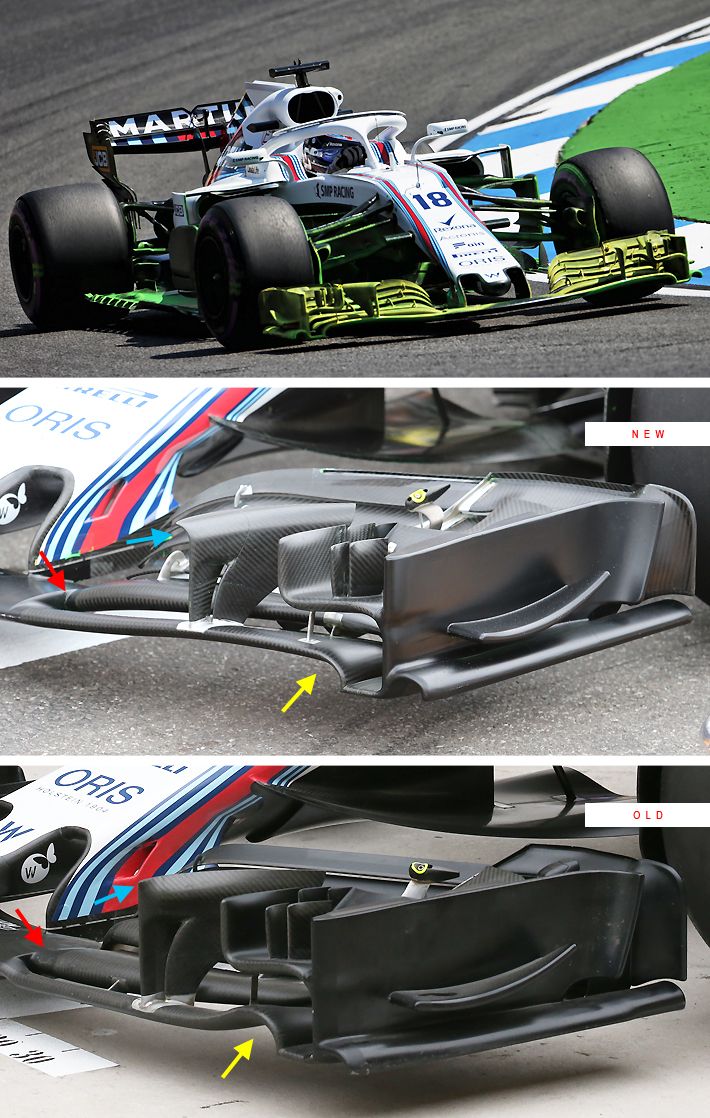 To schematize, the front wing generates downforce but also allows adjusting of how the airflow will go over the rest of the bodywork. If the airflow is unstable in key areas of the car, it may lose downforce without warning. This is why the teams are reluctant to upset the philosophy of their front wing: they tend to keep their concept and rather adapt the rest of the car accordingly. Mercedes, for example, has hardly changed its front wing since the 2015 Chinese Grand Prix.

Curiously, Williams has kept his front wing while changing – top to bottom – the rest of the bodywork on the FW41. In theory, the graft should have taken, but the track test proved the opposite…

At Hockenheim, the team tested and validated a new front wing model, less to increase support than to generate a more stable load. Since the beginning of the season, the FW41 is suffering from sudden losses of downforce, which prevent Sergey Sirotkin and Lance Stroll from driving with confidence. Therefore, the current priority of the Grove aerodynamicists – under the direction of Doug McKiernan (former McLaren) after the dismissal of Dirk De Beer at the end of May – is to develop a more balanced car with more predictable reactions.

That said, the FW41 did not have the new diffuser tried in Britain in free practice and subsequently abandoned after serious offs. If it brought a performance gain, the design of the new strakes sometimes prevented the diffuser from functioning when the DRS was activated. “It was something that was entirely unexpected as a side-effect,” Paddy Lowe told Motorsport. “We understand that now and we’re not running those parts anymore.” Proof that Williams still has some work to do to make its simulation tools correlate with the track.