Sebastian Vettel took his second victory of the season to win a chaotic Hungarian Grand Prix from Daniil Kvyat.

The race was punctuated with incidents, collisions and penalties galore as a brilliant start from the two Ferraris saw Vettel lead team-mate Kimi Raikkonen on the opening lap. Vettel was rarely threatened until a safety car period for a big crash for Nico Hulkenberg bunched up the field, but there was plenty of drama still to unfold behind him.

Kvyat took his first podium after inheriting second when Daniel Ricciardo and Nico Rosberg collided late in the race, with Ricciardo coming home third after escaping punishment. Max Verstappen was fourth having stayed out of relative trouble to secure his best F1 result to date, finishing ahead of Fernando Alonso's McLaren and Lewis Hamilton - who made numerous errors - in sixth.

Romain Grosjean took seventh ahead of Rosberg who was left with a puncture as a result of the Ricciardo collision. Jenson Button was ninth ahead of Marcus Ericsson's Sauber.

Vettel got the jump on both Mercedes drivers in to Turn 1 to take the lead, with Raikkonen storming through from fifth on the grid to snatch second from Rosberg in to Turn 2. Pole-sitter Hamilton then made an error attacking Rosberg in to the chicane and went off, dropping to tenth place on the opening lap.

The two Ferraris pulled away comfortably at the front, with Rosberg unable to keep up in third but pulling away from Valtteri Bottas in the opening laps. Ricciardo had gone backwards at the start, dropping from fourth to seventh, but soon moved ahead of Kvyat, Hulkenberg and Bottas to start to chase the leaders.

After the first round of pit stops Hamilton was up to fifth behind Ricciardo with both showing good pace but comfortably adrift of the leading trio. Hamilton managed to get ahead of the Red Bull using DRS after Ricciardo had a slide in the final corner, and then the complexion of the race changed.

With Raikkonen losing time due to an MGU-K failure, Rosberg was already closing the gap when Hulkenberg's front wing failed on the pit straight, dropping under the car and causing the Force India to slide head-on in to the tyre barrier. Hulkenberg was unhurt in the incident but the subsequent Virtual Safety Car was upgraded to a full Safety Car due to debris on track.

By now Hamilton was up to fourth place, with the top four all switching to medium tyres for the final stint and Ricciardo fifth on softs. On the restart, Rosberg immediately passed the ailing Raikkonen but behind them Ricciardo attacked Hamilton around the outside of Turn 1. Hamilton locked up and hit the Red Bull, damaging his front wing which dropped him back and also earned him a drive through penalty.

With Raikkonen retiring, Ricciardo was promoted to third and closed up on Vettel and Rosberg. Kvyat was also within striking distance as four seconds covered the top four, while Hamilton attempted to fight back through the field in the closing laps.

Ricciardo was never really close enough to attack Rosberg until five laps from the end, when he attempted a late lunge in to Turn 1. Running deep in to the corner, Ricciardo was still on the track and Rosberg cut back to the racing line, touching the the Red Bull's front wing and receiving a puncture.

Rosberg had to do a full lap with the punctured tyre while Ricciardo also needed a new front wing, promoting Kvyat to second place and leaving Vettel to ease home in the final few laps. Rosberg was relegated to the lower points and crossed the line eighth, with an investigation deciding no further action was required for the collision.

Verstappen came home fourth having clipped the rear of Valtteri Bottas' Williams at Turn 5 when a group of cars bunched up behind the ailing Hamilton at the Safety Car restart. Bottas was left with a puncture but Verstappen escaped major damage and inherited a number of places in the chaotic closing laps.

Fifth place for Alonso marks McLaren's best result of the season, though the team will admit the drama ahead played a big part in the result. While both McLarens scored, Williams failed to get either car in the top ten due to Bottas' puncture and a scruffy race from Felipe Massa, who stopped short of his grid slot at the start of the race to cause an extra formation lap and receive a time penalty.

Speaking of penalties, Pastor Maldonado managed to accumulate an incredible two drive throughs as well as a 10 second time penalty. Maldonado was guilty of causing a collision with Sergio Perez at Turn 1 - with the Force India retiring after Hulkenberg's failure - as well as speeding in the pit lane and overtaking behind the Safety Car.

Rosberg had been set to take a big chunk out of Hamilton's championship lead, but the late chaos eventually saw Hamilton extend his advantage to 21 points, while Vettel closes to within 42 points of the lead with his second win of the season.

Vettel dedicated his victory to Jules Bianchi, with all three drivers on the podium emotionally speaking about the Frenchman. 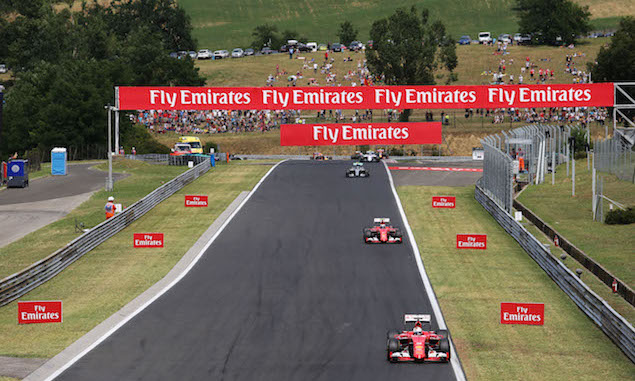