McLaren executive director Zak Brown has put his support behind the idea of a London Grand Prix.

"I would love to see a London GP," Brown told the Daily Star newspaper this week.

However, Brown added that in his view, any street race held in the city must look recognisably London-based if it's to succeed.

“With any street track you want to be able to pick up some key identifiers so you know exactly what city you are in," he said.

"Any time you get into street racing you want to be able to recognise the city.

“Whether you go past Buckingham Palace or Big Ben I have no idea," he added. "But you want to be able to turn on the race and say: 'That is London'."

Past proposals for a London street race have included both landmarks as well as the Houses of Parliament. The Mall has emerged as the leading candidate for the placement of the start/finish line.

A London Grand Prix has been mooted for many years. Former Formula 1 boss Bernie Ecclestone talked up the idea in 2012, which was supported by then-Mayor of London Boris Johnson. His successor Sadiq Khan has said London is "open" to hosting world sporting events.

A recent change in the law has removed some obstacles to a Monaco-style race, which could boost London's economy by up to £100 million.

However he was cautious on whether a London race would be viable. He noted that he already had "a page-long list of places that would like to have races."

Mercedes confident there will be no driver fall-out in 2017 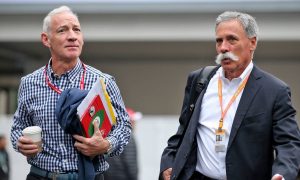