Swiss driver Nico Müller put in the fastest lap of the day as Formula E staged its first rookie test.

The 25-year-old DTM driver was almost a full second faster than anyone else. He completed 52 laps and set a time of 1:19.651s in the Audi Sport ABT Schaeffler on Sunday on the 12-turn, 1.86-mile Marrakesh ePrix circuit.

His time was even faster than the pole position lap recorded by Sebastian Buemi on Saturday, albeit in cooler conditions. It was a new lap record around the Circuit International Automobile Moulay El Hassan

Pietro Fittipaldi, grandson of two-time Formula 1 champion Emerson, was second fastest in the afternoon. After 34 laps, his time of 1:20.597s was six hundredths faster than Maximilian Gunther in the Penske Dragon.

Williams' test and development driver Paul di Resta was fourth fastest in the session with a time of 1:20.774s. It was a big improvement on his morning time of 1:22.343s, which had been the fastest of the first session.

Techeetah prospect James Rossiter had been second fastest in the morning. He was one place behind di Resta again after lunch as well.

Daniel Juncadella managed sixth-fastest for Mahindra. His best lap was two thousandths of a second faster than Sauber reserve driver Antonio Giovinazzi at the wheel of the Jaguar.

Andrea Caldarelli was eighth fastest in the Penske Dragon. His car needed major repairs after crashing in the morning to bring out the first red flag of the day.

The 22-year-old Dutch driver had completed only two laps in the morning due to "technical issues" on the Audi Sport Abt. It was the same car that let Lucas di Grassi down in Saturday's race, and it clearly still had issues.

De Vries was kept waiting again after lunch. However the Audio crew finally got to the bottom of the problem, and he was able to get on track to complete 33 laps with a best time of 1:20.971s.

The only other stoppage of the morning had been down to a dog getting onto the track. That red flag came out shortly after BMW DTM driver Bruno Spengler had crawled to a halt in the Andretti.

In the afternoon there were further pauses in the proceedings triggered by Formula 3 champion Mitsunori Takaboshi in the Renault e.dams, and development driver Michael Benyahia in the Venturi. Spengler also triggered another stoppage. The three finished at the bottom of the afternoon times as a result. 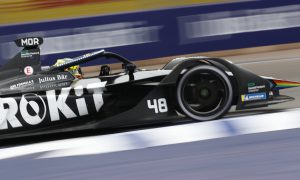