Motorsports legend and maverick Dan Gurney, the only American to win in F1 in an American car, has passed from complications of pneumonia at his home  in Newport Beach, California, at the age of 86.

Racing has always offered its unfair share of injustices, and Dan Gurney is widely regarded - along with Stirling Moss - as the most talented and worthy Grand Prix driver never to win the Formula 1 World Championship.

In spite of this inequity, Gurney's impact on motorsports was huge as a driver, team owner and manufacturer. And he won races doing all at the same time. He won in sports cars, stock cars, Indy cars and in Grand Prix cars. Versatile as well as fast, he was the ultimate all-rounder, just as Mario Andretti would be later on.

Born in Port Jefferson, New York in 1931, the son of a Metropolitan Opera singer, Gurney's first competitive drives were for team owner Frank Arciero on the West Coast sports car scene and caught the attention of Luigi Chinetti, a man close to Enzo Ferrari, who secured a seat for Dan on the Scuderia's sports car team in 1958.

Good results enticed Ferrari to channel Gurney's talent to F1, with the lanky driver getting his first ride in the 1959 French Grand Prix at Reims, where the 28 year-old rookie with only 20 race starts under his belt started his run up the Formula 1 ladder.

"I was scared to death," Gurney once remembered.

"Twenty races and driving for Ferrari in Formula 1! I had almost given up and gone home at that stage, but Phil Hill helped a lot and encouraged me to hang on.

"When it finally did happen, it came with a giant rush, even though that first race ended after 20 laps with a pierced radiator."

He finished second in his next start with the Scuderia, third in his third and fourth in his fourth. It was a remarkable debut, mocked by Gurney when he said, "I was going downhill fast! And never stopped."

He thought however that he would get more consideration and understanding from an English-speaking team, and left Ferrari to go to Britain and accept an offer from BRM for 1960. All he got was a headache in a season marred by retirements. 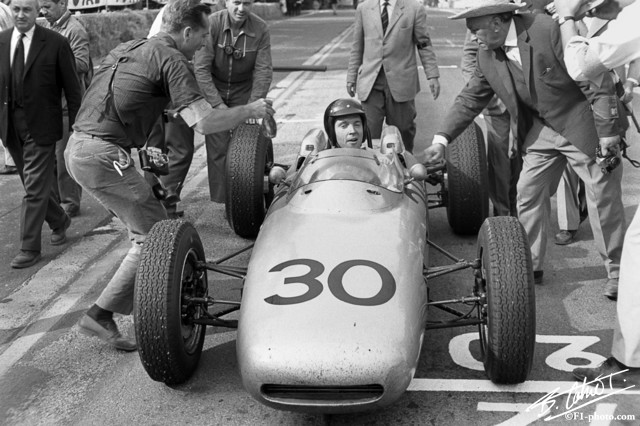 He signed with Porsche the following year, achieving three second place finishes, losing by only a tenth of a second to Giancarlo Baghetti's Ferrari in France. A year later, this time at Rouen, he delivered the goods and clinched his first Grand Prix victory and the first for Porsche.

"That was a lucky win," he recalled. "But sometimes it's better to be lucky than good. The car was down on horsepower and the leaders got away, but one by one they broke down or slowed, and I wound up a surprised and very happy winner."