Sergio Perez says he can race with the best but doesn't understand why he's never mentioned as a possible candidate for a plum drive in Formula 1.

The 28-year-old Mexican started his Grand Prix career with Sauber in 2011 and looked set for stardom when he was recruited by McLaren in 2013.

It didn't pan out as expected however for Perez who left the Woking-based outfit after just one year. In hindsight, it was perhaps for the better as McLaren had initiated a five-year winless period and performance slump which persists to this day.

Perez restablished himself at Force India as a fast, solid and consistent racer with a wealth of experience under his belt, but oddly not as a man coveted by F1's front-runners.

“I don’t know the reason for that,” he says.

“I think I’ve been doing a very strong job in the past seasons so in that side there is not a lot I can do. It’s hard to show.

“I finish in the last two years seventh in the championship, in the front mix. So it’s hard for people to realise but I’m sure when they look at the performance.

“It’s not a coincidence I’ve beaten good drivers such as Hulkenberg, the time we spent together. I believe I can be as good as anyone out there.”

Perez isn't giving up on his ambitions of moving up to the next level, although Force India's current level of performance isn't making that big step up any easier to achieve.

“I still have my aim one day I will get the chance to fight for the best possible results because I believe I am as good as anyone here,” he said.

“But in Formula 1 it’s so much down to the potential of your team and your car. I hope that soon I can get an opportunity to show my full capacity.” 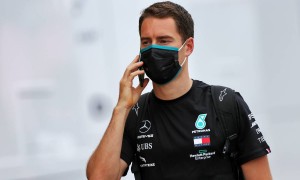