The trio led Mercedes' Lewis Hamilton, running for the first time this weekend on Pirelli's hypersoft tyre, Daniel Ricciardo and Valtteri Bottas, with all fastest times set on the pink-rimmed rubber.

Friday's practice was all about Red Bull and Max Verstappen, but its Mercedes and Ferrari rivals were eager to test changes implemented for the final dress rehearsal before this afternoon's all-important qualifying session.

The Scuderia's Kimi Raikkonen was the first man to put a relevant time on the board, his hypersoft-shod SF71-H clocking in with a 1m12.931s, while Red Bull's Daniel Ricciardo first effort left the Aussie 0.237s off the Ferrari's pace.

Stoffel Vandoorne triggered a yellow flag in the first 15 minutes of running after he locked up and overshot the Turn 3-4 chicane. Meanwhile, Sebastian Vettel demoted his team mate at the top of the timesheet, beating the Finn by 0.124s.

Mercedes were up and running three quarters through the session, initially cruising on the ultrasoft tyre until Hamilton upped the ante to put himself P3, 0.363s off Vettel's fastest lap.

The Silver Arrows squad was clearly trying to assess whether they can get through Q2 this afternoon without resorting the hypersoft, and the first indications appeared that they could.

A few worries crept in at Red Bull, with Ricciardo receiving persistent 'fail' codes linked to his engine software, but the Aussie kept up the pace unabated, lining up fifth on the ultrasofts just behind his team mate.

Ferrari continued to make good use of the hypersoft, with Raikkonen overtaking Vettel at the top of the timesheet with a lap in 1m.763s, but for the first time this weekend Mercedes took Pirelli's softest tyre for a spin, with Bottas' first relevant time on the compound good for P5.

Vettel reversed the order at the front however, edging out Raikkonen by a mere 0.002s. Hamilton appeared to be on a serious charge as he put the hypersoft through its paces for the first time, but backed off before the end of his lap.

His second flying lap was better, and put the Mercedes driver within 0.058s of Vettel. But shortly later, Verstappen jumped to the front once again, pipping the Ferrari driver by 0.049s to lead FP3!

Behind the Red Bull-Ferrari-Mercedes usual suspects - all covered by just 0.656s - it was Sergio Perez in seventh place for Force India followed by Renault's Nico Hulkenberg, Haas' Romain Grosjean and McLaren's Vandoorne.

No collusion between Mercedes and Force India says FIA 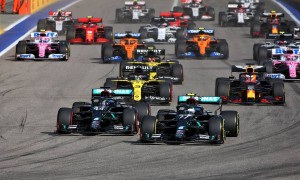 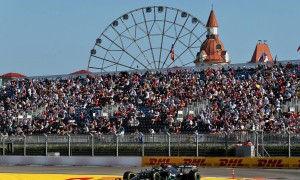