A dramatic turn of events in the 2018 German Grand Prix saw Lewis Hamilton pick up a remarkable, hugely unexpected victory at Hockenheim to regain control of the drivers championship.

Having started from 14th place, Hamilton used a long first stint to allow him to benefit from short, sharp showers that swept over the circuit in the second half of the race.

He took the lead after longtime leader Sebastian Vettel slid off the greasy track in the stadium section and ended up in the barrier on lap 51.

Valtteri Bottas had fresher tyres for the final part of the race, but was ordered by Mercedes to maintain position rather than fight his team mate for the lead. The pair were joined on the podium by Ferrari's Kimi Raikkonen.

When the lights went out, Sebastian Vettel's Ferrari confidently leapt away from pole position on the grid to lead the field into turn 1, with Valtteri Bottas slipping into second place for Mercedes. Kimi Raikkonen appeared to have trouble matching the lead pair's pace and was soon being made to work hard to fend off advances from Red Bull's Max Verstappen in fourth.

Kevin Magnussen held on to fifth place, but his Haas team mate Romain Grosjean ran wide in the first corner and surrendered a position to Renault's Nico Hulkenberg. Sergio Perez had got off to a good start, the Force India jumping up two places to lead Carlos Sainz and Charles Leclerc by the end of the first lap.

The Sauber driver was having to keep half an eye on his rear view mirror for the inevitable approach of Lewis Hamilton. Having started from 14th on the grid, the Briton utilised DRS to pass Leclerc on lap 4 to enter the top ten.

The other man significantly out of position on the grid - Daniel Ricciardo - had got off to a poor start initially on medium tyres and dropped to last place, but had since picked up four places as the Red Bull started to find its rhythm. 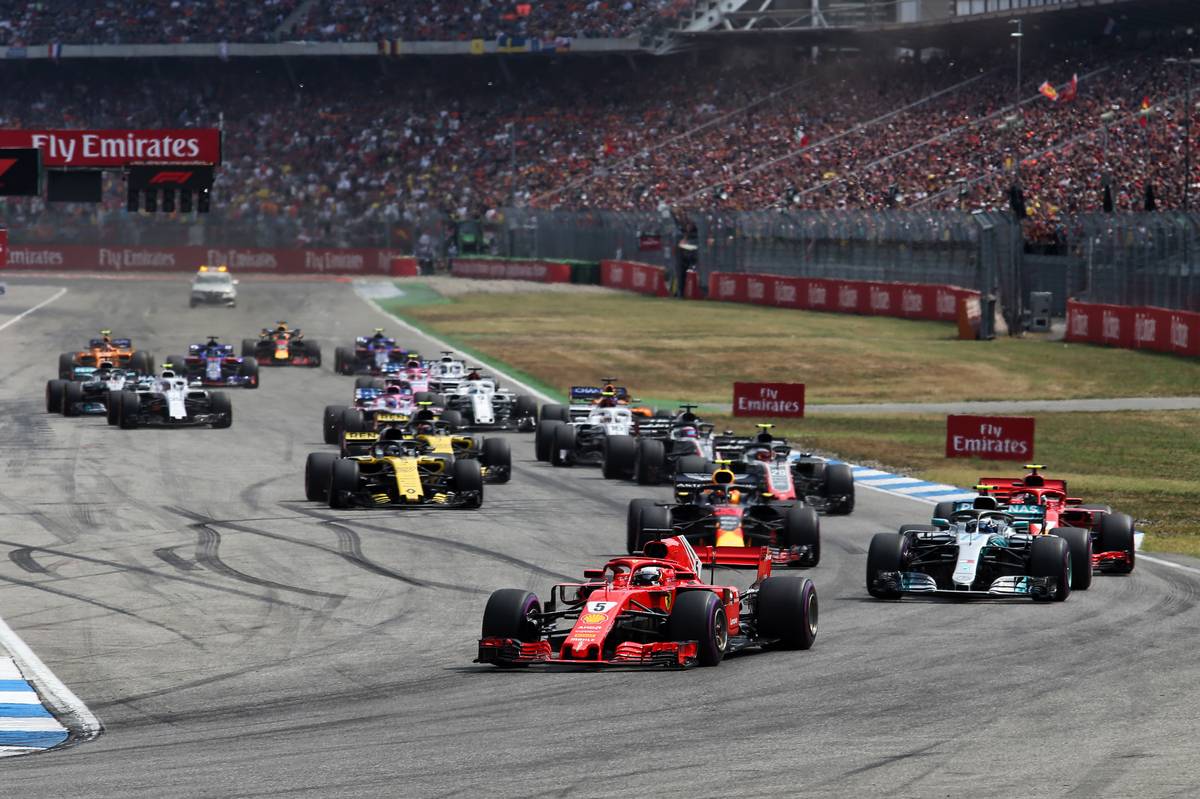 The front half of the grid had started on ultrasofts, and even though temperatures were not a match for Friday the tyres were soon showing distinct signs of overheating and blistering. However, with the skies overhead filling with dark clouds, teams were reluctant to call their cars in for an early service in case a sudden downpour turned the race strategy on its head.

Ten laps into the 67-lap race, Vettel had pulled out a four second lead over Bottas with Raikkonen having secured third from Verstappen and Magnussen. Hamilton was busy moving up to sixth place ahead of Hulkenberg and Perez, while further back Ricciardo was now up to 13th.

Raikkonen was the first of the leaders to pit on lap 15 for a switch to soft tyres, a move seemingly designed to provoke a response from Mercedes. The Silver Arrows didn't take the bait and Bottas stayed out. Raikkonen came back out on track after a slight delay fitting the right rear, now only a couple of seconds ahead of Hamilton who had just passed Magnussen for fifth place.

Magnussen came in shortly afterwards in response to Hulkenberg pitting from seventh, with Sainz and Leclerc soon following suit. Perez also made his first visit to pit lane, but a slow service undid all his sterling work on the track. Along with nice overtaking moves on Leclerc and McLaren's Fernando Alonso, those pit stops helped Ricciardo climb into the top ten and he was now in sixth behind Hamilton, although the Red Bull was still some 25 seconds behind the Mercedes.

The leaders had stayed out, but Vettel finally made his move to pit lane on lap 26. He slotted back in between Raikkonen and Hamilton in fourth place having taken a new set of soft tyres, which he did no favours by locking up badly two laps later.

Bottas had just pitted on lap 29 when Daniel Ricciardo also came to a stop. Unfortunately for the Australian it was out on the track rather than on pit lane, the RB14 pulling over by the side with a loss of power to become the first retirement of the afternoon.

Moments later his team mate Verstappen pitted from the lead for a new set of soft tyres. He came back out in fifth place behind Bottas. Control of the race was now in Raikkonen's hands, the Finn running just over a second clear of Vettel with the yet-to-stop Hamilton in third place having started the race on softs. It meant that he was able to run deeper into the race as a result, and Mercedes were still hoping that rain would come to their man's aid. 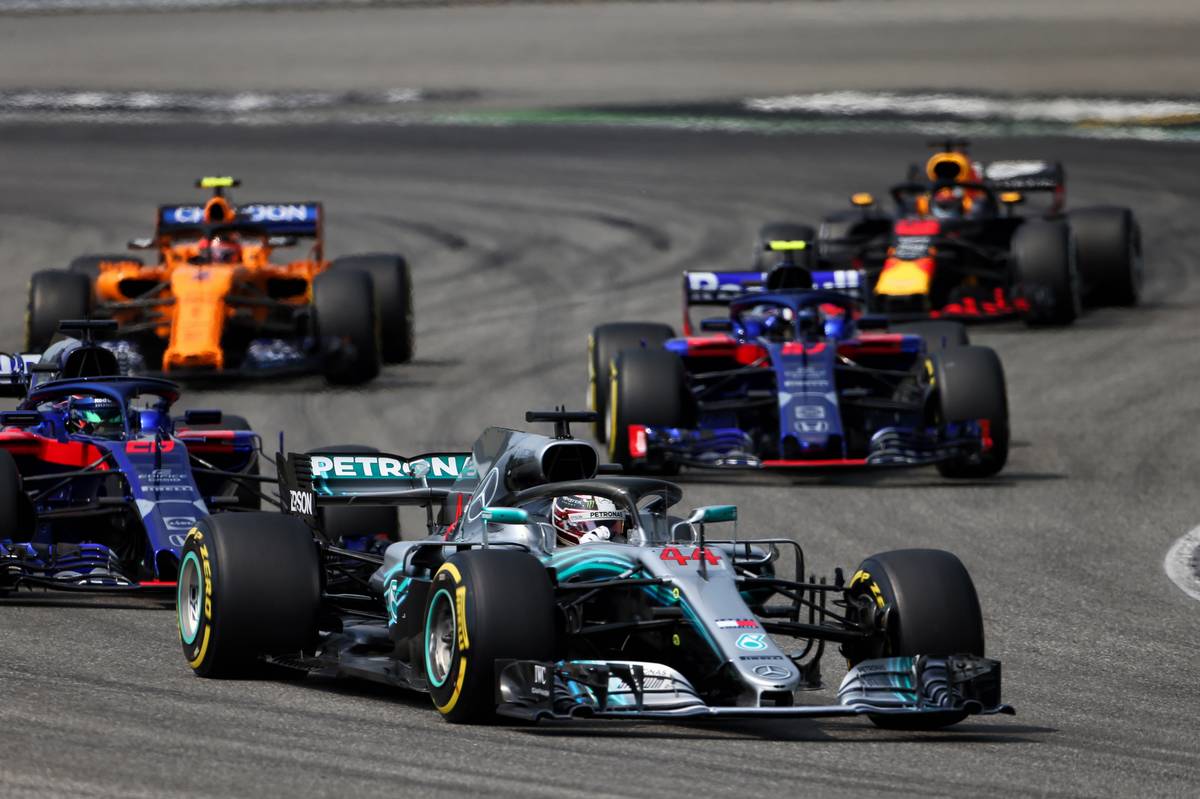 Vettel was growing increasingly frustrated at being held up behind his team mate, and pleaded with the Ferrari pit wall to issue team orders. It fell to the team's chief engineer Jock Clear to give Raikkonen the bad news: the Finn stubbornly forced him to spell out the order before duly complying on lap 39.

The rain had still not materialised by the time that Hamilton reached end-of-life status with his tyres, forcing him to pit for ultras on lap 42. It dropped him to fifth place, but gave him the newest, fastest rubber of the leaders.

Just minutes later the rain finally arrived at the far end of the circuit around the hairpin. Several drivers including Leclerc, Alonso and Toro Rosso's Pierre Gasly all made immediate moves for wet weather tyres even though the majority of the Hockenheimring remained largely dry. Red Bull made the same call for Verstappen on lap 46.

Vettel told the Ferrari pit wall that he wanted to stay out for the time being, despite having sustained minor damage to his front wing running over the aggressive kerbs. It was evidently the right call as the rain disappeared as quickly as it had appeared, and the cars that had stopped for intermediates were soon back on pit lane to restore slicks. Naturally the minute they did so, the rain started to pick up again for a brief encore in sector 1.

Despite the tricky conditions, Vettel now had a six second lead over Raikkonen and Bottas who were duelling over second place. Determined to show he could be as aggressive on track as his team mate, Bottas pulled off the move on his fellow Finn to claim second place on lap 51 as Hamilton rapidly closed in the pair from fourth place.

Vettel still looked to have the race under control when he suddenly lost grip in the stadium section and ran off into the gravel. The car ended up embedded in the barrier, Vettel thumping his steering wheel with frustration as he realised his race was over. A safety car was immediately deployed and a number of cars responded by diving for pit lane for fresh ultras.

Hamilton initially appeared set to join them on pit lane only to abort at the last second. Replays of the radio communications from the Mercedes pit wall revealed a confused and contradictory stream of panicked messages, with Hamilton not at all happy with the outcome and believing that he should have come in after all.

The race resumed with ten laps to go, and sure enough Hamilton was immediately under attack from Bottas into the hairpin. He robustly protected his lead and Bottas was ordered by the team to settle back into second ahead of Raikkonen, Verstappen, Hulkenberg, Perez and Ocon. More rain threatened to sweep over the circuit on the final lap, but ultimately held off. 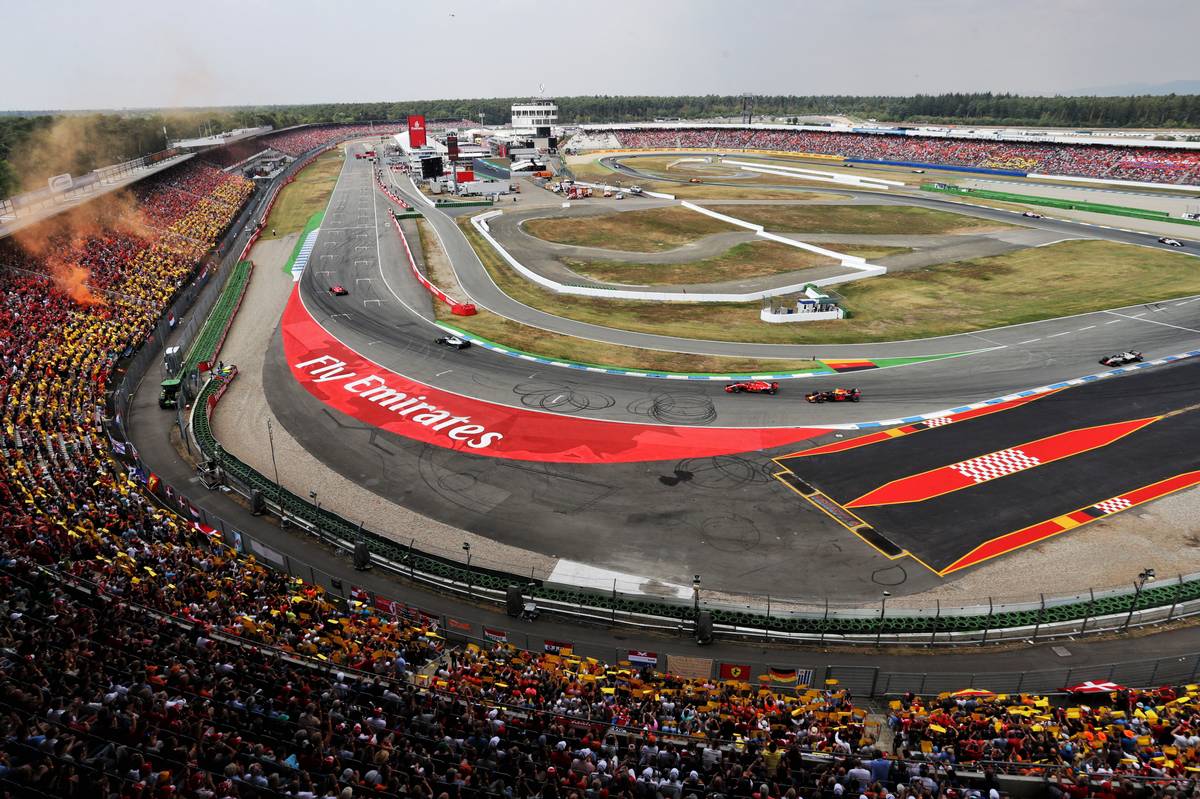 Marcus Ericsson restarted eighth for Sauber, his team mate Leclerc having spun twice during the wet spell and tumbled to last place as a result. He would eventually lose a position to Grosjean who was on a late charge to finish in sixth place. Toro Rosso's Brendon Hartley claimed the final point after pipping Magnussen and Sainz to tenth.

Out of the race completely were the two Williams of Lance Stroll and Sergey Sirotkin, who retired during the safety car period with concurrent technical issues. Fernando Alonso also failed to make the full race distance, although his McLaren team mate Stoffel Vandoorne survived to the end despite being order to park the car midway through the race