Sebastian Vettel's win in the 2018 Belgian Grand Prix never looked in doubt from the moment he was able to blast past polesitter Lewis Hamilton on the opening lap of the race.

"I really enjoyed the race," Vettel said afterwards. "To get time on this track is always quite nice - in a great car as well!"

Sunday's win means that Vettel has now won 52 Grand Prix races in his time in Formula 1, moving him ahead of Alain Prost to third place in the all-time wins list. “More wins than Alain? Wow,” he remarked when informed after the race.

The result was effectively sealed when Vettel was able to overpower Hamilton in the run up to Eau Rouge and along the Kemmel Straight into Les Combes.

“Very happy with how the start went. Turn 1 was crucial to set everything up," he commented. "I am not sure Lewis saw me. He pushed me quite far to the left, but I knew my chance would be later on, up the hill.

“I think the timing was right" he remarked. “I managed that perfectly, I thought, but then the Force India came as well but as soon as I was ahead I was quite relieved."

"Last year I was always ending up short," he recalled. "It seems like it was better this year because we had a little bit less wing, and timing is crucial."

Vettel agreed that a new power unit upgrade had played its part.

"We had a new engine this weekend which gave us a little bit more power, and I like to think a little more help and boost down the straight. It's good to see it all comes together when it works.

Immediately after the pass was completed the race was placed behind the safety car due to the big first corner accident involving Fernando Alonso, Nico Hulkenberg and Charles Leclerc. Vettel came under pressure from Hamilton at the restart, and found he had a fight on his hands.

"The safety car came and it was the other way round," he said. "I had a good restart, a very good exit off the first corner and I kept it clean. It was tricky with the tailwind, braking for the first turn.

He was eventually able to fend off the Mercedes. Hamilton's final chance came during the round of pit stops when he sought to undercut the Ferrari.

"Lewis pushed very hard, towards the end of the first stint he was very fast," said Vettel. "We had the pace - it was very close in the first stint and I think there was only a couple of seconds between us.

"But a great pit stop, so there was no chance [for Mercedes to jump them]," he said. "It felt so quick. Green already? Okay go. Then I checked that someone was waving because it felt so quick!"

The Ferrari did indeed come back out on track in front, and from that point on appeared to have it all his own way for the rest of the afternoon.

"After that it was a very smooth race," he agreed. "The second stint I could turn everything down a little bit and control the pace a bit 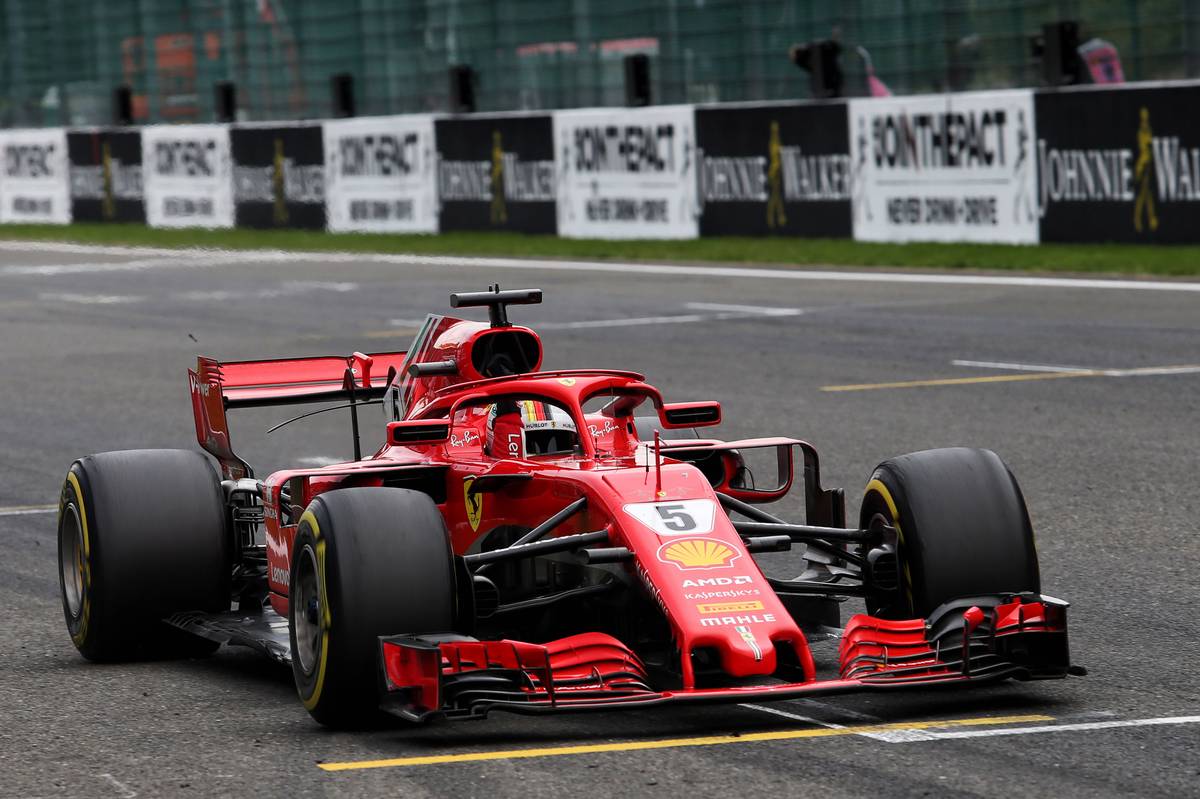 "Going through traffic I was a bit fortunate that I got them on the straights so I didn’t lose much time.

"But I could see that [Hamilton] wasn’t really pushing anymore, the last 15 laps, so I could relax a bit more. But it was quite tricky," he insisted.

The dominant display at such a power-hungry circuit as Spa-Francorchamps bodes well for Ferrari at their home circuit Monza next weekend.

"Looking forward to going to Italy," he said. "Racing in Italy is special for us with it being Ferraris' home race so it should be a lot of fun.

"We had our deficits last year," he conceded. "We had a car that worked well on twisty tracks where a lot of downforce was required. But we were missing out on tracks where the car needs to be more efficient, like here and Silverstone and a couple of other tracks.

"This year the car seems to be more robust in that regard and seems to work everywhere," he said. "On all fronts I think we've made a step forward.

"But yes, it's key to have a car that works everywhere because that's been our weakness and I think we've tackled it fairly well."

Hulkenberg owns up to first lap mistake, but gets big penalty