The German enjoyed a good launch off the grid, but could not overhaul a Silver Arrows pair that worked together at the start to keep the Ferrari at bay.

Fourteen laps into the race, an undercut allowed Vettel to gain the upper hand over Hamilton, but the edge was short lived.

"We surprised them with a very good out-lap," Vettel explained.

"We managed to surprise Lewis [Hamilton] but then Valtteri [Bottas] was backing off and we struggled a bit in the last sector so Lewis was close.

"Then he had a run into Turn 2. I managed to cover but then I didn’t see him through the left-hander [Turn 3], I wasn’t really sure where he was.

"I saw that he was somewhere on the outside but then I think you also need to be fair enough and give room, even if I didn’t want to, to make sure it remains hard but fair."

From there on, Vettel remained in contact with the Mercedes duo which had swapped places, but without the ability to get close enough to challenge their leadership.

"I tried at the end to put pressure on Valtteri but yeah, I could not get close enough. Anyways, it was a good race. I think we were closer today but obviously not the result we wanted." 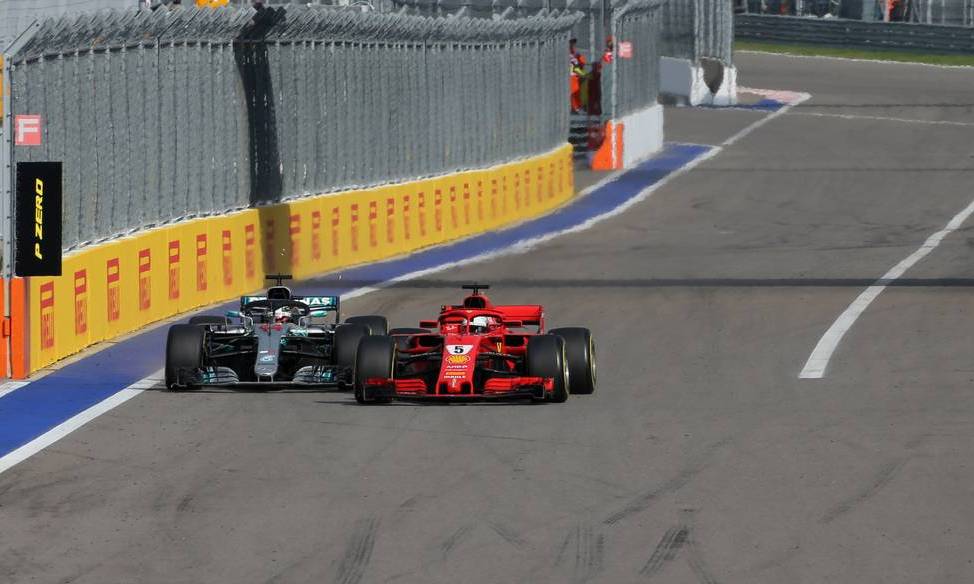 Vettel's deficit in the title fight has now swelled to 50 points with five rounds to go, yet the four-time world champion isn't giving up all hope of turning around his fortunes.

"Obviously we lose points, one weekend or another it doesn't help, but we have our plan in terms of bits and steps that are coming in terms of car.

"Engine-wise it's done because we have used three engines and there's not another new engine coming.

"We hope to make some progress and maybe the next couple of tracks are better for us, who knows, I think we need to see ultimately when we get there."