Both men have opted for eight sets of the pink hypersoft tyres for the race weekend at Autódromo Hermanos Rodríguez on Sunday October 28, along with three sets of purple ultrasofts.

The remainder of their respective 13-set allocations of tyres for the event is made up by two sets of the red-walled supersoft compound.

Vettel's Ferrari team mate Kimi Raikkonen makes the same selection as the two leading drivers, while Valtteri Bottas tweaks the selection on the second Mercedes by taking an extra set of ultras and just the one default set of supersofts.

It's been unusual to see the two teams in such close agreement when it comes to making their tyre selection for a race.

Ferrari has been tending to go more aggressive than its opponents, preferring to stock up on the softest - but least durable - of the three compounds on offer from Pirelli. Mercedes have been more conservative in their selection, perhaps fearing that the W09 is still rather heavy going on its tyres in race trim.

Along with the top four, only Fernando Alonso has requested eight hypersofts for Mexico. The McLaren driver then prefers to take three sets of supersofts, leaving room for just two sets of ultras in his hand luggage.

His team mate Stoffel Vandoorne drops one set of supersofts from his consignment in order to add a ninth set of hypers. Drivers from Red Bull, Force India, Williams, Toro Rosso also opt for nine sets of the pink compound.

Max Verstappen, Sergio Perez, Esteban Ocon, Sergey Sirotkin, Pierre Gasly, Brendon Hartley and Romain Grosjean all follow Vandoorne's lead in taking a balanced approach to the rest of their allocation, with two sets each of supersofts and ultras.

Daniel Ricciardo, Lance Stroll and Kevin Magnussen take a different view and have asked for three sets of ultras to go with just the one mandatory set of supersofts.

Only two teams - Renault and Sauber - go to the extreme of asking for ten sets of the hypersoft compound for Mexico.

Nico Hulkenberg and Marcus Ericsson take two sets of ultras and just one of supersofts, while their respective team mates Carlos Sainz and Charles Leclerc take the contrary view.

Last year’s race was won by Verstappen on a one-stop strategy, starting the race on ultrasofts and switching to supersofts during the afternoon. However, this year's compounds are said to be on average one stop softer than last year's same-named tyres. 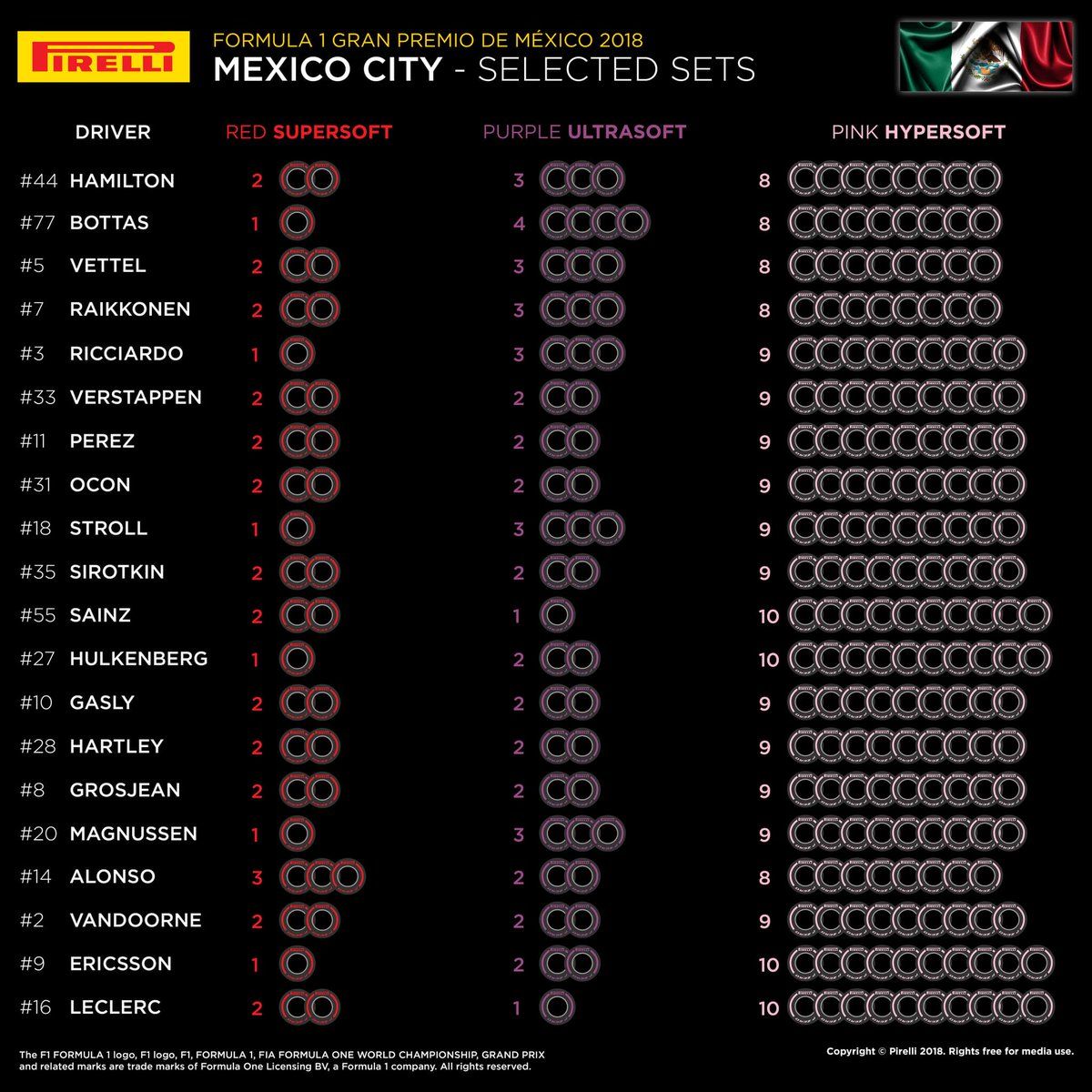