BMW has confirmed its place at the top in this week's official pre-season 5 test for the ABB FIA Formula E championship, sweeping all three days at the Ricardo Tormo Circuit in Valencia, Spain.

Alexander Sims had led the charge for BMW on Tuesday, and he was back in charge again on the last day of testing on Friday. He finished the final session two tenths quicker than reigning champion Jean-Eric Vergne, with a best time of 1:17.402s set late in the afternoon.

His fellow BMW driver Antonio Felix da Costa had already succeeded in setting the fastest time of anyone for the week, with a lap of 1:16.977s which was posted on Wednesday morning.

The final day of the test started with wet track conditions, which slowly dried as the hours went by. It meant that most of the quickest laps were set shortly before the chequered flag came out.

Mitch Evans put a smile on the faces of everyone at Jaguar by finishing the day third fastest ahead of Mahindra Racing's new signing, former DTM and F1 driver Pascal Wehrlein.

Maximilian Gunther was fifth fastest for Dragon ahead of Virgin's Robin Frijns and HWA's Gary Paffett. Sam Bird was eighth in the second Virgin ahead of Nissa's Sebastian Buemi and Audi's Lucas di Grassi.

Venturi's new driver Felipe Massa brought out one of six red flags during the day when he stopped out on track during the final hour. His team mate Edoardo Mortara was even less lucky, a technical problem keeping him sidelined for the whole final afternoon session.

Daniel Juncadella was in for Stoffel Vandoorne in the second HWA as the Belgian headed to Austin for the United States Grand Prix. He had missed all of Tuesday afternoon's session due to battery problems but was 13th fastest on Wednesday.

Final times from day 3 of the pre-season test 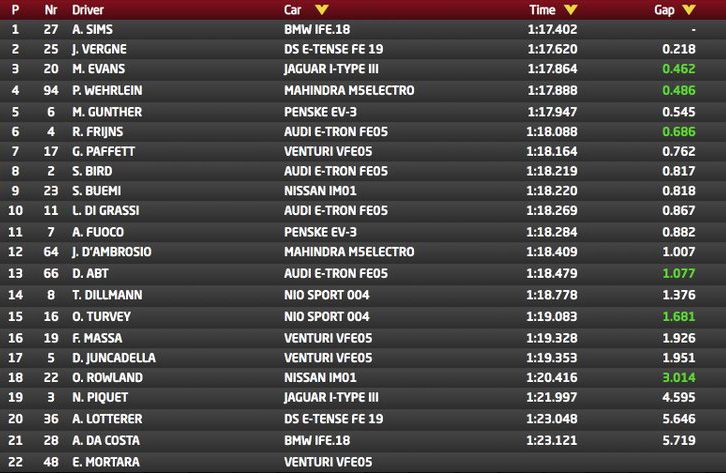 Kubica signals he's running out of patience at Williams